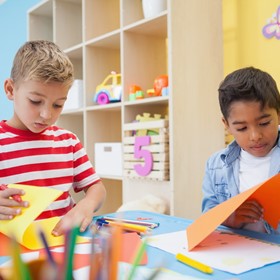 Making has finally made it in education.

The grassroots movement that inspires learning through tinkering, trial and error, and problem solving is finally taking hold in classrooms around the world.

And that’s great news to Dale Dougherty, executive chairman of Maker Media, founder of MAKE Magazine and a key player in the maker movement.

But that doesn’t mean it’s time to sit back and declare victory.

“We’ve been saying this should happen, and it’s happening right now,” Dougherty says.

Education leaders are telling him that they’ve never seen anything like it — the collaboration, the excitement and the sense that making’s moment has arrived.

“In some ways, it’s a counter-revolution to the standardized testing that’s been thrust on schools,” Dougherty explains.

The revolutionaries are armed with evidence that making can drive learning, connect students to science and technology, and speak to all kinds of students.

Dougherty says the next step is to accelerate the movement into more schools and make it available to more learners. That will require addressing issues like funding and lack of understanding from those in education who might still be asking, “Why are we doing this?”

The maker community’s vision is to incorporate making into every class, not just makerspaces, and to create an environment where teachers think more broadly about how to engage students around projects.

“With making, kids feel a sense of agency that they can do something, and it matters to them to do it,” Dougherty says. “They can collaborate with others. They can go on their own and figure it out. It’s the maker mindset that is the gift.”

Dougherty joined superintendents, teachers, tech directors, STEAM experts, corporations and the U.S. Department of Education to discuss the “why” behind making at the MAKE: Education Forum on Sept. 25 at the New York Hall of Science. Watch the full forum, here. The forum explored different facets of making in education through a series of panels, informal discussions and networking opportunities and preceded the World Maker Faire, Sept. 26-27, 2015 in New York.