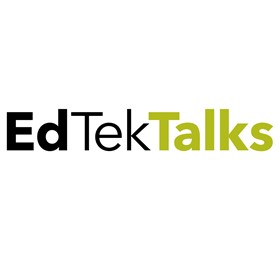 Harvard researchers spent six years studying innovative entrepreneurs to find out how their creative processes work. What they found was that the number one skill all innovators practice regularly is connecting across a variety of disciplines. In other words, innovators are people who cross-pollinate, or use ideas from other industries to spark their own creativity.

With that in mind, ISTE reached out to inspiring people from a range of fields and asked them to share their insights in mini-keynotes called EdTekTalks. This provocative series of five talks includes futurists, designers and entrepreneurs from beyond the world of ed tech.

Dale Dougherty
Dale Dougherty talks about why so many people are drawn to Maker Faires and why it's vital to bring making back to school. As founder of Make magazine and the mind behind Maker Faire, Dougherty brings the do-it-yourself mindset to everyday technology, celebrating the right to tweak, hack and bend any technology to your will.


Emily Pilloton
Emily Pilloton founded Project H to develop effective design solutions for people who need it most. Her work in Bertie County, North Carolina, the poorest and most rural county in the state, was the subject of the nationally released documentary, " "If You Build It." "

Guy Hoffman
As co-director of the IDC Media Invention Lab, Guy Hoffman explores the humanity of robots — how they think, feel, act and move as they interact with humans. His work has been named one of TIME magazine's Best Inventions of the Year.

Shaherose Charania
Shaherose Charania's passion for technology and making a positive difference in the world inspired her to create Women 2.0, a media brand at the intersection of women, entrepreneurship and technology that's designed to foster the next generation of technology leaders. In 2010, she was recognized by Fast Company as one of the Most Influential Women in Technology.