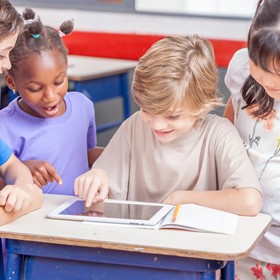 For tech director Phil Hintz, the district’s decision to go 1:1 and give all 2,200 students in his district access to 24/7 learning was a challenge he eagerly accepted. After all, Gurnee School District in the Chicago suburbs was already a 1:3 district and had been an Apple district for 20 years.

As the director of technology, Hintz’s decade of experience in boosting tech infrastructure was the right skill at the right place at the right time.

In May 2012, the district handed iPads to 200 teachers to test drive over the summer. All the educators had to do was attend a two-hour training course and turn in six app reviews by the time school started again.

It was a huge success. Hintz used the nearly 1,200 reviews to determine which apps to load onto the 200 iPads that students would get in the fall as part of the district's initial pilot.

Two weeks into the school year, teachers already reported that students were accessing information a lot more readily, their classrooms had gone completely paperless and the virtual office hours they were hosting in the evenings via Edmodo were a huge hit. Student engagement was way up and the absentee rate dropped to the single digits.

As the 1:1 initiative progressed, everyone felt the energy.

Teachers with little technology experience were finding apps like Nearpod to successfully guide students through their lessons. Using the tool, teachers can send math problems or writing prompts from their iPad to student iPads and watch each student work in real time in a thumbnail view. Nearpod also allows for digital classroom management.

In another class, an 11-year-old boy was unable to upload his video to Dropbox because of its size, so he taught himself how to use iTunes U to get around that limitation.

For example, when it came time to renew the K-5 science curriculum, the district decided to forego the textbook.

“We created our own science books and integrated them with video to create totally interactive science books of our own,” he said. “Now, we have 29 units of science instruction in K-5.”

This year, Gurnee plans to hold a filmmaking festival where students make their own informational videos that will be embedded in digital books on topics such as simple machines and the plant growth process. They intend to release the books in the iBooks Store to make them available to others.

Hintz knows it’s not about devices, but rather transforming learning and teaching – something he’s seeing reflected in test scores.

After the implementation, the district wanted 62 percent of students to meet or exceed their growth targets on districtwide formative assessments. It dangled a 1 percent monetary bonus to employees if that happened. The scores came in at 71 percent in math and 64.5 percent in reading.

As for Hintz, his role in the 1:1 implementation earned him the ISTE 2015 Outstanding Leadership Award. He’s also been honored as the 2015 Technology Director of the Year by the Illinois Computing Educators, an ISTE affiliate.

With only six people in the tech department, his plate is full, but he is not alone. He considers ISTE membership the world’s largest PLN. “It’s been a fantastic way to network, and is my No. 1way of receiving ongoing professional development for myself,” he said.

The continual learning focus has also led to district awards like the Apple Distinguished Program for innovation, leadership, and educational excellence for 2015-17 and 2013-15 and admittance into the Digital Promise League of Innovative Schools.

Superintendent John Hutton says no one has played a greater role in district’s ed tech leadership than Hintz. “He accepted the district vision and worked tirelessly to make it a reality. He is not only committed to the process, but is enthusiastic about the impact technology is having on learning across the district.”

“I’m having a blast,” he says. “These have been some of the best times of my career.”

April is Advocacy Month. Learn how you can stand for ed tech and enter a drawing for a chance to win a $100 Amazon gift card.