Learning by Design: The idea that moved a district 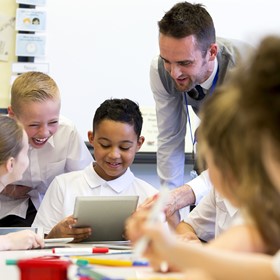 You could say Elisa Carlson became the director of instruction, curriculum and innovation at Surrey Schools in Canada at the worst possible time. But in the long run, it turned out to be just the right moment.

In October 2010, it was clear that classroom technology wasn’t having a profound impact on the 70,000 students and the 5,000 teachers in the system.

“We hadn’t done a good job of educating principals,” Carlson said. “So people would order technology, and it would get dropped off and sometimes used or left in boxes. There wasn’t a context, so we had to change that.”

The district committed to that change, and that’s how Learning by Design came to the British Columbia school.

Learning by Design wasn’t some gimmicky catch phrase. It would become the motto that Carlson and her colleagues, Superintendent Jordan Tinney and Director of Information Management Services Dan Turner, lived by. And it was the idea that transformed the district, earning it the 2015 Sylvia Charp Award for District Innovation (now called the ISTE Distinguished District Award).

Learning by Design (LbD), the district’s new shared vision, introduced three core aspects – structures, tools and learning – as foundational ideas when designing learning for the future. The vision validated the valuable role of technology in student learning and recognized that the tools that support learning extend beyond digital technologies. The approach empowered teachers to design learning conditions that were student-centered, inquiry-focused and steeped in real-world experiences.

The focus is on embracing technologies, innovation and connecting learning to the community, Carlson said. To integrate the overall philosophy districtwide, the district’s technology team created an aligned ecosystem that emphasizes collaboration and engagement with a nod to five key components: leadership, professional practice, schoolhouse, technology toolbox and partnerships.

The district’s refreshed philosophy focused on approaching learning from the student’s view. It would drive student-based projects steeped in real-world experiences.

“The notion is that, as educators, we really are architects of the learning experience for students,” Carlson said. “It’s about uncovering the curriculum with students, and technology gives us the tools to do so in really powerful ways.”

Staff development was crucial for success, so professional learning sessions became mandatory. But instead of being sit-and-get sessions, they were designed to be engaging, involving peer-to-peer collaboration and ample time to try, play, experiment and explore technology.

Carlson’s team did its part by sharing individual classroom achievements and profiling teachers who were doing great work via social media channels. The idea of 24/7 learning via technology was applied to educators as well as students. The district also hosted ed camps to keep the professional learning going, and convened a group of “helping teachers” to boost teacher capacity.

“What happened is teachers got excited about the learning,” Carlson said. “We often forget, there’s a lot of joy in learning for both students and teachers. It really was a full mind shift for the district. It was creation rather than consumption being central to instructional design.”

Having a plan is essential

The district put in place new rules. For instance, schools had to develop a school plan before being eligible for district technology. Those schools with the best plans received grants to kick off their proposals. To give everyone a fighting chance — and to get them fired up — the district hosted a series of dinners featuring keynote speakers and ignite sessions. The events had a waiting list, so leadership live-streamed the program and maintained a Twitter stream during panels.

Carlson expected to review 10 applications for mobile devices; she received more than 60 proposals and funded 15 in the initial pilot.

“Educators understood the shift in using technology,” she said. “It wasn’t about consumption but creation. We brought in educational thought leaders from across North America to challenge our thinking. We gave teachers permission to try on new practices, and they began designing new opportunities for student learning.”

Teachers had their classrooms Skyping with science experts, authors and other classrooms. Some teachers introduced Genius Hours and gave students the tools and guidance to explore their passions. The district changed assessment practices, and had students share their learning using digital portfolios. Libraries became learning commons where teacher librarians linked students to ideas, information and people across the globe. And as they embraced these new literacies, teachers shared their experiences through the Twitter hashtag #sd36learn.

“We moved from a static warehouse of knowledge to a dynamic learning space with 3D printers and makerspaces for designing, thinking, creating and communicating new ideas,” Carlson said.

Instead of sending out traditional report cards three times a year, the district uses progressive assessment practices and tools like FreshGrade to capture evidence of learning on a daily basis. Students and parents can access the data and discuss ways to extend learning.

Teachers also commit to learning alongside their students. And teachers vote with their feet by signing up for workshops they’re interested in. They reflect on their learning in face-to-face sessions, actively use Twitter to share their work and blog about their changing practice.

Educators shared their successes. One teacher’s Genius Hour, for example, grew to several at one school, then expanded to teachers across the district. Eventually, one district high school offered a Genius Hour course.

A big challenge for Carlson

Carlson didn’t have the stereotypical résumé for her new role. She was previously a principal in the district before she was encouraged to apply for her current post. She gave herself low grades when it came to tech knowledge but accepted the responsibility for the K-12 curriculum and staff development.

In fact, Carlson sees her tech limitations as a gift that allowed her to keep the focus on learning. “Our focus with instructional technology is on transforming learning and embracing new literacies. Ultimately, the new literacies are more about thinking than about technology.”

April is Advocacy Month. Learn how you can stand for ed tech and enter a drawing for a chance to win a $100 Amazon gift card.

6 Ways the Pandemic Transformed Schooling — But Will It Last?

After nearly a year and a half of pandemic-related disruption, going back to school this year will look unlike anything we’ve ever seen before. And that’s a good thing — or at least it should be.