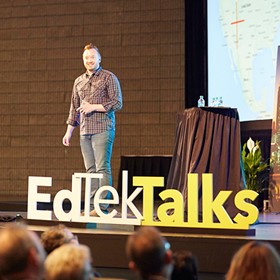 Five innovators will motivate attendees to create new futures for their students, communities

WASHINGTON, D.C. – April 30, 2015 – Five innovators who have pushed the limits of their imaginations to create meaningful change will deliver the EdTekTalks at ISTE 2015 on Monday, June 29 from 2:15-4 p.m. in Philadelphia. These mini-keynotes, a new conference feature added in 2014, will highlight leaders from the worlds of art, science, philanthropy and technology. Opening with a high-energy, interactive multimedia event from student performance group Remix Interactive, the 2015 EdTekTalk session will explore the power of imagination and creativity to turn challenges into opportunities.

“From a philanthropist who realized the power of the pencil to change lives for millions of children to an inventor who is unleashing the potential of aerial photography to transform the way we see the world, this year’s EdTekTalk presenters exemplify the ways creative thinking can and will allow us to transform the future,” said Brian Lewis, ISTE CEO. “Each thought leader will offer a provocative perspective that will inspire us, as individuals and organizations, to push the limits and realize new ways of thinking about learning and teaching.”

The creative thinkers who will deliver the 2015 EdTekTalks are:

Students from Remix Interactive will guide the audience through a fast-paced, seven-minute session with different types of interactive activities. These activities will tap into multiple senses as the audience participates in clapping, singing and using a special application on their mobile devices to play along with the performance.

Attendance at the EdTekTalks is included in ISTE 2015 registration, but seating is limited. Registered attendees are encouraged to sign up in advance at http://isteconference.org/2015/program/edtektalks.php.

About ISTE
The International Society for Technology in Education (ISTE®) is the premier nonprofit organization serving educators and education leaders committed to empowering connected learners in a connected world. ISTE serves more than 100,000 education stakeholders throughout the world.

ISTE’s innovative offerings include the ISTE Conference & Expo– the world’s most comprehensive ed tech event – as well as the widely adopted ISTE Standards for learning, teaching and leading in the digital age. The organization’s robust suite of professional learning resources features online courses, consulting services for schools and districts, books, and peer-reviewed journals and publications. For more information, visit iste.org. Connect with ISTE via Twitter, Facebook and LinkedIn.