Educators: What possibilities can you create? 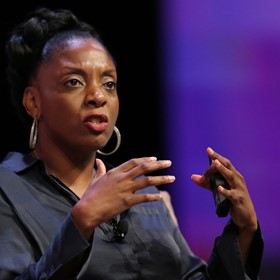 You are amazing. You are creating possibilities. You are liberating children. Because of you, the next generation will be empowered.

As a child, Nadia Lopez could easily have gotten lost in the New York City school system. Instead, the internationally recognized education leader stood onstage at ISTE 2018 and led thousands of educators in a mantra to counteract the cynicism and exhaustion that pervades so many schools.

That cynicism and exhaustion, she believes, is threatening the future of today’s kids.

“Your words have a lot of power,” she says. “Unfortunately, when you come from a community where children are spoken to in a way that they’re not valuable, that they’ve been marginalized, they don’t see education as a priority.”

It almost happened to Lopez. As a student, she avoided trigonometry class every day because she didn’t understand it as it was being taught. After catching up with her in the hall, the teacher called her out in front of her peers and accused her of not caring about her education.

“She proceeded to call my mother by the time I got home and told her, ‘She’ll never make it through college, so there’s no point in saving your money,’ “ Lopez says. “That was an 11th grade teacher who never asked me what was wrong or what was going on in my household.”

Despite attending one of the best high schools in New York City, Lopez didn’t see herself as college material.

“I did not think I was good enough,” she says. “No one ever said that to me. I simply looked at my own race, I looked at my gender, and I self-selected that I was not good enough.”

Fortunately for Lopez, she was surrounded by family and friends who told her otherwise—but not all students are as lucky. As the founding principal of Mott Hall Bridges Academy, Lopez works with teens who often hear more about their limitations than their potential. Nine in 10 receive free and reduced-priced lunch. Just one in three graduate high school. Only 14 percent go on to receive a bachelor’s degree.

“The stats against my scholars are telling them that they’ll never amount to anything,” she says. “The stats from my teachers are saying that you’re in a place where children don’t learn, and where your work will never matter.”

It’s a mindset that can trickle down from person to person and poison the well of learning for everyone—and it’s one that Lopez is committed to changing. That’s why she calls her learners “scholars” instead of students, to cultivate a growth mindset that allows them to see possibilities for themselves. It’s also why she’s determined that every one of her scholars will set foot on Harvard soil.

You got this. We are here to sharpen our iron. We are the possibility for children, the world and ourselves. When no one else tells you, I want to remind you that you matter.