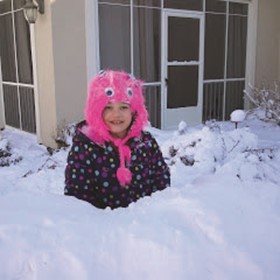 Most fourth graders are expected to spend a fair amount of time practicing their writing, whether it's keeping a class journal, composing book reports or drafting research projects. Yet for many students, writing is met with boredom — or worse, dread. Not for Meridan Boyd, a 9-year-old who pens Meridan's Little Voice blog.

Meridan, a student at Van Meter Community School in Iowa, learned about blogging from her school librarian, Shannon McClintock Miller, who is a prolific blogger herself. Meridan had seen her blog and wanted to know more about it."It looked interesting and fun to do," Meridan said. "I like to learn. It's neat to know things that others don't or join in with people who do." Meridan embraced blogging and joined a group of students that includes McClintock Miller's son, Hagan, in a weekly after-school blogging group.

Meridan loves to share her passion for technology and connect with others around the world, such as a class of students in the United Kingdom. She updates her readers about life in Iowa — including weather and animals — happenings at her school and tech tools she's exploring. "It's a creative way to express myself and share information," she says. She also writes about her triumphs — like teaching her mom to use technology. In a post titled " Everyone Can Learn New Technology — Even My Mom," she writes, "My mom isn't very technically savvy, but she's getting better and at least she tries."

Meridan's mom, Lisa Boyd, says she uses mainstream tools but isn't as adept as her daughter with apps and other software. But Meridan is changing that, and Boyd credits McClintock Miller.

"As a parent you have a perception that a teacher may think that they are only teaching their students, but when it comes to technology, their reach is so wide and vast," she says.Aside from allowing Meridan to explore technology and reach out to others, her blogging has also helped Meridan hone the craft of writing.

A story she wrote about a cat who solves mysteries earned her a Dallas County Reading Council Creative Writing Award and the chance to present her story at the Young Author's Reception in April.

She was also a finalist in a national writing contest sponsored by Mrs. P, a website that exposes children to great books and stories through celebrity storytellers. Meridan says the best part about entering that contest was that Mrs. P left a comment on her blog:

Congratulations on your local win and I'll be cheering for you to win your state competition! Way to go, Meridan. — Your friend, Mrs. P

"It really surprised me to get a comment from her," Meridan says. "It was nice of her to take the time to do that. She's a great lady and really funny too! "Meridan, along with Hagan and others, has even presented about technology to groups of adults. "I can count on Meridan to be helpful not just to parents, but to other students as well," McClintock Miller said. "We have helped and inspired others outside of the walls of Van Meter too."

This is an updated version of an article that originally appeared in the June/July 2013 issue of Learning & Leading with Technology.

Common Core: It's not what they know — it's how they'll use it

The Common Core is more than just the latest set of standards to follow. It represents a major shift in the way we teach and the way students learn.

It's no longer enough to work from a pre-determined set of knowledge and skills all students are expected to acquire. To truly…

For teacher educator Nicol Howard, addressing digital equity issues starts long before K-12 students ever get close to a classroom.

One of the key starting places is the training those students’ teachers receive in their degree programs. But it’s not as simple as teaching new educators…