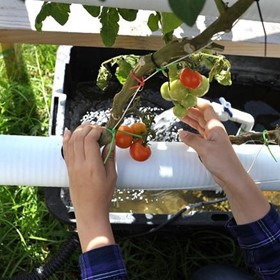 About 90 percent of Hawaii's food is imported, according to state estimates. If a natural disaster or global event disrupted the planes and ships that deliver goods to Hawaii, its people would have only enough food to live for 10 days, said Mitsuyasu, a sophomore at Mid-Pacific Institute, a PK-12 college prep school in Manoa Valley, near Honolulu.

" "The main factor of why we have such bad food security is because we have such little space with so many people!" " Mitsuyasu said.

So last year Mitsuyasu and four of her freshmen classmates set out to find ways to make Hawaii less dependent on the outside world for its food. They won first place in the MPX Hydroponic Gardening Competition at their school. MPX — Mid-Pacific Institutes Exploratory Program — is a project-based learning program that integrates English, history and STEM into the curriculum.

The students researched hydroponics — the process of growing plants without soil by using sand, gravel or liquid with added nutrients. They designed and built a hydroponic structure and then planted vegetables.

When their crop was ready, the students used their harvest to prepare a meal. The menu, which could rival any top restaurant, featured Mediterranean quinoa salad with tomatoes, bell peppers and cilantro garnished with feta cheese, as well as a spicy citrus-herb marinated chicken on a bed of arugula and red sails salad, drizzled with a chili-lime dressing.

The MPX program uses a project-based learning approach, which allows students to take charge of their own learning. There are no textbooks and no tests. Students learn from doing.

" "In the traditional classroom, you would walk in, sit down and listen to a teacher give a lecture or presentation about the topic while you take notes. Then at the end you would have a test to prove you learned all the necessary requirements," " Mitsuyasu said.

" "In the MPX program, we are given a topic to research, and we conduct the research ourselves. The teacher would give us the source of information — website, picture or video — and then it would be up to us to take good notes to produce a final product." "

For the hydroponic project, teachers guided students through the process of building a hydroponic system, growing food and cooking. Students used iPads to research the essential nutrients plants require and to design their structure, Mitsuyasu said.

The students also learned things like problem solving, collaboration, cooking, time management and responsibility, she said. And they discovered that expectations and reality often are two very different things.

" "We had a set idea of what was supposed to happen, and we planned everything out accordingly, but not everything went the way we thought it would go," " Mitsuyasu said.

Back to the drawing board

For instance, they had calculated the measurements and materials they needed to build their hydroponic system, but halfway through the construction process, they discovered that the framework wasn't sturdy enough to support the weight of the water used in hydroponics.

" "So we had to be quick problem solvers," " she said. By adding an extra piece of wood to the back of the frame in an angled position, their structure became strong enough to support the weight of the water.

The all-girl team worked closely together and fulfilled specific roles. Mitsuyasu served as group leader and contractor. Mahina Smith was the architect, grower and builder; Kendall Murphy was the culinary expert; Cami Kai was the plant expert, grower and builder; and Bailey Lum was the documentarian.

" "Though we all had assigned jobs and we introduced ourselves by our job titles, we all knew each other's job and helped each other out," " Mitsuyasu said. " "For example, when building, we didn't let two people put the system together themselves — we all pitched in and helped to build it." "

Teacher Gregg Kaneko said Mitsuyasu's group was extremely successful. " "They were very hard workers and dedicated to producing high-quality work," " he said. " "It was funny because I purposely assign very little homework, but this group spent countless hours outside of class working on their project. Their attention to detail is awesome." "

That's not to say there weren't rough patches, Kaneko said. They actually got off to a rough start because the girls weren't working well together.

" "I always tell students in leadership positions that there's a fine line between being bossy and being a good leader," " he said. " "Kailee was on the far end of bossy and really struggled with learning how to be a good leader. She felt she had to prove herself to her group and was pretty overbearing." "

But by midyear, the girls were collaborating well. Much of that had to do with Mitsuyasu's " "profound transformation," " Kaneko said. She was able to step back and absorb feedback from teachers and peers and change her leadership style, he said.

" "She realized that she shouldn't have to prove herself to anyone but herself," " he said. " "She worked hard and today she is a very different, much more mature student." "

Mitsuyasu said she's interested in becoming an architect and engineer based on the problem-solving she practiced during the hydroponic project.

" "I loved the creativity I was given when designing the hydroponic system," " she said.

Mitsuyasu will be one of four students sharing her story during the ISTE webinar Global STEMprenuers on Wednesday, Oct. 22.

Tim Christie is a freelance writer from Eugene, Oregon.

A black male educator himself, he’s no stranger to the diversity problems that still…

Student activists at Florida’s Marjorie Stoneman Douglas High, who attracted global attention by demanding better gun laws after 17 of their classmates were killed inspired some Eugene, Oregon, students to take on a civic engagement project of their own.