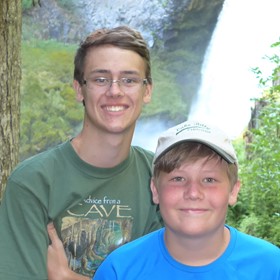 It’s no secret that Minecraft taps into students’ passions. What better way to learn than by playing your favorite game?

But Minecraft doesn’t just fuel their passion for video games. Its design-oriented gameplay allows kids to explore a wide variety of interests within the game environment — and young animators, engineers and even musicians are getting creative about translating their outside passions into the game realm.

Take Christian and Samuel Bosch, two young Minecraft players with very different interests. Christian is an innate designer and engineer who builds working vending machines and pinball machines out of LEGOs — his creations wowed the instructor at his LEGO Mindstorm camp last year. Samuel enjoys music and is learning how to play the piano. Both have discovered innovative ways to express their creativity through Minecraft.

As enthusiasts of the game, they’re advocating for its broader use as a learning tool. To show educators the wide range of creative possibilities Minecraft offers, the brothers will present a poster session at ISTE 2017, “Using Minecraft to Foster Innovative Learning.” They also have a YouTube channel where they share tutorials they've created.

“Minecraft doesn’t have to be just a game,” says Samuel, a sophomore at South Eugene High School in Eugene, Oregon. “It can be used as an alternative method of teaching stuff that’s hard for some students to conceptualize or visualize.”

When he started playing around with the game’s musical capabilities, he decided to see if he could recreate some of his piano songs in Minecraft using note blocks and delay switches. It took a lot of trial and error, but he was able to build in-game devices that can play “The First Noel” and “Little Drummer Boy.” The experience made him realize just how powerful a learning catalyst the game can be.

“If I were to use this in the classroom, I would be teaching music theory, timing and different scales of notes and allowing kids to compose music in Minecraft to demonstrate their understanding of the subject,” he says.

Christian, a sixth grader at Roosevelt Middle School, is a Minecraft power user; he’s been playing since he was 7. Lately, he’s been using the game to develop his design skills into a budding passion for animation. With a program called Mine-imator, he’s able to easily design and build characters, then bring them to life.

“Your creativity can go wild,” he says. “I was always interested in seeing the animations Pixar makes, and I wanted to make my own. I tried to do stop motion with LEGOs, but then I found I can use Mine-imator to make animations from my favorite game.”

Kids get creatively fired up when they’re able to forge connections between their varied interests — especially when they can do so while playing a video game they love. Plus, the creative work students like Samuel and Christian are doing helps them meet many of the ISTE Standards for Students, including:

Creative communicator. During trips to the beach, Christian noticed all of the tsunami warnings and became concerned about the threat of natural disaster. He expressed his fear through Minecraft play by creating an in-game tidal wave — and a boat on which he could safely ride its crest. Visualizing himself overcoming the threat helped him process his feelings, says mom Sherry Bosch, online learning manager for ISTE.

Computational thinker. Playing songs in Minecraft requires not only a strong grasp of music theory, but also the ability to translate them into a format the game can understand, Samuel says. “Note blocks can’t naturally play a song, so you have to creatively think about how to build a timing system and get all the notes correct.”

Innovative designer. For Christian, Minecraft offers endless opportunities to design and engineer new creations — from elaborate architecture to working machinery. “You can build whatever comes to mind,” he says.

At their poster session, the boys will demonstrate some of their creations and present tutorials for replicating their work in the classroom.

“I’m hoping educators will walk away inspired by student examples of innovation and creativity that can be replicated to allow students to express what they know,” says Sherry Bosch, who will co-present the poster session along with her sons and educator Andrea Tolley of Greeneville Middle School in Tennessee.

Or, as Christian put it, “I think Minecraft is going to get everybody excited to learn because it’s a freaking video game!”

Many students love music and dance, and research indicates that learning through music and structured movement is good educational practice. Whether you teach coding or another discipline, you can use your students'…