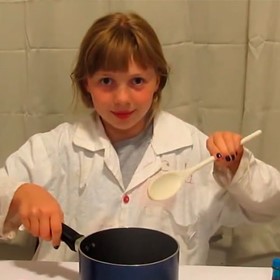 From a cardboard periscope to robots programmed to paint, seventh grader Sylvia Todd likes to make things. And she wants to inspire other kids — particularly girls who sometimes shy away from STEM careers — to get passionate about science, technology, engineering and math.

Her vehicle for spreading that inspiration is her website, Sylvia's Super-Awesome Maker Show . This is where you can find videos of Sylvia demonstrating how to make everything from crafty decoupage pieces to advanced science projects from premade kits.

Sylvia first started making things at age 8 after attending a local maker faire, an event that promotes the do-it-yourself mindset in arts, crafts, engineering and science projects. Sylvia was so entranced by the event that her father, James, suggested she make something and share it on YouTube as a summer project.

In an improvised studio, Sylvia donned a white lab coat and demonstrated how to construct a Drawdio, a kit that transforms a pencil into a musical instrument. Her dad, who is also a tinkerer as well as a web designer, videorecorded her and uploaded the video onto the internet. And Sylvia's Super-Awesome Maker Show was born!

That first video garnered over 63,000 views. A dozen and a half episodes later, her website is still drawing new subscribers numbering in the thousands.

With production now down to a science, Sylvia and her dad usually complete an entire project over a weekend during the school year. The episodes are simple, informative and, most of all, fun. And the projects are open source, so viewers can re-create them at home.

Incorporating puppetry and themed music, Sylvia often demonstrates how to make things from premade kits, such as Arduinos, single-board microcontrollers used in the construction of robots and LED lights.

"I want to make sure that kids are aware of that sort of stuff so if they want to learn more about it or how to do something with it, they have the opportunities to do it," Sylvia said.

The past year has been busy for Sylvia. After winning a silver medal at the 2013 Robogames , an international robotics competition, she was invited to demonstrate her winning WaterColorBot to President Obama at the third annual science fair at the White House. She has given a TED talk and made a guest appearance on Katie Couric's talk show.

Although she's only 12, she has big plans for her future. She wants to someday attend MIT and study aerospace engineering. "I love stars," she said. "I've always wanted to be some sort of aerospace engineer, and if that doesn't happen, I still have some other interests. I like drawing. I like writing. There's just tons of other things that I like, but I could change my mind."

For now, Sylvia says she is content making things and sharing with other kids, as well as being an advocate for the kind of hands-on learning that the maker movement promotes. "Mostly school is just lectures and lectures with books and homework," Sylvia said. "But what I want to happen is that schools will start having more do-it-yourself projects and hands-on experiences that let you learn a lot more because it is actually fun."

This article first appeared in the December/January 2013-14 issue of Learning & Leading with Technology.