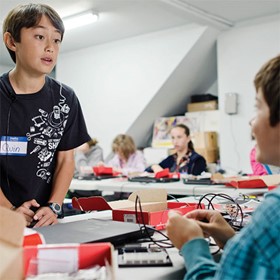 Last year when we talked to 13-year-old Quin Etnyre, the budding young inventor and entrepreneur was immersed in plug-and-play electronic circuits. When he wasn't tinkering with the ArduSensors he had invented, he was teaching college classes at MIT, speaking at Maker Faires around the nation — including one at the White House — and launching his own company, Qtechknow.

Since then, Quin, now 14, hasn't slowed down a bit. He recently launched a Kickstarter campaign to get his Qduino Mini development boards off the ground. The open source, Arduino-compatible Qduino Mini board combines an Arduino, a battery charger and a battery fuel gauge monitor into a compact, all-in-one board.

" "It's an Arduino-compatible development board that's perfectly fit for embedding in projects," " says Quin. " "It's small, has a LiPo battery monitor and charger, so it can remind you when it needs a little juice, and you can charge it while it's inside of your projects!" "

Money from the Kickstarter campaign, which runs through March 26, will support launch of the Qduino Mini and allow his company to order parts in bulk, fund marketing, prepare the prototype for production, finance safety testing for the charger circuit and battery monitor, and advance online tutorials. He reached his $12,500 goal in less than a week and will use the rest to sustain the project. Nearly 500 backers had signed on as of March 3.

To learn more about Quin, his company and his Kickstarter campaign , watch the video below: