Two Iowa students want to shape the future of school 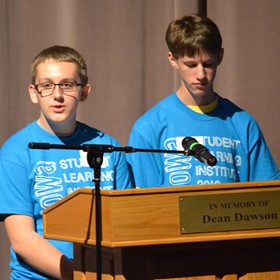 For a couple of high school students, Jack Hostager and Ian Coon have some pretty big ideas about the education system.

They're the founders of the Iowa Student Learning Institute (ISLI), whose mission is to " "revolutionize Iowa's approach to education through the power of the student voice." "

Hostager and Coon, both 17, organized the first ISLI conference in October 2013, and it was such a success they decided to make it an annual event. The second ISLI conference is set for Nov. 8, when over 200 attendees are scheduled to show up.

The vision of the conference is to overcome the " "passion gap," " Hostager said. " "You can't learn anything unless you want to learn or you're passionate. It's about putting trust in students to take ownership of their education." "

Hostager and Coon met virtually in February 2013 during an edcamp Iowa conference. When they discovered they were the only two students participating, they knew they had to do something to get more young people involved in education.

" "We came to two conclusions," " Hostager said. " "That, by and large, students are not invited to be involved in the process of shaping the future of school. And that most students do not see themselves as having the responsibility to take a stand on issues they care about and effect positive change in their schools and larger communities." "

They connected on Twitter, where their friendship — and their shared interest in education reform — grew. But they didn't actually meet face to face until last year's ISLI conference.

Developing a passion for ed reform

Coon, a junior at Waukee High School in Des Moines, said he's wanted to be an educator since he was in elementary school. His desire to change the education model emerged when he entered middle school and encountered a more structured approach to education.

He decided to create a blog to share his thoughts on education with the world. That's how he connected with a teacher who encouraged him to attend edcamp Iowa.

That was the moment " "where I went from thinking about the policy part of it to the passion part of how we do education," " Hostager said. " "It got me excited about the idea of changing the system." "

Planting the seeds of change

After connecting at edcamp, Coon and Hostager hatched a plan to get students more involved in education issues. Supported by a cadre of adult mentors who now serve as board members, they decided to plan a conference modeled after edcamp Iowa — except that it's focused on students.

" "What I found remarkable," " said Michelle Hill, an ISLI board member, " "besides the fact that a freshman and a sophomore in high school were going above and beyond to improve education and encouraging others to do so, was Jack and Ian actually planned the entire conference remotely through shared documentation, video conferencing and social media." "

They reached out to high school principals in Iowa, who helped them find students with an interest in changing the way school works.

The conference began with inspiring speeches followed by students breaking into smaller groups to talk about specific issues. This year's event will follow a similar format, though there will be separate sessions for teachers and students.

" "Ultimately," " Hostager said, " "we want adult attendees to leave with a greater appreciation for the power of student voice, and we want students to leave knowing that they have an important role in shaping the future of their education and changing the world beyond.

" "Students don't think about education in terms of how we can change it," " he said. " "This is about changing it — what do you want to see? It was a different experience for a lot of students there. They were excited about the thought of that." "

Or, as Coon put it, getting students to change their thinking from " "surviving school to thriving in school." "

" "A lot of it goes back to trusting students," " Hostager said.

Hill, an educator in Waukee, said she's already seen a shift in culture in the Waukee School District as a result of Coon's and Hostager's efforts — specifically in assuring that student voices are heard in the classroom, from kindergarten all the way up to district administration.

" "Our educators and administrators really want to know what students think about how we can improve and develop a real partnership in learning," " she said. " "I certainly think some of that change is in part due to Ian and Jack's initiative." "

That change in culture, that acknowledgment that students' voices must be heard, is key to improving education, she said.

" "If we as educators ignore their interests, passions and concerns, how will we ever be able to help them achieve growth?" " she asked.

That's something educators have long known, she said, but what's different about the ISLI movement is that it gives students the encouragement, and more important, a platform for students to share what is really on their mind.

" "They are encouraged to go back to their home schools and begin to make those small changes that eventually lead to full-scale culture shifts," " she said.

At last year's conference, the " "Students of Iowa" " adopted a proclamation that reads like a manifesto. Among its many demands, the document avowed:

We demand that the adults leading our schools, communities, and local and state governments put students at the forefront of all educational decisions rather than politics, money, or the ridiculous ideas of those without a vested interest in Iowa and your children.

We demand students be included as equal stakeholders at all levels of the decision-making process.

Also among their demands:

It's a tall order. But another board member, Shannon McClintock Miller, is impressed with what Coon and Hostager have accomplished already.

" "They took their passion and not only inspired all of us as teachers, but inspired hundreds of students in Iowa and around the world," " she said. " "I just know that Jack and Ian will continue to do amazing things that incorporate their passions with teaching, learning and student voice." "

As educators pursue more personalized, student-driven and inquiry-based approaches to learning, one obstacle that continues to rear its head is the inability of widely used assessment models to successfully measure student learning and growth.

My biggest goal as a teacher is to make every one of my students know how important they are and how invested I am in their learning and well-being. I want students to enjoy learning and to walk out of my classroom with a new level of confidence.