What if every kid could learn through tinkering? 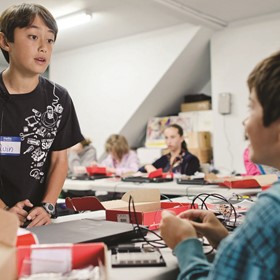 Quin Etnyre has been a featured speaker at Maker Faires in the United States and abroad, invented a product, founded his own company and taught introductory electronics classes to alumni of MIT — a school he one day plans to attend when he finishes middle school and graduates from high school.

The 13-year-old first became interested in electronics after attending a Maker Faire, an exposition based on the DIY maker movement  that promotes hands-on learning.

Shortly after that, Quin started making things with Arduino, an open-source electronics prototyping platform based on flexible, easy-to-use hardware and software. He tinkered around with the platform and invented ArduSensors, plug-and-play components for making electronic devices. He launched his own company, Qtechknow, in 2012, and sells ArduSensor kits through sparkfun.com.

Quin is perhaps most passionate about teaching others about electronics and promoting hands-on learning as an education model. That's what prompted him to approach officials at his school district last year. Arguing that typing was the only "technical" class offered at his school, Quin and his father pitched the idea of teachers using electronics kits in their classes. They were so impressed by his presentation that the district now plans to have a DIY electronics program up and running by the time Quin enters high school as a freshman in September.

Eventually Quin would like to start his own STEM school based on the Montessori model. According to his plan, elementary, middle and high schools would be situated on the same campus so that older students would be available to mentor the younger ones. "It would focus on kids just building things themselves in groups," he said. "The teachers would occasionally have a lesson, but the kids should learn on their own a little bit too."

Although technology would be the school's primary focus, Quin has ideas about how teachers could also incorporate other curriculum areas.

"I think they could teach most everything, but blend it with technology — like for language, maybe build an application," Quin said. "For some of the science or the leadership classes, they might find problems in their community and use technology to solve those. And for social studies, you could definitely research and go on Google Maps and look around and view visually from really far away, but you could still see about 360 degrees around you so it kind of feels like you're in that place."

Between homework and sports — Quin loves volleyball, swimming, cross country and track—maintaining a healthy balance is a bit of a challenge, according to his dad.

"He is constantly coming up with new ideas," Ethan Etnyre said. "He has multiple projects going at the same time. I'm not sure how he keeps them straight, but he does."

And despite his hectic schedule, Quin also finds time to do kid things like hang out with family and friends. Of course, he's already planning his project for next year's Maker Faire: robots controlled by text messaging.

This article first appeared in the March/April 2014 issue of Learning & Leading with Technology.

Want to learn more about incorporating STEM skills into your school? Check out ISTE's STEM webinars.