4 ways to use Scratch to bring coding to young learners 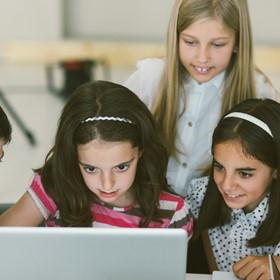 If you want to incorporate coding into the curriculum but your school lacks the resources, there are plenty of low- and no-cost tools you can turn to. Scratch is one of the most versatile resources for this because it boosts student engagement and provides an easy way to infuse coding into your existing curriculum.

If you’re ready to give it a shot, here are four ways students benefit from Scratch in the classroom:

Learn programming. Creating games is fun, and using Scratch makes this activity accessible even to the youngest learners because compared to other programming languages, Scratch is intuitive and easy to learn. This engaging activity engages students and motivates them to learn.

Many younger students shy away from programming because the syntax is confusing and frustrating. Scratch’s drag-and-drop block structure gets rid of the syntax problems while reinforcing the logic and intuition behind programming. Understanding how Scratch works also makes it easier to learn new computer programming languages.

In fact, I’ve found that after using Scratch, students will ask to use their new-found knowledge to create learning opportunities for their core academic classes. For example, two students I know created an interactive flipbook on sound. Rather than completing the traditional children’s sound book for eighth grade science, the students asked if they could put their computer programming skills to work and create an animation instead.

Another student created a project for social studies that not only involved learning about the Mayan ballgame, but also gave users the opportunity to play the game.

The usual methods of presentation, like slideshows and poster boards, are static and one-way. When students present complex material using text or diagrams, viewers can become confused because they are simply viewing the work and not interacting with it.

But when students create moving diagrams it’s easier to demonstrate complex relationships and show their grasp of the subject. Interactivity also improves comprehension for the viewer.

When students decide which tool to use they are addressing one of the key components of ISTE Standards for Students. The Empowered Learner standard expects students to leverage technology to take an active role in choosing, achieving and demonstrating competency in their learning goals.

Understand math applications. Scratch allows students to see the real-world application of math. No matter the concept, when students ask, “Why are we learning this? How will it help us?” Chances are, you can show them a relevant programming application. For example, after learning about four-quadrant graphing, my students were able to program the arrow keys in Scratch to simulate video-game-like movement of characters.

Boost critical thinking. With Scratch, there are multiple ways for students to complete the same task, such as making characters move. Students get to decide the method that works best for them.

They also build thinking skills – and perseverance – when they make mistakes and their program does not work. In the words of a fifth grade student, “When you become really invested with something that you have programmed, it just makes you want to go through all of the scripts over and over until every little bug has been worked out of the system. And when you finally get a program that works exactly like you want it to, the feeling is so great that it makes you want to make another one.”

As you can see, being exposed to computer programming and computational thinking skills can have a significant impact on student learning. Our task now is to find ways to expose and implement more opportunities for educators to infuse these skills into their curricular repertoire.

Watch the video below to learn how and why to introduce coding to the youngest learners:

Heidi Williams is a 21st century STRETCh (Striving To Reach Every Talented Child instructor). She spent 14 years as a middle school math and science teacher and has served as a differentiation specialist, K-12 instructional coach, K-5 principal, K-8 curriculum director and K-12 gifted and talented coordinator. She is currently the computer science curriculum specialist at Marquette University in Milwaukee, Wisconsin.

This is an updated version of a post that originally published on May 2, 2017.

When embarking on your school or district’s computer science (CS) journey, computa­tional thinking (CT) should be taught first, primarily because CT helps learners under­stand the logic and algorithmic processes that are the foundation of both hardware and software designs.

When learning new knowledge, it is critical for students to connect new concepts with previous learning and experiences and then be able to transfer it in multiple and creative ways. It is, therefore, essential for teachers to structure learning using what has been discovered in the…