Introduce your students to 3D printing 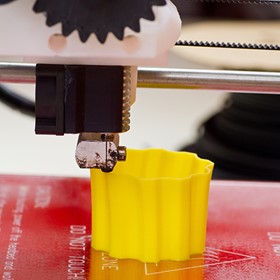 When I first heard about 3D printing, my reaction was: " "You mean it will print a 3D picture on paper?" " It was a mind-boggling concept at first, and little did I know at the time that this " "printer" " would do a lot more than print a multidimensional image on a piece of paper. It actually manufactures objects, and it is already revolutionizing numerous sectors, from plastics to health care. More important, it gives students an entryway to understanding STEM concepts, because it allows them to bring their ideas to fruition.

When my school first got a 3D printer — an unassuming Makerbot Replicator 2 with a digitizer — I knew I wanted my students to have a meaningful experience with this 3D world of making. I thought long and hard about how best to connect the world of 3D design to curriculum in relevant ways. And I came up with a step-by-step process that has been effective:

Step 1: Introduce the concept.
I introduced 3D printing in the context of the history of science and technological development by sharing this passage from Joy Hakim's Story of Science:

In Italy, the Polish student Nicolaus Copernicus learns of Columbus's voyage and of others that follow. He studies some of the new maps. He also studies an astonishing new drawing technique called perspective; it uses principles of geometry to show three dimensions on a two-dimensional piece of paper. Drawings no longer have to look flat; they can show depth. They can mirror the real world. ... Art is soon used as a tool of investigation — to plot, to plan and visualize.

To introduce students to the process of going from idea to design to printing, I showed them a video that described how 3D printing works. The printer allows users to manufacture an object using a digital modeling program or by downloading a design from Makerbot's Thingaverse site.

Next, I showed students three videos from Makerbot's site about explorers who have used 3D printing to invent, create, refine and benefit humanity. Technology enabled many of these inventors to collaborate across continents. In the case of Spuni, they set out to improve the design of baby spoons. With Zboard, 3D printing helped entrepreneurs make their products by facilitating the iterative process of design.

Perhaps the story that my students found most inspirational was the one about Robohand Project, which told the tale of a man in South Africa who, after losing his right fingers, was determined to print a 3D replacement. Through successful collaboration with a contact in Washington, D.C., he not only printed mechanical fingers for himself, but also for others who had lost fingers. Inspired by this video, one of my students came to me after class and asked how much a Makerbot costs because she wanted to print prosthetic legs for a family friend who lost limbs in a war.

Seeing these videos inspired my students to create their own projects. Before they could print, however, I had them draw and label a diagram of the printer. Next, they wrote out the series of steps necessary to produce an object, beginning with creating a digital design of an object using Tinkercad, a design tool that runs in a browser.

Step 3: Make meaningful connections to the curriculum.
To make this project relevant, we had to connect it to what we were learning. Our project-based learning unit provided the perfect subject matter. The driving question for this unit was: What makes businesses successful and innovative? To answer this question we explored the entrepreneurial cycle, innovation and technology integration, including topics such as building websites and creating commercials using persuasive language.

Students designed a logo, created a company identity, " "applied" " for jobs within the company and worked in teams to complete a business plan. The culmination of this was creating and designing new products and protoyping them using the 3D printer.

Step 4: Explore the importance of iteration.
One group of students — who called their company Untangled — created a gadget to untie double-knotted shoelaces and marketed it under the tagline " "Untie your life." " They used Tinkercad to design their untying tool, created a prototype on the 3D printer and then embarked on the crucial step of testing their design.

The first version turned out to be too flimsy, so they redesigned it to be thicker, using the " "scale" " function on Makerware, the design software that runs with the Makerbot printer.
After making adjustments, they reprinted it. This time, we video-recorded a student using the tool to untie her double-knotted laces. Deciding that the device took too long to untie the laces, they went back to Tinkercad to redesign it again — this time adding an ergonomic handle. The redesign improved the aesthetics and reduced the amount of time required to complete the task. This is what I call true iteration in action.

Meeting the ISTE Standards
3D printing unleashed creativity in our classroom like never before. Students not only imagined their innovations and solutions, but had a tangible way to bring them to fruition.  They learned how to design prototypes using Tinkercad and visualize objects in 3D. When they printed their projects and tried out their prototypes, they quickly discovered that design is an iterative process involving testing and redesign. Embedded in this process of problem solving are skills that address several of the ISTE Standards for Students, including Communication and Collaboration; Creativity and Innovation; Critical Thinking, Problem Solving and Decision Making; and Technology Operations and Concepts.

I have no doubt that many of my students will take what they've learned and apply it throughout their lives. In the words of one my students, " "Makerbot is the door to creativity." "

Janice Mak is an instructional coach and teacher in the Paradise Valley Unified School District. She helps her students learn through an interdisciplinary and " "learning by doing" " mindset. Read her blog and follow her on Twitter @jmakaz.