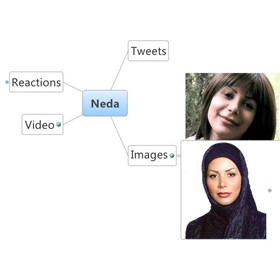 During a recent adventure to the attic, I found a box of old newspapers and magazines from touchstone moments of the past — the cover of Time magazine when Nixon resigned, the Los Angeles Times headlines announcing the Challenger explosion and many more. As someone who is fascinated by history, I continue to collect records of historic moments but find myself exploring new methods as media have evolved.

In 2009, the elections in Iran marked a change for me. The world was captivated by news reports about what appeared to be a stolen election. All of the major networks carried early reports of events in Iran with reporters sharing stories and images from the field. However, the Iranian government quickly sequestered all networks, and the only reports coming out of the country were those floating on the wings of social media, such as Twitter, Facebook, YouTube and various blogs. The people of Iran — not the journalists — became the eyes of the world.

The story was as much about the medium through which the story flowed as it was about the people's struggle. I followed multiple Twitter feeds and hashtags, starting with #Iran, then #IranElection. As time went by, a new tag appeared, #gr88, and finally #Neda for the name of the young lady the world watched die on a street in Tehran. Early on, I captured images of interesting tweets and saved all of the associated links. This form of electronic paper clipping took me to multiple sources, stories and media environments as the story spread across the web.

Eventually, it became clear that I had a large collection of content from the social web that was crying out to be arranged in a way that I could share with the world. Organizing the content chronologically by theme, I used XMind, a mind-mapping tool, to arrange each tweet, blog post, Facebook page, photo and video. It became clear to me that this method of capturing news content from the social web and arranging it with mind-mapping tools was a powerful way for any teacher or student to retell stories from around the globe and illustrate their understanding of events.

Teach a new way of storytelling

Exploring issues as they happen is a powerful way for students to delve into history, science, social studies, journalism and more. This exercise promotes higher-order thinking and addresses many of the ISTE Standards for Students, including Research and Information Fluency, Communication and Collaboration, Creativity and Innovation, and Digital Citizenship. Here's how you can get your students started.

Set up a Twitter account. Twitter is the starting point for this type of work, as it is an efficient way for millions of people to share stories quickly by providing links to sites with additional content. After students create their Twitter accounts, have them set up an account with a feed-reading tool, such as TweetDeck or HootSuite. Feed readers allow you to monitor several hashtags simultaneously.

Find the best hashtags. When an event unfolds, show your students how to set up search feeds using obvious hashtags. For example, when a large earthquake struck Chile, I started with #earthquake. As the tweets started coming in, I looked for other hashtags people were using and figured out which ones were getting the most mileage. Constantly refine your hashtag search criteria as the relevant tags will often change over time. Most feed searches support Boolean strings, such as AND, OR and NOT.

Don't limit yourself to tags only in English. When I searched for #earthquake to learn what was happening in Chile, I found relevant tweets, but most were from English speakers not connected to the region. When I searched for #terremoto, I found content in Spanish from Chile as well as surrounding areas of South America. Google Translate allowed me to get a good picture of the content and stories shared by people more closely connected to this event. In addition, the ability to follow tweets in Arabic allowed me to monitor the story of the Arab Spring in ways not available through traditional media outlets.

Save what you find. Have students use screen-capture software to gather tweets along with blog sites and additional content. Snagit and Jing are two examples, but there are many free and low-cost tools available. Additionally, they can use the Print Screen button in Windows or press Command+Shift+3 on a Mac to capture a screen. Have them save each image and place it in a folder along with web links associated with each tweet so they can incorporate them in their final presentations. Let them know that if a tweet takes them to a collection of photos or a video, they can bookmark the website and capture a couple of the images in case the site " "goes dark." " I use the bookmarking site Diigo, but many social bookmarking tools are out there for you and your students to explore.

Document your impressions. Ask them to keep simple notes about the type of content they have captured and their personal reflections of the event as they follow it from afar. This is important because, as stories unfold rapidly, it's easy to get caught up in the excitement. You might think you'll remember everything that's going through your head, but you probably won't unless you jot down notes. Whether your students use desktops, laptops or mobile devices, they can use a note-taking app like Evernote to save and access notes, photos, recordings and documents across devices.

Assemble your story. Students can use any presentation software, but I like mind-mapping tools because they maintain the digital thread of the content: A tweet leads to a blog that has a video and a photo gallery. While I assembled my first story chronologically by theme, there are really no hard-and-fast rules. Allow your student storytellers the creative freedom to choose the structure of their stories. As they assemble their accounts, remind them to refer back to their notes to review their ideas and reflections in order to formulate a narrative that works for them. When finished, have them share their stories with their class, the school and the world.

Many educators consider Twitter a powerful tool for professional development because it allows them to build personal learning networks. However, by hacking the purpose of Twitter, educators can harness the power of this tool to let students capture human stories as they play out across social media and share their understanding with audiences across the globe. What kind of stories can you and your students capture and share with the world?

What do educators love to read about? Judging from the most popular posts that appeared on the ISTE Blog in 2018, they are looking for ideas and strategies for…

I often see discussions in ISTE Connect, home of our online communities, asking for advice about a tool that does this or software that does that. “I need a typing app that works with fourth graders on an iPad.” “Our school is looking for a new LMS.” “I’ve tried this assessment software, but it…