Most education programs get little or no funding increases 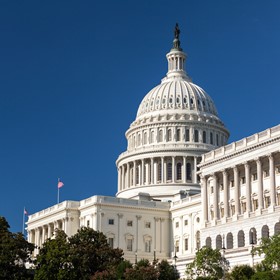 The Senate has approved a fiscal year 2015 appropriations omnibus bill that funds all federal programs through the end of the fiscal year, except for the Department of Homeland Security. The House has already approved this bill, and the president is expected to sign it soon. The bill provides miniscule increases to major education programs — barely enough to keep up with inflation — and flat funds for most others. In total, the U.S. Department of Education would be funded at approximately $70.5 billion, which is a $133 million decrease from the previous fiscal year.

While most of the bigger programs, like Title I and IDEA, saw slight increases or were level funded (Title IIA), the bill cut several smaller K-12 programs and eliminated others altogether. Many of the programs that sustained major funding hits are programs that are meant to help underserved students and communities, including rural, low-income and tribal communities. Technology received no direct funding, as has been the case for the past several years.

One surprising casualty of limited funding this year was support for rural schools. The Secure Rural Schools program, which had received $300 million in past years, was eliminated. The program, although not permanently authorized, provided crucial funds to nearly 4,400 schools on federal Forest Service lands that have a difficult time recruiting and retaining high-quality teachers. These schools will face steep cuts and have expressed concern that they will have to lay off many teachers due to lack of funding. The other major rural program, the Rural Education Program (REAP), was level funded at $169.8 million.

Early learning childhood programs fared pretty well in the final bill. Head Start was level funded at $8.598 billion, and the Child Care and Development Block Grant (in HHS) was increased from $2.358 billion to $2.435 billion. Preschool grants under IDEA were level funded at $353.2 million. Race to the Top, though losing all funding under its line item, still emerged with $250 million (the same level as last year) to support competitive grants focused on preschool and early childhood learning programs. This money will be redirected through the Fund to Improve Education, the amorphous funding pot that in years past was used to fund earmarks.

Technology and innovation programs did not fare well at all. Enhancing Education Through Technology (EETT), a program that hasn't been funded since 2010, received zero dollars again. The Investing in Innovation (i3) program, the competitive grant program created through the 2009 stimulus legislation, was cut by $26.1 million. The First in the World Competitive Grant program, which is in its first year of implementation and is meant to provide funding for innovative strategies that improve student outcomes, also took a $15 million hit, bringing it to $60 million in fiscal year 2015. Lastly, the State Longitudinal Data Systems (SLDS) program, which helps propel the successful design, development, implementation and expansion of K-12 data systems, was level funded at $34.5 million, despite the rapidly increasing amount of data collected in schools.