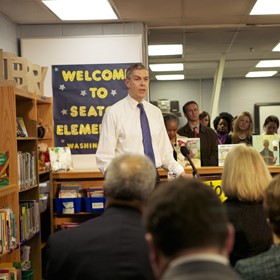 Speaking at an elementary school in Washington, D.C., on Jan. 12, U.S. Education Secretary Arne Duncan kicked off a flurry of activity around the reauthorization of the Elementary and Secondary Schools Act by declaring the need to refresh the law, formerly known as No Child Left Behind (NCLB).

" "I believe we can work together Democrats and Republicans to move beyond the tired, prescriptive No Child Left Behind law," " he said. " "I believe we can replace it with a law that recognizes that schools need more support more money than they receive today." "

Duncan went on to underline the Obama administration's priorities, including the need for the federal government to make substantial investments in education. He called on Congress to fairly allocate federal dollars among all schools regardless of location so that important resources like technology, instructional materials and safety measures are accessible to all educators, parents and students.

To help make this happen, he said Obama will include an additional $2.7 billion in his fiscal year 2016 education budget request, which includes $1 billion targeted to underserved schools.

Aside from educational spending, Duncan addressed the hotly debate topic of testing. NCLB requires that every child be tested yearly in math and reading from third through eighth grade and once in high school. NCLB's original stated goal was that all students, regardless of socioeconomic status, would demonstrate proficiency levels on those tests. Over time it emerged that 100 percent proficiency in both subjects was not possible, and the Department of Education granted to most states waivers that removed the penalties for schools and districts that failed to attain those goals. But the testing requirements remained, as the administration believed that the tests proved helpful in identifying individual students and particular groups that failed to achieve academically.

Additionally, student scores on the tests became a component — sometimes the largest component — of the teacher and principal evaluation systems that the administration demanded states establish as a condition of receiving NCLB waivers. With real-world consequences for their members attached to the test scores, teachers' unions and administrator groups began to push back against the testing requirements. Parent groups, for their part, complained that the tests took away too much learning time and that the focus on passing them drove the curriculum and limited course options.

Duncan, long a proponent of annual testing, reiterated its importance in his speech by stating he believes " "parents, teachers and students have both the right and the need to know how much progress all students are making each year toward college- and career-readiness." "

Patty Murray (D-Washington) took to the Senate floor the same day to defend annual testing. She said she would fight hard to preserve annual tests and " "work with states and districts to reduce unnecessary testing, especially by targeting redundant and low-quality tests." "

She emphasized that " "this is an obvious step we need to take — and one that you won't find much disagreement on. But that doesn't mean we should roll back standards or accountability for schools to provide a quality education." "

She also called for a more substantial investment to help support struggling schools across the nation.