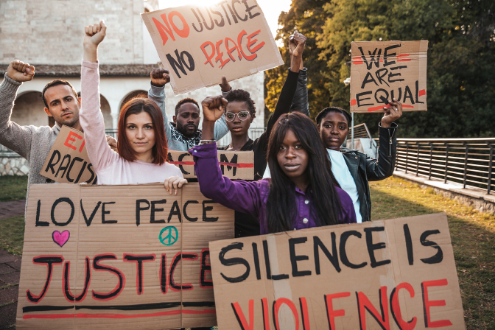 It’s not just about honoring King’s legacy. It’s a celebration of the past year’s victories in the fight against injustice — and a continuation of the ongoing struggle for civil rights.

“Civil action was really important to MLK. It continues to be important to those who say they intend to honor the legacy of MLK,” says the librarian, language arts teacher, educational activist and author of the ISTE book Liven Up Your Library: Design Engaging and Inclusive Programs for Tweens and Teens.

When observing MLK Day, as well as heritage months, such as Black History Month, it’s easy to fall back on performative gestures like sharing famous quotes, studying King’s writings or praising his fiery personality. But that’s not what these memorial events were intended for, Torres says. MLK Day, just like Black History Month, should instead be a culmination of the past year's efforts toward social justice.

“I think it’s really important to recognize that these days and months were intended to be an opportunity for people to showcase what they’ve been doing all year long,” she says. “The intention, according to Carter G Woodson, the originator of Black History Month, was that Black folks would be recognizing the contributions of other Black folks, and that the wider society would be doing the same, all year long.”

While there’s nothing wrong with honoring King’s legacy by studying the past, Torres encourages educators to shift their focus toward the future and use MLK day as a springboard to keep the conversations and social activism going throughout the year. She offers the following tips to help students engage with King’s work and legacy on a deeper level.

While it’s important to recognize the successes of those who have fought for change, it’s just as important to help the next generation take up the torch and continue the fight. One way educators can do that is by refocusing the conversation on what changes still need to happen, both in their communities and in society at large.

“They can use the day not only to performatively honor MLK’s words, life and works, but also the spirit of his work, which was attempting to change the way that we relate to one another and then also thinking about the role of society in serving folks who have historically experienced systemic and interpersonal racism and oppression,” Torres says.

For example, teachers can start by exploring Youth Participatory Action Research, a framework for engaging young people in a cyclical process of research and action to improve their communities and the institutions that serve them. Another option is to guide students in a critique of social oppression, in which they examine the causes of oppression and explore what it would mean to take action on behalf of others as well as themselves.

2. Celebrate the contributions of today’s activists

When teaching students about King’s legacy, don’t forget about those who are continuing his work today: his daughter, minister and activist Bernice King; professor and author Bettina Love; and younger activists, such as Malala Yousafzai — among many others.

“If we are educators and our role is to educate about MLK’s life, then we also need to look at people who have carried the torch and who continue to do that work — who are not getting the resources and who are not supported or recognized the way they should be — who are alive today,” she says.

Although MLK Day typically focuses on Black activists, Torres encourages educators to broaden their discussions to include indigenous folks and people of color whose work is in the spirit of Martin Luther King Jr.

“I think that he would want us to. There are various ways people can apply their own skills and talents to the fight for justice, and that’s something I think needs to be recognized.”

When discussing King’s life, it’s common to focus on his pacifism and messages of love. But that’s not the whole picture of who he was. King leaned more radical and became more determined toward the end of his life, and it’s apparent in his final speech, delivered in Memphis the day before he was assassinated.

"It's apparent from this speech that he knew he was going to die. He knew his days were numbered," Torres says. "People who live the way he did often know they may not live long lives, but we see from history that their flames burn twice as bright."

Activism was dangerous work in the 1960s, and it’s still dangerous today. Just a few weeks ago, Torres lost a friend, indigenous rights activist Alicia Cardenas, who was killed in her Denver tattoo and piercing studio.

“It’s still happening,” Torres says. “Though I will always mourn her loss, particularly because I believe it could have been avoided, I am more resolved than ever to pick up the work she was doing and make sure it continues.”

And that’s the real purpose of days like MLK Day — to not just commemorate activists of the past, but carry their work forward into the future.

“I’m hopeful that people will remember to study King’s life, his teachings, his work, all year,” Torres says. “The more collectively unified we can be, and the more resolved to bring about social transformation, the more success we are likely to experience as we move ahead to an uncertain future.”

It’s not just about honoring King’s legacy. It’s a celebration of the past year’s victories in…

May is Asian/Pacific American Heritage Month – a celebration of Asians and Pacific Islanders in the United States. The month of May was chosen because it commemorates the first Japanese immigrants to the United States on May 7, 1843. For educators, this offers an opportunity to celebrate the…

We’ve reached a watershed moment in racial history. What will educators choose to do with it?

When high school junior Jadyn Page first watched the video of George Floyd’s death at the hands of police, she sobbed for 20 minutes. Then she got angry. Then she took action.