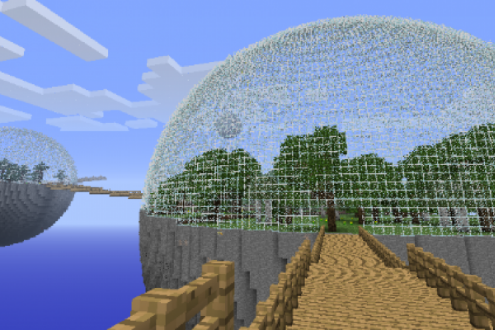 It was October. My Introduction to Computer Science class had been meeting for two months, and we were deep into a discussion about game design. One of my students gestured casually at the student across the room. “That’s right! I agree with what … what’s-his-name said over there.”

I was shocked. After the first week of classes, I knew all my students’ names. But our high school is so big that many students had few opportunities to interact. In my classroom, I ask kids to help each other find solutions to the problems they come across. That’s difficult when they don’t know each other very well.

I wanted to come up with a way for students to build community, so I decided to set up a classroom server and assign students to play Minecraft together. I wanted to see if playing the game would provide some scaffolding for team building.

Minecraft is an online 3D fantasy world where students build structures using digital blocks of glass, sand, brick and other materials. I used this popular game as a virtual ropes course that would allow kids to work together to solve challenges. If two kids go into the mountains and bring me back an iron ax, I know they have spent several hours watching each other’s back, going into dangerous areas and developing the technology to smelt raw iron ore into bars to make that ax. It is a tangible artifact representing hours of teamwork.

What I really wanted to find out, though, was if this digital collaborative experience would translate to the face-to-face classroom. If kids learn to work together in a virtual environment, would they watch each other’s backs in the real world? Would it make them more willing to admit to each other that they didn't understand something? By using Minecraft as a virtual world co-existing in tandem with my classroom environment, I hoped my students would develop strong working relationships while helping each other build houses, tackle community projects and make their world sustainable.

The Minecraft experience is fun and engaging, but it is also a catalyst for powerful learning. As a teacher, many of my biggest “teachable moments” — when we learn about civility and community and doing the right thing — actually occur when the laptops are closed and we are able to talk as a group about what’s happening. These lessons are inspired by Minecraft, but the good teaching occurs face to face.

I challenged students to build and maintain an entire community and village that would parallel their experience in the face-to-face classroom. The mission for our Minecraft world was to “create a self-sustaining community that reinforces trust between individuals and rewards prosocial behavior.” Students were expected to ask themselves at every point, “Does what I’m about to do create or destroy trust? Will it help my community?”

Some students argued that if we were to live together, we would need a strong set of rules, consequences for breaking them and some way to enforce those penalties. For example, breaking something another student built would result in being banned. Other students disagreed, saying that we could set up the server so that students physically couldn’t alter anything they did not own.

This led to a great debate about whether we should let technology control our actions or whether we should be allowed to make mistakes and live with the consequences of those actions. What if I invite you over to work on my house? Can we trust external systems to make ethical choices on our behalf?

Ultimately we decided to come up with some basic rules:

Once our world was up and running, students built all sorts of constructions that helped the community. Farms sprouted up across the landscape to provide food in case of emergency (if you don’t eat in Minecraft, you will die). Players created a community chest for others to take from or add to, as necessary. Surprisingly, they soon needed to add a second chest because people were leaving more than they took.

One student traveled around the landscape building enormous statues and billboards with cartoon characters. His creativity was impressive, but some students complained.

“I selected this site to build my house because it had a beautiful view of the ocean,” one student said. “Now I have to stare at the back of Winnie the Pooh’s head. Make him stop!”

“OK,” I replied. “But what rule is he breaking? We have rules against destroying things, but not against building things.” This puzzled my students for a while, until one spoke up.

“OK, I’ll just have him take down the ugly sculptures like the giant snake.”

Other students objected. “Wait! That’s the only beautiful thing he did! Take down the giant statue instead!”

“No, that one’s not so bad, but the billboard has got to go!”

We decided that judging the beauty of public art was difficult. We designated a public park away from residential areas where all could admire his work.

This episode turned out to be a powerful learning experience. “I just realized something,” said one student who approached me later. “In the beginning, we had a hard time coming up with rules because no one knew what was going to happen. Now I think that laws only exist because someone at some point in the past did something before it was a law.”

Another debate occurred over the use of TNT, a Minecraft block that can destroy large areas of the world. Some students argued that TNT should be banned from the classroom world because of the tremendous damage it could do if it were misused, and because “no one needs explosives that powerful.”

Other students created a petition to keep TNT in the game. After all, they argued, it is a time saver when clearing large areas of land, and “I have the right to use it responsibly.”

One student was so agitated that he sent an impassioned email pleading with me not to take away his large stash of TNT. If it’s misused, he said, “Ban the user, not the material!!!”

Every student had an opinion. When I pointed out the numerous parallels to our national debate over gun control, internet filtering and regulation of hazardous substances, the conversation spilled over into the real world. “I didn’t really know that much about those issues,” one student admitted. “But I feel like I’ll definitely pay more attention to them now.”

Great teachable moments, all inspired by Minecraft, but delivered face to face.

I was fascinated by other ways the virtual world spilled over into the real world as well. For example, instead of giving points for extra credit, which I have never been entirely comfortable with, I started awarding diamonds to students who went “above and beyond.” Although diamonds are a rare resource in the Minecraft world, they cost me nothing to produce and have no impact on my grade book. Yet they were just as powerful an incentive. I also found that students would sometimes give enchanted tools and potions as a “thank you” to other students who had helped them in class during the day.

Building trust in the Minecraft community

At first, I thought I could use Minecraft to teach lessons about physics or electricity, but I was stymied by some of the quirky physics involved. Minecraft follows its own set of rules. In the end, I realized that teaching content in Minecraft was not nearly as important as building the relationships and collaboration skills that would sustain my students when we started studying heavily for the AP exam in the second semester.

Minecraft offers powerful lessons in collaboration and relationship building. Students learn how the Minecraft world works, then tackle big, difficult problems within that game world. At every step, Minecraft offers the promise of building or creating something that has never been done before, using skills and partnerships that players have developed over time.

Because the server was up 24/7, my students played Minecraft outside school hours. I gave them assignments to complete, but during our class meetings, we studied course content, enhanced by my students’ willingness to help each other. The experiences led to successful interactions in their face-to-face learning because the students knew and trusted each other on a level that I had not previously seen.

The power of Minecraft as a catalyst for learning is in its ability to involve students in creating a shared world together, in all of its intricacies and challenges and difficult conversations. Good teachers are at the heart of this process, not just for providing a powerful learning environment to students, but also for helping them create meaning from the challenges they face and the choices they make. This teaching can take place when the laptops are closed, face to face. As students become better citizens in the virtual world, so will they develop powerful skills for negotiation and compromise that serve them well in the real world.

Douglas Kiang teaches computer science at Menlo School and is on the Development Committee for the AP Computer Science Principles course. He wrote a computer science curriculum focusing on maker education.
(Minecraft image by Jacob Rees on Instructables Living.)

This is an updated version of an article published on the ISTE Blog Sept. 16, 2014.