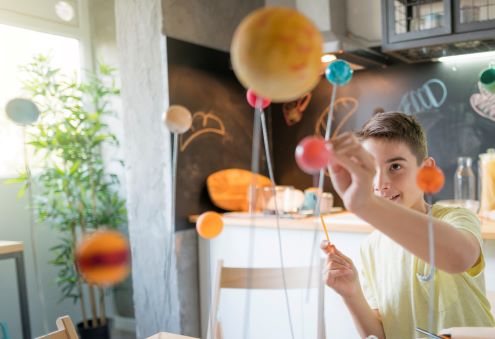 Radio Jove, a NASA citizen science project, provides a way for students and other everyday Earthlings to hear the radio waves generated by Jupiter through hundreds of millions of miles of galaxy.

For 20 years, the Radio Jove project has been selling kits that allow teachers and students — or anyone who’s interested — to build a simple radio telescope that can pick up radio waves generated by Jupiter as well as the sun and other galactic bodies.

The aim is to inspire interest in science and radio astronomy while teaching concepts associated with astronomy, physics and the scientific method. It also gives students a chance to build a scientific instrument and learn how to use it and the accompanying software. They can also collaborate with other Radio Jove participants by sharing and comparing data.

Kits and curriculum offered to schools

The project got its start in 1998 with a group of scientists who saw an opportunity to use simple radio astronomy to get students and the public involved in science. Since then, the project has provided 2,400 kits to participants in 70 countries around the world. It has also compiled a vast amount of scientific and how-to information on its website, including curriculum for teachers and suggested classroom activities.

A Radio Jove radio telescope consists of two sets of 10-foot high poles located about 23 feet apart and connected by a wire and a transmission line. A flat area of 25-by-45 feet is required. It should be located away from power lines and buildings to avoid interference. A kit costs $210 and requires another $75 in supplies to set up.

Chuck Higgins, a professor of physics and astronomy at Middle Tennessee State, was one of the founders of the project.

He said there’s a progression of learning that takes place with the project, from building the radio telescope, testing it and then identifying the sources of different radio waves. Radio waves from Jupiter and the sun have distinct sounds as do radio waves from man-made objects such as power lines. They also show up differently on the graphic readout generated by the software.

“Radio astronomy is the subject but it really spans many other subjects, too,” he said. “There’s some engineering, some electronics. Then, if you want to dig a little deeper, you can get into the science of radio waves coming from Jupiter or coming from the sun.”

Radio Jove is recommended for students in ninth grade and older.

“The same sort of physics that you learn with Jupiter and Earth applies to lots of places in the universe. It’s fundamental physics,” Higgins said.

Dean Knight, a physics and chemistry teacher at Sonoma Valley High School in California, has a Radio Jove antenna set up outside his classroom, which he uses to monitor activity on the sun. The antenna is connected to amplifier in his classroom, which he keeps on low volume. When a solar storm hits, the class can hear the solar radio waves and turns their attention to what they’re hearing.

“I use it to illustrate all kinds of things,” he said. “It’s physics in not only how the radio telescope works, but also in what it's measuring. It’s also kind of an interesting window to look into space with. Most people think of optics through using telescopes with mirrors and lenses. But here, we’re receiving radio waves.”

“We're here to help you if you need it,” Higgins said. “We have an email list that people can join and submit questions – ‘Hey, I heard something. Is that Jupiter and did anybody else get something at this time?’ Our Radio Jove team corresponds with people all the time and helps them learn and decipher what their data is showing them.”
Higgins said he and his colleagues will connect with classes via the internet or phone so students can ask questions.

An antenna isn’t absolutely necessary to participate in Radio Jove. A free version of the program’s software – Radio-SkyPipe – allows anyone to listen to a participant’s antenna.

Jerry Fingal is a freelance writer and editor who covers education, business and technology.

Radio Jove, a NASA citizen science project, provides a way for students and other everyday Earthlings to hear the radio waves generated by Jupiter through hundreds of millions of miles of…

Sten Odenwald wants to find a little peace and quiet. And he wants you to help him.

Odenwald, the director of citizen science for NASA, has started a project called Silent…

For astronomer Sten Odenwald, the smartphones we all use in our daily lives have some extraordinary scientific potential. For instance, the sensor a phone uses to help orient its screen can also measure gravity.

As the director of citizen science for NASA Space Science Education…