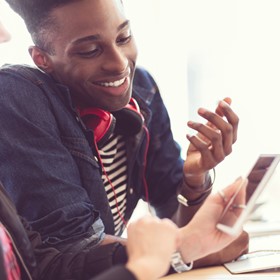 Digital media is changing how young people engage in civic issues, and educators say we need to give all students opportunities to become engaged citizens using the tools of the digital age.

During a refresh of the ISTE Standards for Students, a new definition of digital citizenship emerged. Feedback from educators revealed a shift in perspective that "spoke to students' use of technology to make the world a better place," says Carolyn Sykora, senior director of the ISTE Standards department.

"Educators recognized students were doing many good deeds using digital tools like crowdfunding to raise money or using social media to mobilize action for causes they cared about."

Rather than just warning young people about online risks or trying to curtail their activities, educators are realizing the importance of helping students leverage the power of digital media to work toward social justice and equity.

Digital media, on the other hand, can offer a "path of least resistance" for young people, says Harvard researcher Lindsay Pettingill.

"While online, young people can come and go from sites as they please, and they can make the best use of their time by multitasking — talking to friends, writing emails and checking the sports scores — all while a video they are contributing to is uploading," she says. "They don't have to leave the house, and they don't have to put down the things they are tethered to. Rather than see these 'social facts' as debilitating to democracy, they should be leveraged to get the most out of young people's desire to be active and feel a part of something beyond themselves."

"The internet offers a new model of civic participation, one measured by one's level of engagement as opposed to one's time commitment," says researcher Margaret Weigel. "One can sign online petitions, vote in online elections and contribute $5 to a cause of choice, all from a computer screen."

According to Harvard University's GoodWork Project, nearly 60 percent of teens create digital content, and one in three share their creations online. And in a nationwide survey, more than 40 percent of young people reported engaging in at least one online act of participatory politics, defined as "interactive, peer-based acts through which individuals and groups seek to exert both voice and influence on issues of public concern."

For many, this participation comes in the form of posting an impassioned plea on social media to inform or inspire peers to action.

But there's a big difference between posting something on Instagram and following a project through to its end. When posts go viral, events can quickly spiral out of control, leaving young instigators reeling from the impact of their digital participation — even when the outcome is overwhelmingly positive. Today's digital citizens need to be prepared for the possibility of massive success.

That's why parents, educators and leaders need to support students in putting digital citizenship into action while also helping them understand:

In one study, nearly half of the students surveyed failed to include social media as part of a strategy to effect change. Why? Possibly because they still haven't grasped how digital tools can expand the scale and scope of their actions, says researcher Amelia Peterson. Students need to consider scale when engaging online, asking questions such as, "How big could I go? How big do I want to go?"

Online modes of civic engagement — such as investigating issues, creating and circulating content, and engaging in dialogue about civic matters — are often dismissed as unimportant or disconnected from "real" social action, says researcher Margaret Rundle. Reinforcing the significance and efficacy of these actions can help encourage students to take advantage of the tools at their disposal.

The odds of a social media post going viral are low, but it's always a possibility. Students can prepare for this contingency by thinking beyond a project's immediate goal and considering the what ifs. For example, "Who can I turn to for help if this gets bigger than I expected?"

The nature of civic engagement is changing, says researcher Amelia Johns. Today's students are "the standard bearers of what the digital world is going to look like in the future, and, therefore, the shapers of what citizenship online will entail."

Watch the video below to learn about the five competencies of digital citizenship and learn more about DigCitCommit.

This is an updated version of a post that originally published on Sept. 14, 2017.
Tags
Digital Citizenship