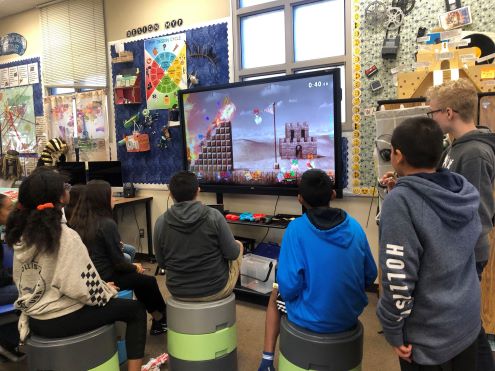 Students in Gina Baragone’s design class may never be expected to code a robot, engineer a 3D-printed roller-coaster or make a stop-motion animated mov­ie in a professional setting. In fact, by the time they enter the workforce, much of the technology they’re using today will have fallen out of date.

But that won’t matter. By the end of the semester, she hopes, they’ll walk away with the skills and con­fidence to tackle whatever technology they need to bring their ideas to life.

“The idea is to teach kids how to project manage and create things – to look at things in the real world and create their own take or spin on it,” says the teacher at Cesar E. Chavez Middle School in San Bernardino, California.

Structured to simulate the autonomy students would have as professional designers, the class aims to expose students to various technologies while teaching design thinking and project management skills. Each month, students choose from a menu of options, from robotics to 3D printing to digital pho­tography, and complete a list of independent tasks designed to teach them how to use the technology. After each task, they meet with Baragone one-on-one to demonstrate their work.

For the final, they’re asked to design and direct their own projects using the skills they’ve learned.

“Today we have all this amazing technology, but a lot of times we get stuck doing the same thing with everybody all the time,” she says. “The great thing about technology is that it makes it so easy to cus­tomize now, it’s easier to give kids what they need for where they’re at. I have three of these classes, with 36 kids each, and it gives kids the opportunity to really focus on what they’re interested in.”

The school launched the course last year as a STEM elective, garnering enough interest for a sin­gle class. As students discovered what it was about, however, word of mouth quickly spread, and the course became so popular the school added five more classes this year.

When teachers make all the decisions, students do just enough to meet expectations and learning re­mains superficial. Allowing students to make choic­es about what and how they learn is one of the key indicators of ISTE’s Empowered Learner standard.

By giving students the power of choice, Baragone’s design course invites them to dive deeper.

“I think an empowered learner is someone who is excited, focused and really wants to do it,” she says. “When kids have a choice, they’re no longer stuck doing it just for a grade. They can do some­thing they’re interested in, and they’re more focused on really wanting to learn how to do something and accomplish something. That’s far more empowering than saying, ‘I got an A or a B.’”

When the 3D printer in Baragone’s classroom jammed, she didn’t hear about it until a student had already Googled the problem, found an instruction­al video and figured out how to clear the jam him­self. Although students seek a lot of hand holding at first, they quickly lose their fear, she says.

“Early on when they fail, they come to me and ask, ‘What happened? Help me.’ I do help, but I en­courage them to see what they can figure out. By the end, they’ve gotten so comfortable with not necessarily being successful the first time, with fail­ing and trying again, that they have far less they’re coming to me with and worrying about. They’re not afraid to try things and see how it works out,” Baragone says.

They unleash their creativity.

The prospect of giving kids the freedom to direct their own learning can seem intimidating, but for Baragone it has revealed a completely different side to her students. Some who struggle in other sub­jects have risen to the top of her design class.

“A lot of kids haven’t been asked to be creative and think outside the box, so when they’re given the chance, they’re kind of surprised by it,” she says.

Sometimes they’re surprised by themselves. They didn’t know they could do certain things, like make a robot actually work. It opens them up to thinking they can do more than just take a test or write on a piece of paper.”

Watch the video below to find out what Baragone's student's think of this educational approach:

Nicole Krueger is a freelance writer and journalist with a passion for finding out what makes learners tick. This is an updated version of a post that first published on June 24, 2020.