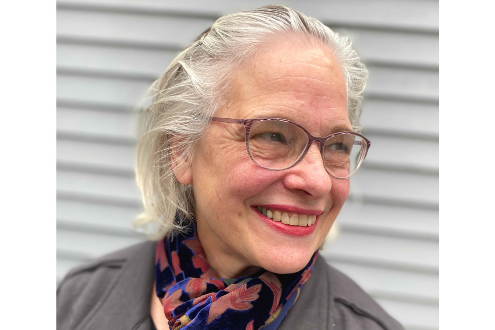 At an EdCamp, there are no agendas, no prepared presentations, no paid experts, no fees, no vendors. There are, however, whiteboards, pens, coffee and teachers. It’s a simple and powerful formula. Teachers show up, decide among themselves what they want to learn about, break into groups and go to it.

EdCamps have been phenomenally successful since their beginning in 2010. Since the first one in Philadelphia, thousands have been held across the country. In the process, they’ve attracted involvement from prominent organizations, including the Gates Foundation, PBS, TEDx and the U.S. Department of Education.

At the center of it all has been Hadley Ferguson, one of the original nine founders who went on to be the organization’s first executive director.  Though she’s no longer the organization’s leader – management of EdCamp has become part of the Digital Promise organization – Ferguson remains an enthusiastic booster and true believer in the DIY spirit of EdCamp.

“The power of it is that it's about providing a space for teachers to get together to talk to one another,” she said. “And that just continues to electrify teachers.”

For her efforts, Ferguson is the recipient of the ISTE Impact Award, which honors “individuals and organizations who do outstanding work to improve learning for all students and have a major impact as an example to the field of education.”

Ferguson is modest about her role in the EdCamp phenomenon.

“It was really the thrill of my life,” she said. “Honestly, when they told me I was getting the Impact Award, I was like, ‘But it's not me, it's not me.’ I had the huge privilege of being the face of EdCamp, but it's all those hundreds and hundreds of organizers that really deserve the credit.”

At heart, Ferguson is a teacher: She spent 14 years as a history and humanities teacher at a Philadelphia middle school. Prior to that, she home-schooled her children through the eighth grade.

But being a teacher is really central to what EdCamp is all about. They are collegial gatherings where teachers’ knowledge and experience are respected, Ferguson said.

And it wasn't the standard professional development, which was you file into an auditorium, you sit in rows and you have someone talk at you. We wanted teachers to know that we respected them as the professionals that they are and to provide a space where they could share with each other.”

The idea spread by word of mouth

Ferguson’s odyssey with EdCamp began in 2010 when a group of nine teachers gathered to talk about classroom technology at a BarCamp, the tech world’s equivalent of EdCamp. The gathering was such a success that the participants wanted to replicate the participant-driven model with educators.

The group arranged a space at Drexel University in Philadelphia and then all spread the word on Twitter. To everyone’s surprise, 250 people registered and about 200 showed up.

“We were blown away by how many people registered to come and by the energy that was in the space that first day,” she said.

Eight more EdCamps were held in 2010. The next year, there were 51. By 2014, more than 300 had been held. By then, the organization was getting small donations from tech companies that wanted to get their names in front of educators, and EdCamp registered as a nonprofit organization.

Through the work of another founder, Kristin Swanson, the organization received a $100,000 grant from the NewSchool Seed Fund, which allowed it to set up a foundation and hire an executive director – Ferguson.

She felt the position was a good fit. She came from a school environment where teachers were encouraged to take risks and get in front of the wave of classroom technology that was changing education.

“When this opportunity came up, it just made sense because I knew that teachers needed to be talking to each other and to be changing because we couldn't just stay the same,” she said. “After I became the executive director, it was the best job ever because my role was to champion these organizers and participants who were giving up their time and energy to make their classrooms the best they possibly could be for kids. That was the best job in the world, because I do believe that teachers working together can change the world.”

Ferguson said that when she started the job, “it was me in my den at home, sort of pacing around wondering what would I do.” She contacted tech companies to solicit donations to help launch EdCamp-in-a-Box, which the organization would send to anyone who wanted to hold an EdCamp. The boxes included name tags, markers, Post-it Notes, and a check for $200 for refreshments and incidentals.

Timing and simplicity were key

In the midst of that effort, the NewSchool Seed Fund suggested she attend a Lean Startup conference in San Francisco. It was there that Ferguson was contacted by Carina Wong, senior adviser for innovation for the Gates Foundation.

“I got an email in which she said she had been watching the EdCamp from afar and she was really interested in its growth,” she said.

They decided to meet. “We got together, had a great time at a little coffee shop, and I was just dreaming as big as I could dream. I figured why not?” she said.

She told Wong about plans to expand the EdCamp-in-a-Box effort. And about a leadership summit where organizers could get together and share best practices. And maybe grants for teachers to implement ideas they picked up at an EdCamp in their classrooms.

Wong was receptive and asked Ferguson to send along EdCamp’s business plan. “At which point I said, ‘Sure, my business plan.’ And on the plane back to Philadelphia, I'm Googling ‘business plan’ because I had never written one, let alone known what went in it.”

With help from Swanson, she wrote that business plan. The Gates Foundation subsequently gave EdCamp a $2 million grant for two years, which allowed the organization to implement those plans that Ferguson outlined to Wong. Ferguson said the expectation was that further bigger grants from Gates would be forthcoming but that was scuttled when the foundation shifted focus away from teacher networks. However, EdCamp did receive another $2 million from Gates, which put it on sustainable footing.

Despite all the high-profile support, Ferguson says timing and the simplicity of the model were big factors in EdCamp’s success. The concept took off at a time teacher networks on Twitter were just beginning to flourish and classroom technology use was taking off and the need for training was increasing.

“At that point in time, teachers were going to Twitter to talk to each other, sort of exclusively. There wasn’t as much noise in the atmosphere then. So, the word spread that way,” she said. “All of the camp organizers, especially in the beginning, were full-time teachers and not people who had extra time to do this. So, the fact that the model was easy to replicate meant that those teachers could put on this incredibly vibrant experience for the people in their area.”

EdCamp also tapped into something fundamental about teachers, Ferguson said.

“It just continues to grow because teachers always want to learn, they always want to improve their practice,” she said. “And they're constantly being faced with new challenges, as this last year can show. And most of the teachers who come to an EdCamp don't want to sit back and just teach in some rote fashion, they want the very best for their kids.”

Jerry Fingal is a freelance writer who focuses on digital education issues. He lives in Eugene, Oregon.