How Remote Learning Brought Out Creative Thinking in Schools 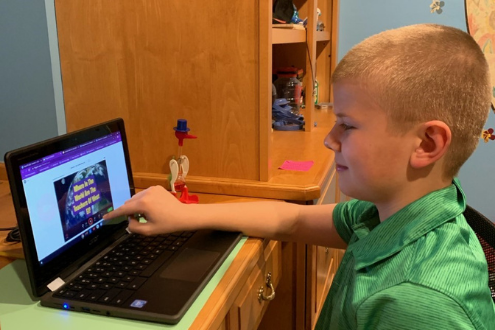 West TV has been a staple of Massachusetts’ West Elementary School for the last five years. When the show was on hold during COVID-19, technology coach Katherine Fowler could tell that the kids really missed it.

Fifth-grader Jackson Albert wanted to keep making his segment, “Where in the World are the Teachers of West El?” Last year, Fowler filmed Albert in front of a green screen while he gave clues about where a favorite elementary teacher might be. Students who guessed the location correctly got a shout-out from Albert.

This year, Albert has to film from home. He’s become a master of Flipgrid, importing images, setting up his Alexa to provide background music and editing it all himself.

When his home Wi-Fi cut out while filming an episode, he thought he lost all his clips. He found some of them and had to remake the others.

“Sometimes there are struggles when you’re working from home,” Albert says.

Sofia Zilberberg, also in fifth-grade, films the segment “What Day Is It?,” which highlights little-known holidays, such as Eat Chocolate Day. Zilberberg uses different blankets as backgrounds and has learned to improvise with lighting and headphones. She’s discovered that creating videos helps her learn. She uses her West TV skills in other classes.

Fifth-grader Gideon Barnes does the sports updates. He has had to stretch his executive functioning skills to time the segments with the game schedule. “It requires a lot of preplanning, but I love doing West TV,” he says.

Brooke Morris, fifth grade, hosts interviews with students. During hybrid learning, students at West Elementary are divided into two cohorts. The interviews allow students to get to know a classmate whose schedule may not overlap with theirs.

“It’s hard to meet new people this year,” says Sofia. “So this helps.”

Virtually producing their own segments has been an empowering experience for these kids, Fowler says. And it was all possible because the district values innovation.

“What's truly innovative about this project is that I see they are learning valuable life-long skills, such as collaboration, time management, commitment and responsibility, research, videography skills, presentation skills, persuasive writing skills,” she says. “The kids are doing the heavy lifting. The best part of all is they are not doing it for me. They are doing it for themselves and their school community. It really is a joy to see their dedication, creativity and hard work come together each week!”

While a worldwide pandemic may not have been the best way to bring more technology to schools, some have found new ways to empower students and reconnect with their communities. The most innovative have risen above their video call fatigue to reimagine the way teaching and learning are done. 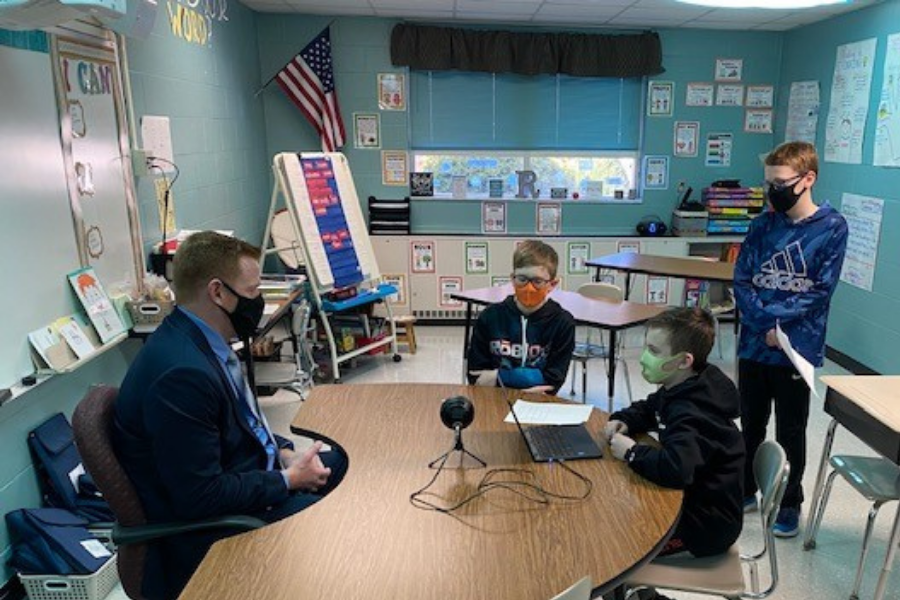 Much like the kids at West Elementary, students at Ohio’s Lakota Local Schools have also learned to communicate in a new way. Each year, school teams create and enter the NPR Podcast Challenge. But this year that looks a little different.

A group of students gathers in a small room around a microphone. They are all masked up and standing several feet apart. The subject this time around: An interview with the district superintendent about how COVID-19 has changed education.

In past years students from the junior high next door walked over and offered help and advice for the elementary students. At first, innovation specialist Kimberly Carlson thought there was no way for the project to continue. After all, it’s pretty close contact around that microphone, and the older kids couldn't visit in person.

Carlson decided to innovate with technology. This year, the elementary students put their scripts into a Google folder to share with the older students. The students work collaboratively, in real-time, on changes to the scripts. In the second round of edits, the older students make a video about how the podcast should look and changes the younger students should consider.

“If we can find a silver lining from COVID, it is that our teachers have flexed their technology muscles a little more. Their knowledge of using tech with students is leaps and bounds ahead of March last year,” she says. “Teachers who were old school and using handouts are diving in even more. I thought they would use it minimally, but they are the ones who are coming to my office to learn how to add a video or use Flipgrid. They are taking off with tech instead of seeing it as something they have to do.”

First the Seed Foundation sent students two packets of seeds, labeled N and P. One of the packages of seeds were collected on the International Space Station. Students hypothesize which one, then use the scientific method to determine if their guess was correct.

While students would normally do all of this in person in a classroom, they did the planting and observing at home this year. Just like in-person, Wright set up expectations for the virtual groups. Made sure each student has a specific task and a voice and that everyone is respectful of other opinions.

The class used Wakelet and Jamboard to post questions and record ideas and progress. This is a change Wright will definitely keep. “No paper to lose since the tools are virtual,” she says.

The class opened the results from NASA in a live virtual session. The hypothesis was correct! The plants that had been on the space station were less successful at germination and growth.

“It was a lot of fun and a great way to engage students and create a sense of wonder and fun,” she says. “Online learning is not going away. In Covid, we ’ve redefined what education can look like. Don ’t be afraid to try new things and imagine how you can adapt the experience to make it a valuable learning experience.”

The best part? Those tomatoes will ripen in students’ gardens while they are home for the summer.

Learning from the broader community

Some students are finding a wider community. A few years ago, two middle school students interviewed 98-year-old John Gualtier and wrote a book about the WWII veteran.

The BOOK BY ME project told the story of Gualtier’s life. During the war, he served as a medic, liberated a concentration camp, and had a Jewish prisoner die in his arms. Once he returned from the war, Gualtier struggled with PTSD and tried to kill himself twice. Now, he talks to students about suicide prevention.

Gualtier’s book, along with 90 BOOK BY ME projects about real-life people who lived through the Great Depression, World War II, and other important events in America ’s history, are typically found in school libraries. Deb Bowen started the project 18 years ago, connecting students with community members in their homes to hear their stories and look at photographs. When students could no longer visit neighboring homes, Bowen thought the project was finished.

While attending ISTE20 Live, she had an idea. Why not do interviews over Zoom? Still after years of going into people’s homes and having a face-to-face connection, Bowen worried the experience wouldn’t be the same.

“I know what it ’s been like in the past. A lightbulb goes on for the kids when they realize this person remembers where they were when Pearl Harbor was hit,” she says.

Could that connection be as strong over Zoom? Turns out that yes, it can.

“In the end, it was the same reaction I ’ve seen over and over, even on Zoom. I hate COVID, but it ’s also given us some gifts.”

Students and their families have taken to performing the books over Zoom as plays. Some have even acted out the plays over community radio stations, a medium familiar to many from the WWII generation. The remote aspect has allowed family members to join in who would not have been able to otherwise. One holocaust survivor acted out her skit with family members in Israel.

Gualtier’s story found new relevancy during the pandemic when so many people have been spending so much time alone. “It’s a good time to remind someone that their life has great value,” reads a line from the play.

“Hearing these stories in this particular moment has been powerful for students and storytellers alike. It’s a reminder that we can get through hard times,” Bowen said.

If there is one gift from the pandemic, it is that many more students than before have access to technology. Before 2020, just over 10% of California schools had 1:1 devices. Now, it’s less than 10 percent who don’t. This change has the potential to upend how we measure attendance, learning and engagements in our students, says David Miyashiro, superintendent of Cajon Valley Union School District, which has 68% of students on free and reduced-price lunch.

One example is the way schools take attendance. Most schools receive federal funding based on average daily attendance, meaning students who physically show up and sit in a seat for 6½ hours. Over the last year, schools began measuring screen time and packet completion instead of time in a seat.

“It’s missing the whole point of competency-based learning,” Miyashiro says. “COVID has shown us that students can attend anywhere, that progress monitoring rather than standardized testing can show us what we need, that learning in pods happens with or without a teacher of record. What we want is flexibility in terms of the types of measurements we use and how we define learning and attendance going forward.”

Now that most districts have invested in hardware, it’s possible to use metrics, diagnostics, and other tools that monitor progress and academic understanding at a deeper level. For instance, Miyashiro jokes that a report card is like an autopsy because it allows parents, teachers and districts to see an individual child's progress instead of just measuring him against his peers on one test.

“A lot of the flexibility we have right now is temporary. Now we need to utilize what we’ve learned to change the system,” Miyashiro says. “What I’ve learned is that the masters I’ve been serving in the past, the state and federal governments, testing and accountability, are the wrong masters. During the pandemic, we turned outward toward our communities, the students, and our families, and started serving them again.”