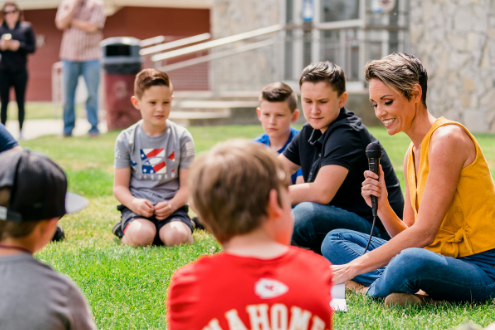 Third-grader Livo Lometti remembers the day his class started writing a book. His teacher, Sandra Hammond, introduced her students at Western Sierra Charter Schools in Fresno, California, to her friend Susie Harder, a real author. Hammond told Livo and his classmates that Susie had an idea in her head but needed some help to turn it into a book.

The class began a brainstorming session.

Hammond and her students looked at the illustrations for a book-in-progress, called Where's My Wish? They talked about what the characters were doing. What was the big idea? Was Ava feeling embarrassed or sad? What would be the most precise verb to describe what was happening in the picture?

Hammond jotted all the suggestions on the whiteboard, then the class voted on their choices.

While Livo and his classmates worked on the book, students from all over the world were also contributing. When the book is finally published, it will feature illustrations with no words. Each student will fill their book with text they write themselves, choosing to follow what the class wrote or creating their own story.

Harder is actually a speech-language pathologist, and the creator of Authorable. In 2020, she was struggling to offer teletherapy to her clients and helping her 5- and 3-year-old with online learning when a raging forest fire, known as the Creek Fire, raced through her hometown.

Many children lost their homes, and she wanted to find a way to help them cope. Drawing from her background as a speech pathologist, she tried to find a book that could give students the language to process what they were going through. She started looking for children’s books about losing a home in a natural disaster but found nothing.

So she decided to write one herself.

She had never written a children’s book but pulled together a draft of Where’s My House? in less than 24 hours. The book, featuring a heroic girl and a dog whose house burned, still needed some editing.

Harder engaged her young clients and other children from around the world in the process. She found an illustrator, held virtual “Ask the Author” events, and set up a platform for children to vote on various editorial decisions, such as setting and characters.

Soon she had co-authors from around the world participating in her Junior Authors Program. The book was published on Amazon and became a bestseller in four categories.

“The speech-path side of me loves empowering kids,” she says. “Helping kids be heard and seen is at the core of everything I do.”

Helping kids find their voice is what Authorable is all about. Harder records a writing session that goes to all the participating schools each week. The session describes a theme that goes along with the illustration. Some previous themes include perseverance, discouragement and hope.

Each student looks at the illustrations and writing prompt. Then the class goes through the brainstorming, writing and editing process one page at a time.

“Authorable is so great because so much of traditional education is about getting through the lesson, through the textbook,” Hammond says. “This program was designed as a semester-long writing workshop and includes many lessons that would normally take teachers a long time to do on their own.”

The students, Harder, and the teacher go through the publishing process together, including brainstorming, writing, editing for content, grammar and punctuation. Students also get to offer feedback to the illustrator.

Hammonds' class, which was also studying movement in art, noticed that the dog, who was supposed to be darting out of the room, looked like he was walking casually. They suggested the illustrator make the movement look more urgent. The class' suggestion was highlighted in the video during a live Q&A session with Harder the following week.

Meanwhile, back in the Fresno classroom, Livo describes the page his class worked on recently. The main character, Ava, writes down her wish to make the world a better place. The dog grabs the wish and runs to show it to the whole school.

“It was a really nice wish, but she gets embarrassed about it,” Livo says. “Ms. Hammond asked if we had ever been embarrassed and, yeah, it happens to all of us.”

As students considered how the character might feel, they reflected on their own experiences. Each year’s book addresses something that kids need help understanding.

Last summer, Harder interviewed elementary school principals and teachers, asking questions like “What SEL concerns do you have for students following distance learning?” and “As a school leader, what are your biggest concerns for students next year?”

Sandi Howard, principal of Big Picture Education Academy, summed up the responses, “Based on our K-8 student surveys, the biggest thing kids don’t have right now is hope.”

Harder designed this year’s book, Where’s My Wish? about a girl who makes a wish to make the world a better place.

“I can’t tell you how many great conversations we’ve had about the weekly things – comfort, hope, discouragement. It was always hard for me to end that conversation because they wanted to talk about their own experiences," says Hammond. "Susie has poured her whole heart into this. She wants this to be more than just writing. She wants these conversations to be soulful."

Connecting to the world

There are opportunities to connect with students in other places with classes worldwide participating. Students can submit questions to the team, and their classroom may be highlighted in Harder’s National Ask-the-Author series, which makes the kids feel famous.

This year’s book has provided a unique opportunity to connect to current events. “Where’s My Wish?” illustrator, Dmytro Geluh, lives in Odesa, Ukraine. In the beginning of the project, Gelug and Harder used to Zoom weekly, but since the war began in February she sometimes does not hear back from him for several weeks. When she does hear from him, she posts his videos on Authorable’s Facebook page for the community to see.

Students write letters and send pictures for Harder to forward to Gelug, “to inspire hope for him and his family,” she says. In addition, students have submitted messages of hope for kids in Ukraine, and Harder asked musician/songwriter Damien Horne to use the lyrics to write a song.

Giving back to communities

Where’s My Wish? publishes this summer. Participating schools can order copies of the book wholesale before the public release and then sell the book at its retail value, meaning the school can net about $10 per book. Schools can use that money for their community in whatever way they choose. Some schools have added Little Free Libraries to their neighborhoods, while others created a community garden or donated their proceeds to a pet shelter.

“I'm excited to see how this evolves over the next year,” Harder says. “Because kids are so excited to use their book to do something meaningful for their community.”

Third-grader Livo Lometti remembers the day his class started writing a book. His teacher, Sandra Hammond, introduced her students at Western Sierra Charter Schools in Fresno, California, to her friend Susie Harder, a real author. Hammond told Livo and his classmates that Susie had an idea in…

Hue-An Wren’s fifth-grade student didn’t appear to be a likely candidate for a book club. He was an English language learner and a struggling reader on an independent education plan (IEP).

There are dozens of digital tools that are transforming reading  — and we’re not just talking about e-readers and tablets. Innovation in literacy-focused edtech goes far beyond the format — whether it’s a physical book, a comic book, an ebook or audiobook — and focuses on enriching the…