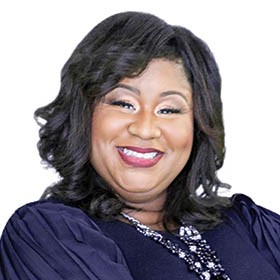 Why is the sky blue? Why are there waves? How do bees make honey? Where does the sun go at night? How do birds fly? How do lightsabers work? This question will make sense later. Promise.

They're basic questions, but we all need to start somewhere, and these queries build the foundation of a lifetime filled and fueled by intellectual curiosity. The best learners never stop asking, and the best teachers never stop answering.

" "I approach everything as a learner," " says the executive director of instructional technology for Atlanta Public Schools. " "Then I'm better able to develop systems and other platforms to train my teachers and facilitate their professional learning. I thoroughly enjoy teaching others." "
Henderson-Rosser has come a long way. Even though she grew up surrounded by educators — both her parents are teachers — she had no desire to join the field. She believed science was her calling, being a doctor her destiny.

" "I need to know how things work," " she explains. " "Biology allowed me a hands-on opportunity through dissections and other experiments to really own the knowledge. [A career in] education was nowhere on my radar." "

Fatigue and fate, however, had other plans. By the time Henderson-Rosser finished her undergraduate work at Oakwood University, an institution based in Alabama and known for producing African-American doctors and scientists, she was " "exhausted." " The rigorous curriculum took a toll, and her career path took a different direction.

At her mom's suggestion, Henderson-Rosser headed home and took a job as a teacher's assistant in the DeKalb County School District in Georgia. It wasn't long before she made her mark.

" "Elementary schools don't really teach science, so I became the science girl," " she says. " "I saw a need, and I began teaching informal science classes in the library. Before this, students were planting a potato and watching it sprout. I thought, 'Oh, my gosh, there is so much more to science than this.'" "

Henderson-Rosser eventually created a lab where the learning was hands-on and the students' interest in science was through the roof. Her little researchers didn't just read about a sheep's circulatory system or a cow's heart — they were able to feel it and take an active part in learning.  This early success paved the way for a professional career that stressed innovation and imagination.

After landing a new job teaching science at a middle school, she quickly realized that not only were students responding, but her peers and supervisors were taking note of her teaching skills, as well.

" "Every school has a person, a teacher, who collects knowledge [and brings it back to share]," " she says. " "I was that teacher. My principal would tell me, 'There's something new. Go learn it and teach us.'" "

That's how she discovered a gap between how students were learning in a modern and rapidly evolving world and how teachers were teaching. It became obvious to Henderson-Rosser that someone needed to focus on training the trainers.

In no time, Henderson-Rosser joined the DeKalb County school system as a districtwide trainer on technology. Given her science background and the boom in all things digital, technology was a natural fit on her new career path.

" "I saw technology as a way to facilitate learning," " she says. " "In science, you use the best calculator or the best microscope. Technology is an excellent tool to help teachers get students to the best learning outcomes." "

Henderson-Rosser expanded her reach by establishing the DeKalb Online Academy, which helped teachers prepare to virtually instruct students. This academy was the first of its kind in the county.

She's proud these programs are part of her legacy, and she's grateful for the support she received along the way, especially from organizations like ISTE.

" "ISTE played a huge role [in the development of the institute and the academy]," " she says. " "ISTE has been a monumental part of my career. It showed me what's possible in education." "

Now as the supervisor of more than 5,000 teachers in the Atlanta Public Schools, she is a leader in showing what's possible and in finding new ways to learn.

She's pursuing a doctorate in educational policies, with a concentration in instructional technology, that focuses on how children learn and constructing knowledge. Constructivism, as it's known, emphasizes the importance of the knowledge, beliefs and skills an individual brings to the experience of learning. It's like understanding how the Force applies to students.

Of course, no Jedi mind trick or special effect can create lifelong learners and committed teachers who keep asking questions and demanding answers.

It takes people like Aleigha Henderson-Rosser. As Yoda might say, " "The Force is strong with this one." "

As the school year begins, the effects of the COVID-19 pandemic has left teachers, parents and students exhausted and weary. Yet, most kids (and parents!) are eager for school to start, and every teacher I’ve had the privilege to speak with wears their superhero cape and mentions wanting to be…