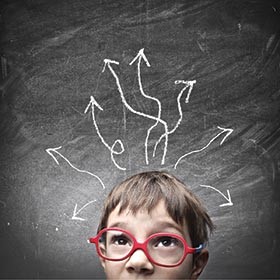 When Jeannette Wing shared her vision in 2006 that computational thinking (CT) would be “a fundamental skill used by everyone in the world by the middle of the 21st century,” little did she suspect that her words in a scholarly research journal would ignite debate in higher learning, stimulate conversation in the K-12 education community, and forge a global pathway to problem solving that would transcend disciplines and grade levels during her lifetime.

Internationally recognized for her expertise in computer science, Wing is corporate vice president of Microsoft Research after having served on the faculty at Carnegie Mellon University for more than 27 years, including two stints as head of the computer science department. In between those chair positions, she was assistant director for computer and information science and engineering at the National Science Foundation from 2007-2010.

The term computational thinking was first coined by Seymour Papert years before Wing’s three-page article published by the Association for Computing Machinery (ACM), but it was Wing’s expanded explanation and examples of what CT is and is not that captured the imagination of educators. Her vision eventually led to a joint project of ISTE and the Computer Science Teachers Association (CSTA), funded by a grant from the National Science Foundation to develop CT materials for K-12 education.

That project began in late 2009 with the intention of first defining a common language surrounding CT and identifying challenges and opportunities to integrate CT throughout all grade levels and into the mainstream. The project followed three strategies:

The operational definition of computational thinking for K-12 education that came out of the project is:

Computational thinking (CT) is a problem-solving process that includes but is not limited to:

These skills are supported and enhanced by a number of dispositions (attitudes) that are essential dimensions of CT. They are:

Wing’s seminal article turned out to be a catalyst to examine how students today and in the future can apply computational thinking skills to all fields of study and even to everyday life. Today, she says the growth and recognition of CT has exceeded her expectations. “It’s happening in my lifetime,” she admits.

“When I put out that three-pager, I was just hoping the university would offer classes that included computational thinking so students wouldn’t need to be a computer science major to apply it,” she says. “Then at the National Science Foundation, we explored the idea of introducing it to K-12. The vision was that all high school students would be proficient in CT.”

Wing points out that some fields have been transformed by the use of CT, notably biology and statistics, but also the humanities. “I’m seeing nonscience disciplines being transformed. It’s kind of happening on its own,” she says.

“Computational thinking does not replace skills; it adds to one’s repertoire of skills,” she explains. “I think of CT as adding to the sophistication of problem-solving skills. I actually believe people already think computationally but don’t know it.”

Wing likes to use the simple example of cooking in the kitchen for a dinner party, applying CT components to determine the ingredients and measurements for the number of guests, assess cooking time and coordinate prepared dishes in order to present all items on the table at a prescribed time. “My mother read that article and called to tell me that she is a computational thinker,” she laughs.

Still, the road to the universal application of CT across disciplines in K-12 education is hardly without potholes, something even Wing acknowledges despite the movement’s advances. In the United Kingdom, the Ministry of Education now mandates that K-12 schools incorporate CT, but she notes that teacher training in CT in the UK is insufficient, just as it is in the United States. She also believes “computer science must be taught in a more positive way so that kids will ask the question, ‘How does this work?’”

Carolyn Sykora, senior director of the ISTE Standards program, explains that a primary charge of the collaborative project that ISTE and CSTA undertook was to make CT accessible to K-12 teachers, to build interest in thinking skills and integrate them into the curriculum. She says the emphasis is on thinking skills but not always with the use of a computer. The goal is to become more aware of what steps are needed to solve a problem and to apply that skill across disciplines. Another expectation is that students will become not just tool users, but tool creators, a skill useful in their personal lives as well.

Sykora believes students are the quickest to accept the concept of computational thinking, but that for some teachers it can be interpreted as just another new skill to learn themselves and teach, adding to an already heavy load of responsibilities. “Teachers are still in the early stages of embracing CT, but once they break down the components, they get it,” she says.

Karen North, a Texas-based computer science education consultant and ISTE member, is a strong proponent of CT and says she taught its principles in varying degrees throughout most of her career as a teacher at the high school, middle school and elementary levels. She agrees that teachers are often saddled with so many responsibilities that they feel just one more requirement will break their backs, if not their spirit.

However, North feels equally emphatic that CT can be embedded creatively in all disciplines and that resources offered on various websites, including the ISTE website, can open up a world of new opportunities and discovery. ISTE members can find a plethora of information for teachers in all grade levels at iste.org/computational-thinking.

A particularly informative document, “CT Vocabulary and Progressive Chart,” outlines examples of activities associated with the nine components of computational thinking for every grade level:

“It makes no difference what career you go into, you will need computer science skills to succeed,” North predicts.

Computational thinking is at the core of computer science. North suggests a good place for teachers to start might be at csunplugged.org, where free learning activities related to computer science are available for all ages.

North would like to see state legislators get behind the CT movement, mandating more teacher training time for understanding how the CT framework can enhance learning in all areas of study. She is actively engaged in that effort.

Another ISTE member whose 34-year teaching career was almost exclusively in computer science before he retired 10 years ago is Joe Kmoch. Today, he spends much of his time reaching out to middle school students and young professionals, introducing them to the world of algorithms.

He believes in the importance of critical thinking skills found in CT and says, “We can do a better job of getting more examples of CT in different subjects. We need to get teachers to think about the lessons they have taught and think about the nine components in computational thinking. Many of them will realize they are doing it already and discover that it is just the vocabulary that is different. People begin to understand those nine components and see how it can be applied to or enhance the lesson.”

Kmoch believes CT will be more readily accepted with better lessons aimed at teachers of topics other than computer science and notes that the National Science Foundation is now infusing the need to apply CT in its grants. “We need to get people out of the silos,” he adds.

One of the most recognizable names in computer science education is Chris Stephenson, the 2004 founder of the Computer Science Teachers Association, where she served as executive director for 10 years before joining Google to become the computer science education program manager. She says that since 2011, she has seen CT expand throughout the world in countries such as Great Britain, Australia and New Zealand, to name a few.

“Jeannette [Wing] lit a fire as to STEM education, and you can see the power of her idea as it moves across the globe,” Stephenson says. “We hear more about it in the sciences, but it is just as much in the humanities. One example of that is the use of computational thinking in the practice of capturing and saving old languages.”

Are there barriers to universal acceptance of CT? Stephenson puts it this way: “I don’t think there are barriers, just unfamiliarity. Lots of teachers think that it is just another new thing to try. It falls to the [education] community to help make the connection between what they are teaching and how a problem-solving movement can apply to their subjects. This is about how methodology can be applied to world problems.”

In other words, successful implementation of CT is all in the way it is presented to teachers. “The responsibility lies with the people who are helping teachers see how it applies to what they are teaching.”

Stephenson tells of a recent workshop where teachers were offered an opportunity to ask questions or challenge CT validity after the presentation. Instead, the teachers wanted to share how they were planning to use it in their classrooms, now that they understood it.

While Google was involved in CT education before she was hired, Stephenson says a Google project called Exploring Computational Thinking is being revamped and will be a repository of resources when it is completed before the end of the year.

One area Stephenson would like to see the CT discussion expanded to is in teacher preparation programs. “There are not many programs that incorporate CT for students working toward their teaching certification or credentials,” she says. “ISTE membership has always brought richness to the importance of technology tools, and I encourage them to help colleagues see the power of an idea and how CT can be applied across disciplines.”

Prophecy for the future

In February 2014, eight years after her article created a stir that continues to gather steam, Jeannette Wing addressed the Columbia Journalism School, where she repeated her contention that computational thinking will eventually be a fundamental skill of everyone in the world.

“To reading, writing and arithmetic, let’s add computational thinking to every child’s analytical ability,” she urged. “Computational thinking is an approach to solving problems, building systems and understanding human behavior that draws on the power and limits of computing. While computational thinking has already begun to influence many disciplines from the sciences to the humanities, the best is yet to come. Looking to the future, we can anticipate an even more profound impact of computational thinking on science, technology and society — on the ways new discoveries will be made, innovation will occur and cultures will evolve.”

Linda Estep is a former reporter for McClatchy newspapers and was the public information officer for a large school district in California. Today she works as a freelance writer covering education policy.