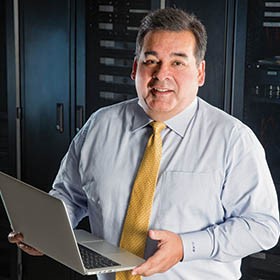 Forty motorcycles in a row, engines revving. Riders look to the left and right, sizing up the competition, ready to seize the moment.

It’s this moment that drives these racers. The moment that tests courage, fuels competition and challenges – no, forces – the racer to be absolutely locked into the finish line.

The adrenaline is addictive. The buzz mesmerizing. How can you leave this sport and turn your back on such a rush, when all the unique elements – track, fellow racers, weather – conspire to push you in ways you never dreamed?

The answer is simple: You find other opportunities that provide the same juice. Of course, you also realize that the years peck away at boldness, and you need to seek out safer challenges.
For Clayton Wilcox, Ed.D., a one-time motorcycle racer turned superintendent of Washington County Public Schools in Maryland, this is easy, because Wilcox has a grudge against complacency. He likes to compete, especially on an inward level. It’s who he is.

“[When I raced motorcycles], it was a series of crazy moments,” Wilcox says of his college fascination.
“You have to fully commit to the task at hand. There’s great liberation in the moment of competition. I get the same feeling flipping the switch on a new project or new technology for students as I did when I raced. … I think if you talked to my staff and colleagues, they would say I’m present to a scary degree.”

For Wilcox, when it comes down to it, it’s the students who provide the juice, followed closely by his peers. It’s not the technology or the projects or the results – all very important, to be sure – but the people who matter most to Wilcox. And thanks to his adventurous nature, he knows a thing or two about building relationships.

Born in Cedar Falls, Iowa, and raised in the Midwest, Wilcox, now 58 and a father of two, has lived all over the country, held a variety of positions, and understands the value of creating and maintaining connections and putting these skills to work on behalf of his students.

His résumé is proof. After a successful stint at Scholastic Inc. in New York, where he rose to the level of senior vice president of education and corporate relations, he returned to his roots when he took the job in Maryland. After all, he started his career in education as an elementary instructor in Waterloo, Iowa, where he later became a middle school science teacher, assistant principal and principal.

He would later become the superintendent of schools in Pinellas County, Florida, the 22nd largest district in the country, and the superintendent in East Baton Rouge, Louisiana. And now he’s back where he feels he really belongs.

“I worked for the best education publishing company in the world,” says Wilcox, a three-year member of the local affiliate of ISTE. “But my heart is in the service of kids. They are my constituency. I would sell great books, but I couldn’t see [the learning]. Now I get to see the results of my work.”