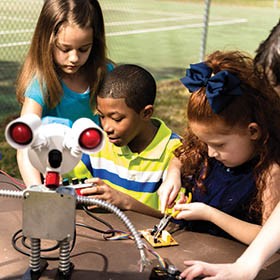 Make magazine founder Dale Dougherty certainly provided the impetus for the maker movement when he launched his publication nearly a decade ago but the grassroots effort, albeit on a much more basic level, has exISTEd for as long as humans have created things.

" "Everyone makes at some level, but we have forgotten about it," " says Dougherty. " "Once we understand who the makers are, we can find them in history. People like Benjamin Franklin and Henry Ford might be considered makers. Apple founders Steve Wozniak and Steve Jobs were tinkerers and designers." "

Whether we cite Franklin and Ford or Seymour Papert, who in the 1960s defined constructionism and studied how technology can provide new ways to learn, makers have been creating for years.

What is new is how quickly the maker movement the technology-influenced DIY community has gained momentum, especially in recent years. Technology has rapidly accelerated, providing more people with access to innovative devices that enable them to create, rather than just consume.

With the technological ability to have more creators, Zach Kaplan, CEO of Inventables, an online hardware store for designers in the maker movement, says, " "The key driver is that the cost of tools such as 3D printers, CNC (computer numerical control) mills, and things like an Arduino and Raspberry Pi motherboard and other core tech products have come down and are in the reach of normal consumers." "

For the less tech savvy, there are thousands of magazines, podcasts and YouTube videos for those wanting make their own products, and, if they choose, sell them online. Nearly anything can be used from junk to complex tech tools because the aim is to create something meaningful and connect the physical world to the digital realm.

" "In a society where so much is mass-produced and locked down, the movement allows everyone to realize they don't have to take things the way they are presented to them." "

Lisa Abel-Palmieri, an ISTE member and director of technology and innovation at the Ellis School, an all-girls school in Pittsburgh, Pennsylvania, says the movement is about giving kids the opportunity to explore, do hands-on learning and use hands-on media to create solutions.

" "It provides hope for reigniting how we look at education in a progressive way, and assists students with the skills they need for the future in terms of experimentation and having a growth mindset where they fail fast and are able to bounce back," " she explains.

Abel-Palmieri says her school has gone through a shift in its curricular program in the last two years. To stay relevant, educators focus on experiential learning and partnerships, design thinking and maker education to define and solve problems.

" "STEM is a huge focus," " she says. " "By incorporating maker education, we've seen a huge uptick in science and math course enrollment." "

There's also the tinkering process, she adds, which is a great way to get younger students engaged in making. " "It empowers them to learn where they are creators and experimenters. There may not be a bigger project in mind. It doesn't have to be about the technology or creating a project or solving a problem, but it is a great way to show kids they can make things." "

Pronovost agrees and says the maker movement gets students re-energized about learning.

" "It is truly about the integration of so many of the curricular subjects that were siloed as high-stakes assessments became more prominent. The con is that learning is not so cut and dry, as it's not easily assessable on multiple-choice assessment. Additionally, the movement has a lot more avenues for individual paths even toward the same goal so it can be hard to assess individual work and progress in comparison to peers." "

Still, Abel-Palmieri says students can feel like they accomplish something quickly and gain competency in what they are doing while being engaged in a way different from a written assignment.

" "Say a student is an artist," " she explains. " "In the past, they might have felt that science wasn't their thing. This engages students in new ways where they otherwise have not been engaged." "

Another huge advocate of the maker movement is Sylvia Martinez, coauthor of the book Invent to Learn and a past ISTE member. Martinez has worked in schools around the world to bring the power of authentic learning into classrooms, particularly in STEM subjects. She calls the movement nothing short of a global, technological and creative revolution that will change the way we produce, market and sell goods and services worldwide.

" "Plus it's cool!" " she says. " "Want a new watch? Don't ship it across the world, just print it out! Better yet, design it yourself and then print it out. Using gee-whiz technology to make, repair or customize the things we need brings engineering, design and computer science to life. Something this epic should be on every educator's radar." "

Martinez says the maker movement overlaps with the natural inclinations of children and the power of learning by doing.

" "For educators, I believe that being open to the lessons of the movement holds the key to bringing the best learner-centered teaching practices back to the classroom. This is a way to dramatically change the conversation back to authentic learning." "
She adds that in too many cases, science and math have been stripped of practical applications because of a false premise that practical math is only for students who don't go to college.

" "This is a recipe for disaster, and I think we see the results in students who gradually lose interest in STEM subjects over the years. We cannot and must not continue to pretend that success in STEM subjects means memorizing the textbook." "

Brian Jepson, publisher of Maker Media's book series, says making has made him wish he paid more attention to geometry in high school.

" "From a personal experience, a lot of times when I am working with a CNC or a 3D printer or a modeling program, I think, 'This is why they taught geometry.' Why do I need to have these realizations in my mid-40s? Why didn't I learn this when I was a kid. I wouldn't have this incorrect attitude about the math I was taught." "

For educators wondering where and how to start implementing the maker movement, Pronovost offers these words of advice.

" "Just dive in. Try giving your students a little more flexibility in a traditional project, such as a poster presentation, and rather than have them present on a topic, ask them to solve a particular problem based on your curriculum. Students may lean toward digital tools or hands-on materials. Allow that variety." "

When it comes to what makes a good makerspace, practically anywhere will do.

" "Our first one was in an abandoned portable classroom," " recalls Pronovost. " "While many of the six others I'm building this month will also go into an empty classroom, we have to be more flexible due to space at a couple of our sites. We're also considering a small trailer modeled off the school's Sparktruck." "

Abel-Palmieri says to have a maker mindset in your school, you don't actually need an official makerspace.

" "It can happen in existing classrooms with recycled materials. Materials don't have to be expensive. [However], to develop a makerspace before a maker mindset is there does not set you up for success. It's about creating a space in the curriculum for maker education to be a part of what they are doing." "

For instance, The Ellis School has two " "innovation stations" " in middle and high schools where students participate in pre-selected activities every month. At the high school level, projects tie to what is happening in class. At the middle school, students make projects that are not tied to the curriculum, such as creating an origami animal that lights up.

While the benefits of a maker education are numerous, funding remains a challenge.

" "Even though our Ravenswood Makerspace Collaborative was just awarded a STEM Innovation Award by the Silicon Valley Education Foundation, funding our work has been difficult," " says Pronovost. " "Many of the skills learned are critical-thinking skills, not rote facts. That has made it harder to get the foundations and companies we have reached out to for support to say, 'yes,' as they rightfully want a simple way to judge if their money is being invested well." "

Jepson suggests jumping in simply to prove that your group can build something around it.

" "Funding varies so much," " he says.  " "One thing that seems to be common is starting out with something that is easy to get. For some people, that's a vinyl cutter that allows you to make signs or decals. Those are $3,000. One group did a Kickstarter campaign to buy a laser cutter to cut various materials." "

The good news is the maker movement has been elevated to the national level. Just this past June, President Obama held the first-ever White House Maker Faire.

Dougherty told Phil Larson, senior adviser for Space and Innovation in the White House Office of Science and Technology Policy, " "Making sits at the intersection of art and science, and at the crossroads of technology and design. Makers are using new tools and technologies that are democratizing production. With better tools, more people can make things because it is easier to take an idea and develop it into a physical thing." "

Many wonderful things have been created from the maker movement. When asked what the stands out in her recollection, Abel-Palmieri says, " "I would say that would be the artificial limbs using Autodesk and a 3D printer. Our school worked with the Quality of Life Technology Center on developing assistive technology devices for those with disabilities." "

Another team at The Ellis School created an assistive hair-tying device for a woman with Parkinson's who was unable to lift her arms to style her hair.

" "This had always been important to her, so the students developed a hair prototype device that would help her pull her hair back." "

For Jepson, it was seeing a 17-year-old student make a Segway clone from scratch that one could actually ride.

" "That was pretty amazing," " he says. " "I would not have expected that. Technology often separates us from the real world, whereas when you approach it as a maker, you have a lot more control and ownership to the technology. It doesn't own you anymore." "

Lisa Kopochinski is a freelance writer and editor who has written for numerous publications in many different industries in the United States and Canada. She has covered education topics for more than 15 years.