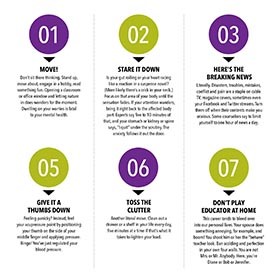 Educators are under some serious stress. According to a recent survey, 69 percent of teachers reported receiving work-related emails from senior staff outside of work hours, with nearly 85 percent of these receiving emails on weekends, 76 percent during school holidays and 43 percent when they'd called in sick. Educator networks are full of news about expanding job roles and additional mandates.

Think this is why roughly 40 percent of adults say they lie awake at night plagued by the stressful events of the day? Ha! We're just getting started.

In addition to being potentially vulnerable to the physical effects of chronic stress, scientists have discovered that folks who work day in and day out with youth who have experienced trauma begin to show the same symptoms as their students. It's called vicarious trauma. Even the small things put a load on our psyches. On the most-common-anxieties-at-work list, look what made it into the top 20: keeping up with technology, forgetting something, being seen as incompetent and dressing inappropriately.

Now, here's what you do about it during or after work hours (click to englarge):