The role of robotics in connecting curriculum to deep, meaningful learning 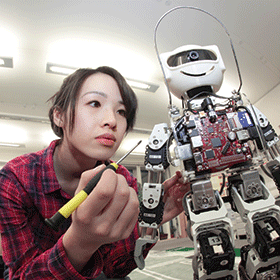 The biggest thoughts often come from the littlest people.

A Canadian second grader had just spent an hour or so coding with his classmates when the child was asked a simple question: “What have you learned?”

“Today taught me that anything is possible,” the child said. “I kept wanting to give up when I couldn’t make the computer do what I wanted, but I kept on trying and having a growth mindset. When I couldn’t get it, I asked a friend, and we realized that two brains are better than one.”

That little gem is the kind of comment exciting Kerry Zinkiewich, an innovations consultant at Kawartha Pine Ridge District School Board in Peterborough, Ontario, Canada. She’s found that if you want to get a close-up view of the progress in teaching robotics and coding around the world, start with these “littles.”

From a primary schooler’s sense of wonder to high school students building a prosthetic hand for the disabled in Clovis, California, robotics and coding education over the past five years is igniting worldwide interest as teachers gain expertise and new products make it possible for teens and college students to improve the world right in their classrooms. Plus, it’s super fun!

Kindergarten students in Zinkiewich’s district are enchanted with a little critter called Bee-Bot in their classroom. As the children learn to program this floor robot to do things that make them giggle, they also are doing serious brain business, like learning direction, location and procedural writing.

And the educators are having just as much fun. One particularly delightful day for Zinkiewich involved a field trip to a local high school, where innovative primary school teachers teamed up with high school counterparts. Eleventh grade students were trained to teach the kindergartners how to program Lego Mindstorm robots.

“To say the day was a success is an understatement,” Zinkiewich says. “All the kids, young and old, had a blast.”

It is a very good day when school is fun, but job one for all teachers and learners is to connect that fun with the fundamentals of the curriculum. Where, exactly, do coding and robotics fit into what schools are charged with teaching?

Here is a start: Robotics students and teachers are making connections in math to spatial sense, patterning and problem-solving, reasoning and proving process. In social studies, there are connections to mapping, and in language to reading a new language and procedural writing.

“Teachers are starting to see how different robotics kits like Lego Mindstorm, Lego WeDo and Vex can not only grab student attention but also help them learn concepts required from the curriculum in deep, meaningful ways,” Zinkiewich says.

One seventh grade classroom used the Vex IQ kits to reinforce the Cartesian Plane by having students program the robots to move to various locations along the X and Y axis. In primary classrooms, students use the Lego WeDo kits to explore various ways machines move, and to link the characters they build and program to story writing.

Zinkiewich also is excited by the creative way teachers are approaching the curriculum. It is no longer a series of skills to check off.

“If we truly want our students to learn deeply, we need to consider the urriculum differently and bring students’ interests and questions into the planning process. Robotics and coding supports that happening.”

This year, Zinkiewich has made it a point to talk to many different people in the world outside of education who use coding and robotics in their real lives. One coder wishes that people applying to work with him knew how to think and problem solve. He finds that many people can write code but have no idea what to do when there is a problem.

“This is what coding and robotics teaches our students,” she says. In the future, “we have no idea about the types of jobs that our students will be performing. However, we do know that there are some skills that will be needed.”

“Of course, they won’t all be addressed without careful planning of tasks by teachers,” Zinkiewich notes.

From struggler to scientist

Technology teacher and iste member Trevor Takayama of Amherst, Massachusetts, watched a sixth grade student he calls “J” go from a struggler to a scientist in just a few weeks.

J had an aide every day because learning in the classroom was such a hardship for him. There was one exception – he loved technology class. If only, the young boy wished out loud, this exciting time could be more than just 40 minutes once a week.

One day, during an elective makerspace time with Takayama, he built a fully functioning robot from only a few parts with a Lego EV3 kit in one class. He asked Takayama to please save it for him until next time.

The following week, his teacher gave J his own iPad mini and demonstrated how to use the Lego Commander app to connect to and control his robot – which the child named “Bob.” When the next two classes met, J was no longer the struggler but the center of positive attention from his classmates on his “awesome creation” as he drove the robot down the hallway.

J is one of Takayama’s favorite success stories.

“When students free build or free play with robots, you can really see them being scientists,” Takayama says. “They love to test things out, push the boundaries of the programming and try out the cool new toys. It’s fascinating to see what they can come up with; each student does something different, and teachers usually learn a thing or two from them.”

Takayama has been working as a technology teacher for five years in California and Massachusetts. He loves working as a specialist because he gets to teach students how to code, control robots, create presentations and become Google masters.

Robotics kits mean “they often build in groups,” he says, “which helps build their communication and teamwork skills. It is amazing how caring, helpful and kind they can be when they work together. Adults can learn a lot from them!”

Oh, and for J, this was not temporary success. “At the end of the year, he told me that technology class was his favorite part of school, and he wished that he could spend the whole time in school building robots.”

Get real with students

Mark Gura, iste member and author of Getting Started with Lego Robotics and Make, Learn, Succeed published by ISTE, was an early adopter.

Robotics, Gura says, is a perfect example of showing students how they will live and work in the world they will encounter as graduates.

“The whole point of student robots and programming them is for kids to see that there are ways for humans to talk to machines and to instruct those machines to do the things we want,” Gura says. “Further, to see robots as machines that we create to solve our problems.”

It is very much about applied student creativity, and therefore, he believes, it is one of the most relevant things educators can offer.

Gura got started in robotics as a way to play and discover with kids after school. And he highly recommends that strategy as a starting point.

As a curriculum coordinator for a group of middle schools in New York City, he purchased some Lego Mindstorm kits, and then sat with a few teachers and students for a couple of after-school sessions just playing and experimenting, sharing their discoveries and fun.

“Later on,” he says, “we sought more formal, precise understandings, but this was a great way to start. Playing alongside the kids to figure things out was one of the best examples of how technology redefines learning roles and processes I’ve ever witnessed.”

But the rapidly exploding marketplace for robotics teaching tools can be a bit intimidating. His advice for beginners? In essence, there are three varieties of robotics materials for students:

“I find Bird Brain Technologies’ Hummingbird Robotics Kit intriguing because it encourages kids to see the expressive side of robots as they work on the technical and functional aspects of making what I see as kinetic sculpture perform in unique and artistic ways.

“In my mind, this offers kids so much, both the creative possibilities of visual art and of robotics, in the same project. Wonderful!” Gura sums up.

It's all about the base: computer science

Hadi Partovi, founder of code.org, completely understands the fascination with robotics. He’s a big fan, too. Perhaps you saw him hanging out with R2-D2 at ISTE 2016 in Denver?

However, Partovi has a big message of his own. Behind every great robot is one critical thing: computer science, perhaps the most neglected academic necessity in our schools today.

Check out code.org and you’ll see a vigorous campaign to make computer science classes available to every child in every school in America. Site visitors get an opportunity to make that happen in every community, and there is a petition to sign, pledging support for the effort. Hundreds of thousands of people are on board.

His statistics are pretty startling if you are listening to political discussions that focus on the need to multiply the job opportunities in our country:

Those jobs are just sitting there, waiting for our students to be trained and to snap them up. Did we mention that these jobs can pay 40 percent more than the salary of the average college grad?

Partovi, his colleagues and partners are pushing for computer science to be part of all core classes in high schools, right along with algebra and biology. A huge part of his mission is also to encourage more girls and students of color to jump aboard this great opportunity.

This fall, 500 U.S. high schools are launching AP Computer Science classes in a partnership with Code.org, the College Board, National Science Foundation and TEALS, which stands for Technology Education and Literacy in Schools, among other partners.

It should not be this hard.

Research shows computer science is in the top three most popular academic interests of high school students, just under subjects like art and design. Code.org’s research shows 90 percent of parents in the u.s. want their children trained in computer science, yet many schools are still striving to meet the need and demand.

Gail Marshall is a writer and editor for The Fresno Bee, a metropolitan newspaper in California. She also owns and operates a freelance business, Marshall Arts Communications Consultants.