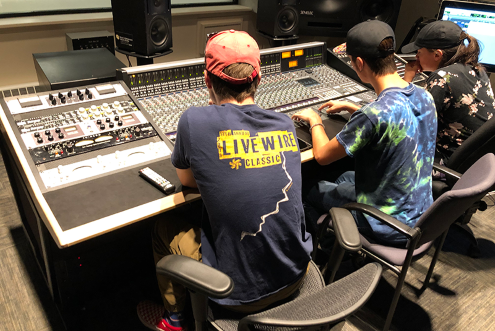 The modern classroom is evolving from the older “top down” structure to a more open and collaborative environment, empowering students to create and present what they learn. Today’s students are true digital natives, accustomed to using technology to express themselves, and new teaching styles must leverage that change.

The AV equipment many adults remember from school is now a relic — rigid, clunky and profoundly limited in scope and function. AV supporting the inverted, active classroom is flexible and able to change at a moment’s notice. It’s easy to use without requiring AV staff, allowing students to pilot systems for their own projects. And it scales to meet needs, adding and replacing devices as needed.

Legacy AV in schools is firmly rooted in assumptions and teaching styles of the past, which invites severe technical limitations. Legacy AV was assumed to always be used in a “one-to-many” model, wherein instructors might present to a class of students, but students were rarely assumed to be involved as users. Devices were deployed with point-to-point connections that rigidly confined signal paths to installed cable paths, so that any change was costly and time consuming.

Students today rightly believe they know how to use technology to create documents, videos, music and more — and they are the ones who know best how to share this with others. Empowering them with flexible, digitally connected AV is only one essential step toward realizing the benefits of active learning.

The network is ready to transform teaching and learning processes.

Modern AV is built entirely upon a resource that already exists in countless schools, offices, auditoriums and stadiums — the computer network. Networked AV is a mature technology supported by thousands of products. It allows AV resources to be distributed anywhere the network can reach, providing easy control of all devices via software.

Networked AV platforms, such as Audinate’s Dante, enable schools to deploy systems quickly, anywhere on campus and without the need to run special dedicated cables. Because it is controlled entirely by software, any educator with a computer can securely leverage the system to give students the tools they need to share their work with the class, and for teachers to maintain control.

While networked AV has applications ranging from K-12 and well beyond, universities have been among the earliest and most enthusiastic adopters of this technology. Schools like the University of Colorado - Denver and Cal Baptist University are using audio networking to centralize management of AV campuswide and allowing music performances in one location to be mixed and distributed by students in different studios on campus.

Another AV application that is enabled by networking is lecture capture. Previously, this meant recording a class using local equipment, converting the recording to an appropriate format, then placing that recording in some accessible file storage for students. AV-over-IP allows lectures to be streamed in real time to any location on campus while simultaneously enabling recording to servers or even student computers, saving time and easing student worries.

Increasing numbers of cost-effective products are projecting networked AV into the K-12 market. Easy-to-use endpoints like wall plates, microphones and compact speaker systems are finding their way into classrooms, giving instructors the flexibility they need to operate the system on their own without taxing AV department resources.

The biggest challenges to AV in education is the perception of sunk costs in legacy equipment and a lack of education about AV-over-IP in IT departments. Analog systems are expensive to install, requiring dedicated cabling throughout a facility, which often gives the impression of greater value. After all, it cost quite a bit to put it in place. For IT departments, AV-over-IP represents a new use of their system they rightly need to understand in order to help manage.

Both challenges are overcome by training and education. Once IT departments grasp how easy it is to support high-quality AV-over-IP, it becomes an opportunity for them to help in ways they couldn’t before. And when it becomes apparent that existing networking hardware can be used to deploy AV, fears about cost of deployment melt away. Moving media to the computer network is a step in a much more powerful direction, one that will remain relevant for years to come.

Specifying AV-over-IP systems is easier than ever, thanks in large part to the proliferation of thousands of ready-to-use AV-over-IP devices from hundreds of manufacturers. Because schools tend to be among the most well-networked environments, the ability to quickly “plug and play” when it comes to AV endpoints solves both the costs and complexities involved with typical installations.

Further, a domain manager software that brings the management layer to the system provides user authentication for security, organization of devices in rooms and buildings, and complete logging of all activity, campuswide.

Currently, the de facto standard for AV networking across the audio industry is Dante. It is integrated natively with the most products and guarantees interoperability across the board.

Brad Price has had many roles in professional audio from design engineer to marketing expert, as well as being an active performing musician on both coasts of the U.S. He received his B.S.E.E. from MIT, having taught undergraduate acoustics with Professor Amar Bose, and has worked with audio companies as diverse as Alembic, Phoenix Gold, Audio Precision and Audinate. For more information, visit www.audinate.com/ddm-edu.

Teachers understand how critical it is to use quality curricula in the classroom, and they know it’s important to help students select books that match their needs and interests.

But students today are learning from an expanding array of digital content, both at home and at school.…

There are dozens of digital tools that are transforming reading  — and we’re not just talking about e-readers and tablets. Innovation in literacy-focused edtech goes far beyond the format — whether it’s a physical book, a comic book, an ebook or audiobook — and focuses on enriching the…