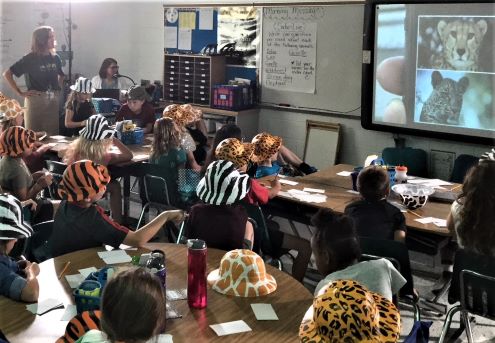 “The wow effect is amazing, especially when they see their names up on the screen as the naturalist answers their questions,” Moore said.

The safaris transport Moore’s students, who are growing up on the Atlantic coast, to a land completely unlike what they’re used to. It connects what they’re learning in their science units to the real world.

The live and unscripted nature of the safaris lets students feel like they’re participating in an event. And it’s a thrill for students to see the naturalists talk directly to them as they answer their questions, Moore said.

SafariLIVE, which brings free virtual safaris to schools, has spread quickly in classrooms around the globe since it was introduced in U.S. schools in 2015.

The safaris are produced by a company in South Africa, but it was Moore’s husband, Erik, an edtech specialist in Virginia Beach, who was the catalyst for bringing the livestreams to the classroom.

Erik Moore was poking around the internet looking at livestreams one day in 2015 when he stumbled across a live video showing a pond in Africa.

As he turned his attention to another screen, he heard voices coming from the African site. At first he thought it was an ad, but he soon discovered it was a naturalist answering viewer questions in real time. He decided to type in his own question in the chat box.

“A minute or two later, I hear, ‘Oh, good question, Erik from Virginia Beach,’” Moore said. “I was like, you got to be kidding me.”

What Moore had discovered was safariLIVE, which has offered twice-daily three-hour webcasts from wildlife preserves in South Africa and Kenya since 2007. Naturalists in open-air vehicles lead the tours as they bounce across the landscape of Kruger Park in South Africa and Maasai Mari park in Kenya.

The live question-and-answer feature made Moore think that it would work well in classrooms. After about of month of watching the webcast, Moore got in touch with the owners of safariLIVE, Graham and Emily Wallington, to see if they were interested in offering the livestreams to schools. SafariLIVE is part of the Wallingtons’ larger WildEarth organization, which specializes in live wildlife broadcasts.

The Wallingtons happened to be planning a trip to Washington, D.C., in the coming months and Moore agreed to meet with them. At that meeting, the three hammered out how Moore would pilot a school version of safariLIVE at Landstown High School.

The pilot went even better than expected.

“Some of the teachers told me that kids who never said anything were taking part in it,” he said.

Moore was soon rolling out the program to the Virginia Beach district’s 80 schools.

“The reception from students, teachers and administrators was 100% positive,” he said.

The livestreams are free to schools

The first elementary school class to see safariLIVE was taught by Stacey Moore. She has since made it a regular part of her curriculum.

“You are able to observe the animals in their natural habitats while sitting in a classroom,” said Stacey Moore who teachers third-graders at Three Oaks Elementary School in Virginia Beach.
To further spread safariLIVE, Erik Moore made presentations at the Virginia Society for Technology in Education and at the ISTE conference in San Antonio, Texas, in 2017. He also promoted it via social media and Google+. Since February 2016, there have more than 1,400 45-minute safaris beamed into classrooms, libraries and children’s hospitals around the world.

Erick Moore has promoted the safaris voluntarily, which is in keeping with safariLIVE’s mission. It is offered free to schools and there is no advertising. WildEarth earns its money by licensing live wildlife broadcasts to cable network NatGeo Wild and broadcasters in South Africa, China and elsewhere.

Focus is on inspiration and relaxation

The live safaris are part of the Wallingtons’ mission to connect children to nature. They believe that connecting people to nature is good for both people and nature.

“We believe that people need to understand why they should conserve nature and that ‘why’ is an emotional rather than logical motivator for each individual,” Graham said. “Being in nature is relaxing, inspiring and healthy. When people watch our safaris live they experience a similar set of feelings as if they were actually there.”

Graham said most natural history media focus on what needs to be done to conserve nature rather than providing something to viewers, such as inspiration and relaxation, which will motivate them to want to conserve it.

“This is even more true for kids who really need to understand why nature should be conserved and the best way to do that is to show them what far-off wildlife, e.g. Africa, can mean to them in their daily lives,” he said. “Guilting kids into wanting to conserve nature simply does not and will not work. Each kid we connect to nature is a future conservationist.”

The livestream activity offers an opportunity for educators to address one of the indicators of the Global Collaborator standard within the ISTE Standards for Students, which states: Students use collaborative technologies to work with others, including peers, experts or community members, to examine issues and problems from multiple viewpoints.

“I think that children are intrinsically motivated to learn about animals,” Moore said. “I think they care for them and they want to know more about them.” It also plants a seed in children about conservation and stewardship of the Earth. “I think it’s something that grows as they grow,” she said.

Jerry Fingal is a freelance writer focusing on education and business.

“The wow effect is…

I recently came across the T-shirt I was given when I volunteered at the 30th ISTE conference. In case you’re wondering, it still fits, as does the role ISTE has played in helping me stay ahead of important innovations in education.

ISTE has always been about seeing the future and…