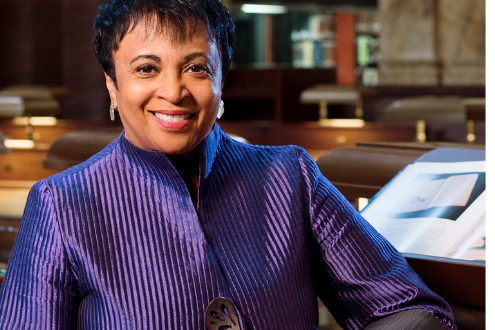 Carla Hayden is an anomaly. She’s not only the first woman and African-American to hold the Librarian of Congress position – she’s actually a librarian, too.

That makes her the second in a string of 14 historians, lawyers, even a poet who have held this post by presidential appointment.

Hayden’s personal love of books goes back to the days when she had to sacrifice buying a hamburger to pay her late fines when she forgot to return Marguerite de Angeli’s Bright April to her local library branch in Queens, New York. These days, her focus isn’t on giving up as much as giving back as she oversees the Congressional Library, with its wealth of knowledge and treasures that include Wonder Woman comics, Lincoln’s Bible and the original lyrics to “Do-Re-Mi” from “The Sound of Music.”

Her role is to assist Congress in locating its research targets among the 164 million items and hundreds of miles of bookshelves, and overseeing the U.S. Copyright Office. The latter means that Hayden is the person who, through 2026, will determine whether particular works are subject to the Digital Millennium Copyright Act for technological access protection.

In her spare time on the job, she’s also responsible for naming the U.S. Poet Laureate and awarding the Gershwin Prize for Popular Song.

But, as she told The New Yorker, supporting legislators and scholars alone falls short of her dream for the institution.

“We want to grow more scholars,” Hayden asserts. After all, her theme during the year she headed the American Library Association was Equity of Access. “If you can absorb information yourself and make your own decisions, that’s a freedom,” she said in an interview with The New York Times Magazine.

While earning her master’s degree in library science from the University of Chicago Graduate Library School in 1977, Hayden was an associate/children’s librarian in the Chicago Public Library system. After a stint teaching at the University of Pittsburgh School of Information, she returned to the Windy City to serve as the deputy commissioner and chief librarian at her old stomping grounds.

But by 1993, Baltimore lured her away to serve as the executive director of its Enoch Pratt Free Library for the next 23 years. Only a request from personal friend Barack Obama, asking her to dive into the national scene, was powerful enough to say “yes” to relocating her office an hour south on I-95.

Hayden earn Baltimore citizens’ respect from all sides when she insisted on opening the Pennsylvania Avenue branch after the Freddie Gray riots, and joined her staff in helping provide a refuge during those troubling times.

She’s also publicly disagreed with Washington bureaucrats over granting the Justice Department and the FBI access to library user records under the Patriot Act. Her action earned her Ms. magazine’s Woman of the Year honor in 2003.

We sat down with her to discuss her vision for the library and for learners.

What is something in the Library of Congress’ 164-million-item collection that might be of particular interest to today’s educators? And what about to students?

The library’s primary source materials are so wonderful for the classroom. Thomas Jefferson’s first draft of the Declaration of Independence lets students see the edits and notes to our founding document in his own handwriting.

The personal papers of Rosa Parks, which the library recently put online, include a letter she wrote reflecting on her arrest and really is an example of history coming to life in a very personal way.

The Chronicling America newspaper collection is an extraordinary resource that enables students and teachers to search millions of historic newspapers from all across America and read accounts of historic events.

There are so many things, and these are just a few places to get started.

What book would you recommend to today’s students?

I just want people to read, so I try to avoid recommending specific books. Books can be windows to other places, and they can also be mirrors, reflecting ourselves back to us.

The book that first resonated with me in a huge way was the latter, so for young readers, I hope they can find books that allow them to see themselves a little bit.

Also, there’s a book called A History of Reading that includes a chapter I believe is very important about forbidden reading. It talks about what happens when reading is suppressed. It’s important for everyone to understand reading is not something to take for granted.

What changes do you hope to bring to the Library of Congress during your tenure?

I want to build on the legacy of librarians before me by expanding access to the treasures of the library and making the institution more relatable.

There is something here for everyone and every interest – from historic documents to baseball cards. I want to digitize as many unique collection items as we can, and also do more programming that surfaces collections that are a little more unexpected.

We just had a pop-up exhibit of comic books, for example. Lynda Carter of television’s “Wonder Woman” spoke and we had a cosplay contest. It was not only great fun, but exposed the library and its collections to people who maybe weren’t sure there was anything there for them.

When you left Baltimore, a high school librarian was quoted in the Washington Post calling you a rock star. How do you think you earned rock-star status and how do you feel about that description?

I love that, because librarians don’t necessarily have an image like that, and they should!

How has technology – particularly the internet – changed the role of libraries? It’s no longer just a place to check out materials.

It’s interesting there is this perception that just because you can search for things online you don’t need libraries, and in fact the reverse is true.

I often refer to librarians as the original search engines. These are individuals who have dedicated their lives to organizing information and becoming experts on the range of resources that exist and how to find them.

Libraries and librarians serve a role of helping distill information, of helping patrons figure out the authority of different sources, and offering computers and technology that helps equalize access to information for many people.

What is the role of the community library today?

This really ties back to your previous question, because libraries today are more like “opportunity centers” in many communities. It’s the place where many people connect with not only information, but have access to computers and online resources. It’s where many people go to fill out job applications or access health information.

They are also places for connecting with others in the community through book talks and poetry slams and other events. Libraries today are actually, in many cases, having to create quiet spaces because there is so much activity.

What role do libraries have in teaching media literacy and digital citizenship?

In your role, do you have plans to address information literacy and what students and educators need to know about traditional online sources?

The Library of Congress has an excellent team in our Educational Outreach Division that develops wonderful primary source-based materials for classrooms.

The skills students develop as they are taught to analyze primary sources are the same skills associated with information literacy in the digital realm, and topics we help teachers with frequently during our Summer Teacher Institutes and through our online resources.

These are skills like critical thinking, questioning the source of information and determining the validity and reliability of sources, pushing students to consider bias and point of view, and helping students realize the importance of multiple sources.

How has access to primary source documents, thanks to technology, deepened learning?

Technology provides such a wonderful opportunity to connect students directly to pieces of history. I mentioned previously the first draft of the Declaration of Independence. Any student with an internet connection can see that – on a phone, on a classroom tablet or a computer at the local library.

The library is using technology to connect students in other ways. For instance, we have created about 20 Student Discovery Sets for Apple devices on topics ranging from women’s suffrage to scientific data to Thanksgiving. These sets combine photos, maps and other primary sources in various formats, enabling students to draw, make notes and answer questions.

This is an updated version of a post that originally published on Oct. 1, 2017.

When Texas librarian Valerie Tagoe agreed to sponsor a graphic novel and anime club for high school students who were passionate about manga, it opened the door to all sorts of new activities in the library: cosplay, manga-related arts and crafts, and a selection of graphic novels for students…

Lakisha Brinson used to envision herself writing cards for Hallmark.

An introvert with a proclivity for introspection, she understood early on that people need to feel like their voices are being heard.

“Connectedness is important to me, and so is getting people to see that…

It was her second year as a language arts teacher at Montbello High School in Denver. Coming from a suburban district in Park City, Utah, she realized her methods weren’t translating well in…