How 8 ISTE Conferences Shaped Me as an Educator 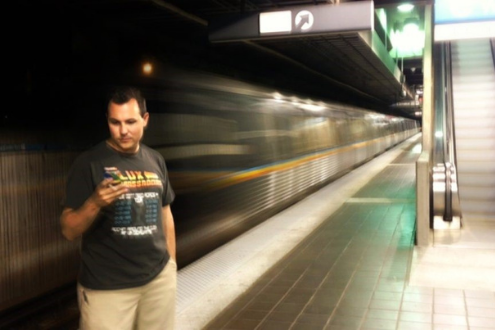 ISTE20 Live will be my ninth annual ISTE conference, and it promises to be unlike any other ISTE conference. So while I plan out how to successfully attend this conference and continue to work on building my own presentations, it feels appropriate to look back at my last eight ISTE conferences and see how they’ve shaped me as an educator.

So sit back and read some of my highlights of what I’ve learned – and what you might learn at ISTE20 Live.

My first ISTE Conference was ISTE 12 in San Diego when educators first started using Twitter to find each other and share ideas.

I was determined to make the most of this conference. After all, most of my favorite educators from around the world would be at this conference. So, I booked every minute of my time in San Diego and had the perfect plan.

Narrator: But he did not have the perfect plan.

I learned pretty quickly that 1.8 million square feet of conference center is a lot. I also learned pretty quickly that I knew a lot of people at this conference. So I ended up doing something like this: walk to my first session, run into someone I know from my PLN (but haven’t met in person yet), stop and talk to them for 10 minutes, keep walking, run into another person, stop and talk to them for 15 minutes, realize I’m walking the wrong way, run into someone else I know and convince them to go to a session with me. This happened the entire time, and it ended up being the perfect conference experience. This was when I developed my trick for navigating conferences: be OK with seeing part of a session, and take time to talk with amazing people.

ISTE 13: Vaulted by an ISTE Award

While San Diego was only a two-hour drive from my home, San Antonio – site of ISTE 13 – was much further and I had to find a creative way to fund my trip.

Enter the ISTE Awards. I applied for the Outstanding Young Educator Award, mostly because the prize was free registration and a stipend that would cover airfare. I met both requirements for this award: I was under 35, and I was using technology in a creative way by writing songs and making videos with my fourth and fifth grade music students and publishing them as a podcast.

As it turned out, I won a different award, ISTE Emerging Leader! This award both allowed me to attend, and gave me the encouragement to continue pushing what was possible with technology in my classroom.

The absolute highlight of ISTE 13 was hearing Adam Bellow give the closing keynote. I knew Adam a bit: We chatted on Twitter and met during a session the day before. I was so excited to hear an educator I knew on stage in front of 10,000 of our closest friends.

And then, about halfway through his keynote, I heard a song that I wrote with my fifth graders. And 10,000 other people heard that song, too! As a teacher, I would regularly share projects my students were making. And I would remind them that by posting it – to Twitter, my blog, or my podcast – that the world could hear it. In that moment, in that massive room in San Antonio, thousands of educators heard my students sing, and heard the music my students wrote. It was a powerful reminder of how good news can spread, and how student voice can transform education. 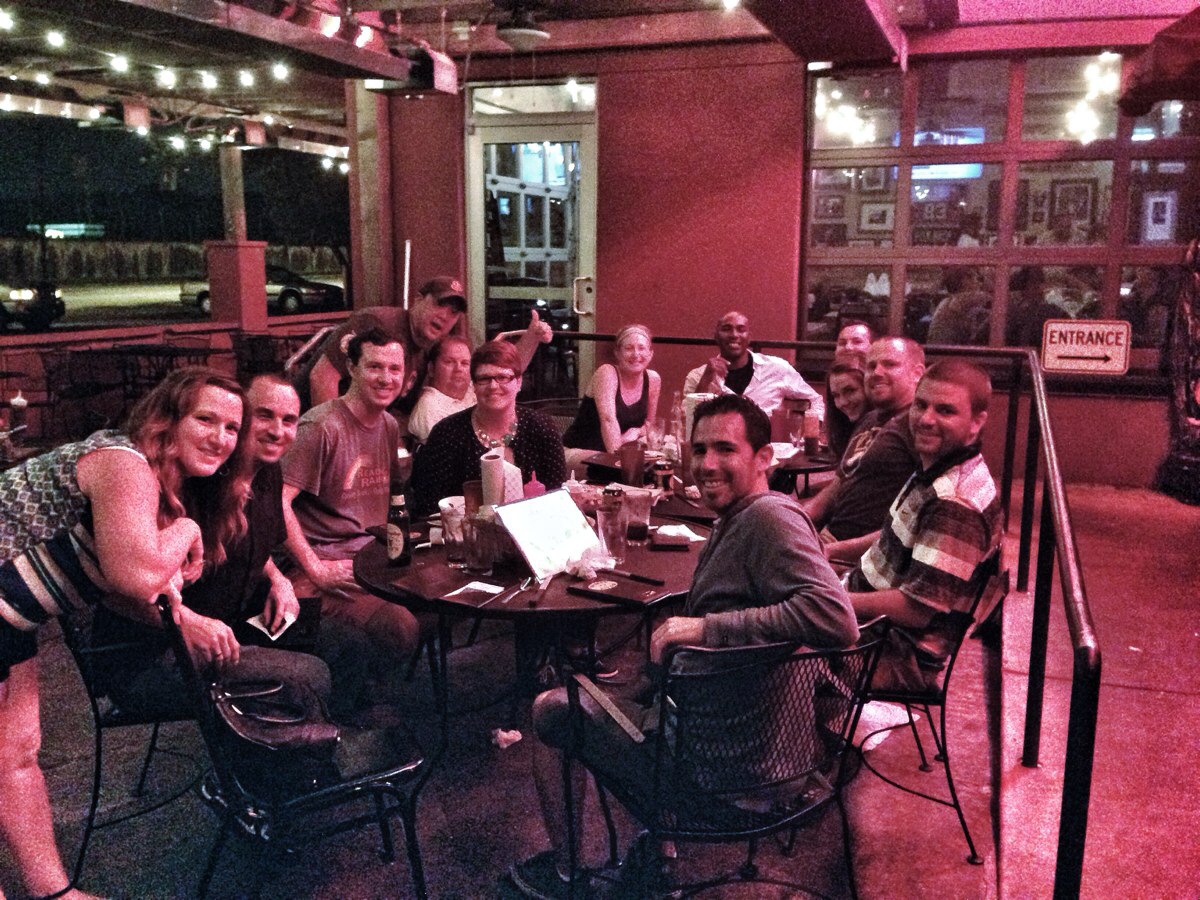 At ISTE 14, I spent a lot of time doing two things: presenting and hanging out with extraordinary educators. I presented six times at this conference! That meant that most of time at the conference was spent in sessions – but as a presenter! I was one week away from starting my new job as director of technology at Hillbrook School, and I was desperate to connect with other tech directors and develop skills for that new role. But I didn’t have time during the conference. By necessity, I booked time to connect with people early in the morning, during dinnertime, and later in the evening. This led to one of the most exhausting, yet memorable events of my life.

I was introduced to Fox Bros. Bar-B-Q on Sunday night. Good food with good people leads to good conversations. In the pre-Lyft era, this restaurant took a while to get to, leading to even more fantastic conversations. I learned a lot about good BBQ that night, and (more importantly?) learned a lot about being a better presenter. I was schooled in tips, tricks, strategies, ways to introduce complex topics and more. I am a better presenter because of that night.

ISTE 15: Make the thing you want to see in education.

ISTE 15 was in Philly; the very first Edcamp was in Philly. Was this going to be an epic conference? Yes, it would be.

Edcamp completely shifted how I viewed both professional learning and my relationship with ISTE, both in very good ways.

I’ve podcasted and written about the power of Edcamps a lot, and with good reason. They introduced me to the power of a participant-driven conference – an event with sessions built the same day as the conference. It was always timely (by design), but was different in a lot of ways to big conferences like … well, like the ISTE conference. I spent a lot of time with fellow Edcamp organizers talking about how an unconference might fit into a traditional conference and discussing how we could take the greatest parts of Edcamps and bring them to our schools and our classrooms.

We all saw a need in our community to empower teacher voice, and we did something about it. We all made a thing. And as an educator, making a thing for other educators is absolutely transformative. In a similar way, the way I looked at ISTE Conferences also shifted. It became less about “they” and more about “we.” I realized the agency I had as a member of this incredible organization. It was then that I took ownership of how I could contribute to the conference and how my presentations and my engagement at the conference could shape it. 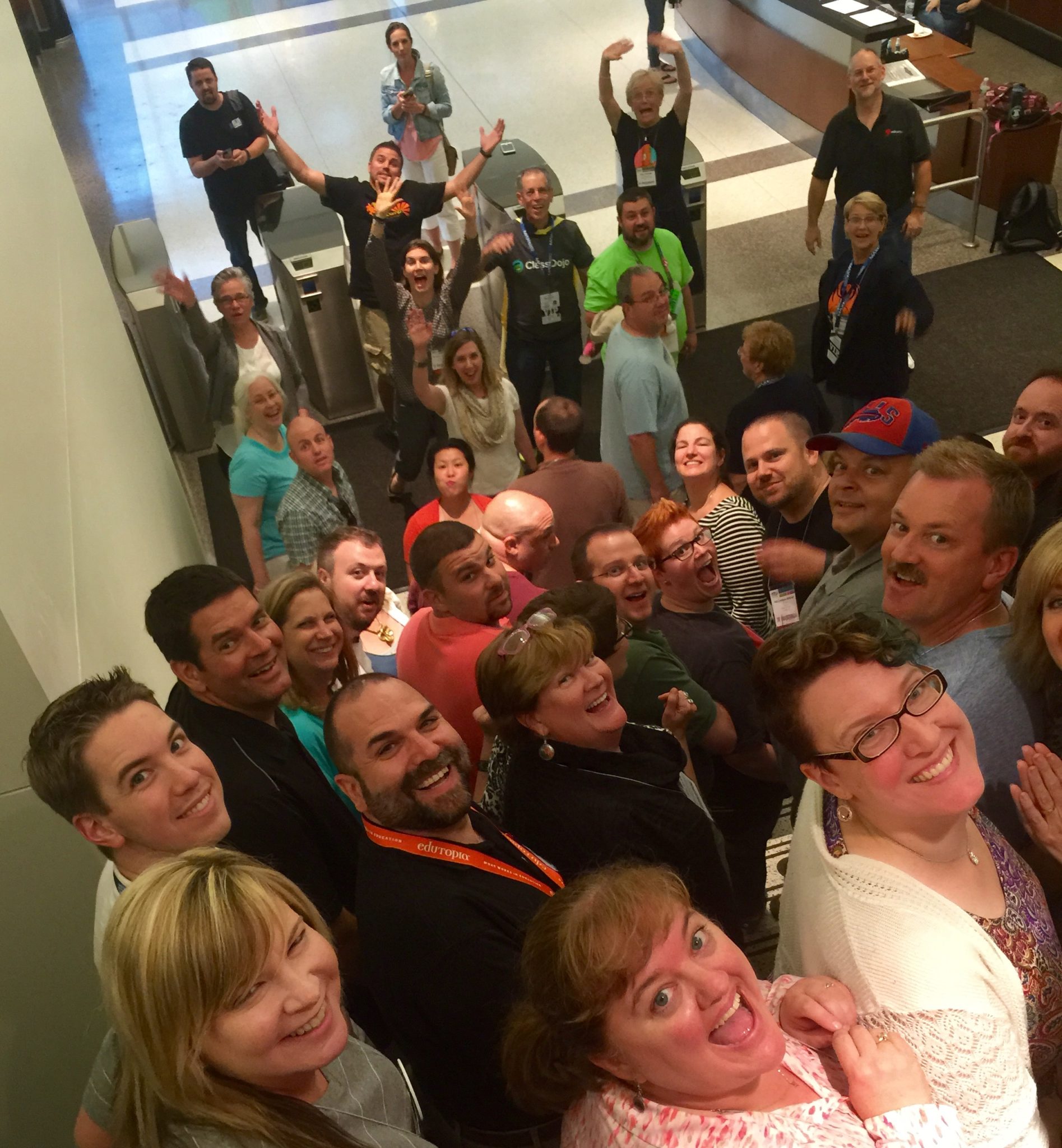 ISTE Ignite sessions: each presenter is given 20 slides that auto-advance every 20 seconds.

After seeing edtech friends do this high-wire presentation for a couple years, I finally applied to give an ISTE Ignite talk. My talk, I Think I Figured Out How to Use Snapchat as an Educator, was accepted, and I realized just how intimidating this style of presentation actually was. My blog post about how to give an Ignite talk goes into detail on this; let me just share here that it is A LOT of work, and requires an insane amount of rehearsal.
I had a run-through in the main theater/ballroom, where I practiced the first few slides. In the very, very big room. That was when I realized what I’d gotten myself into.  I was energized. (Terrified? Terrigized?) I can say that there is nothing like giving a timed talk in front of 1,500 of your closest friends. And for me, it was addicting. I fell in love with this high-risk, highly complex way of sharing an idea in a very short time.

That first Ignite talk taught me the importance of pushing myself as an educator and always trying a newer thing, a harder thing, a more interesting thing.

Let’s reimagine classrooms. We have the power to do it, so let’s do it.

What if classrooms looked more like studios? What if they were places students wanted to be, where they could find a problem, develop a craft and reach beyond themselves to make a difference in the world? At ISTE17, I gave my second Ignite talk Studios, Not Classrooms. This was the first big presentation I gave that was really informed by my work at Hillbrook School. At that point, we had spent four years looking deeply at classroom environments (spoiler alert: it’s about way more than just furniture), and how environment shapes behavior. In this Ignite talk, I pushed fellow educators to reimagine what classrooms could be.

Up until this point, most of my presentations were about a tool – a website, an app, a workflow – and how educators could use them to more effectively engage students. This talk was about challenging colleagues to think differently about what school fundamentally could be. It was about reimagining the institution of education. It was asking everyone to be Neo from The Matrix and shape their own worlds, ignoring the perceived “rules” of what schools and classrooms should be.

ISTE 18: Connect educators to each other.

ISTE18 started off with the ISTE Mentor program, a half day event when local educators learned about the conference, got a tour, met a mentor (that was me!), and then received complimentary registration to attend the conference. It’s an incredible program!

My mentee was Brandon Thornton, a (relatively) young special education teacher in Illinois. We talked about how we could engage in the conference, and talked about his goals for his time at the conference. He mentioned that he really just wanted to see Matt Miller; Matt’s book Ditch That Textbook really pushed Brandon’s thinking, and made him a better teacher. So, I discreetly took out my phone and DM’d Matt. He said he’d love to meet with Brandon.

I played Jenga and talked about the future of education at an Apple Distinguished Educator meetup. I knew some of my fellow ADEs, but met so many more. I was beginning to feel like I knew most of the humans that attend ISTE conferences. This was a good reminder that the conference was bigger than I could ever imagine, and that that is an incredibly valuable thing.

I had cheesesteaks (again!) at a CUE meetup. I’m super involved in CUE (ISTE’s California and Nevada affiliate), but tend to think of my CUE friends as people that are in California. (To be fair, they almost always are.) But suddenly, 80 CUE friends were having cheesesteaks together in Philadelphia. We ran a game at this lunch (and later throughout the conference) where we hid a golden egg, and gave prizes to the finders of the egg. It was so simple, yet so fun. And it was happening with my CUE friends at an ISTE conference.

Clearly, these groups don’t live in vacuum. I knew that. Really. But I had never quite seen how these organizations partnered, how they relied on each other, and how they complemented each other in really cool ways.

A version of this post was originally published on Bill Selak's blog. You can also hear Bill talk about ISTE conferences on his podcast.

Bill Selak (he/him) is director of technology at Hillbrook School, an independent JK-8 school in Los Gatos, California, that was recently selected as an Apple Distinguished School. He also teaches at Concordia University Irvine in the online M.A. Education in Educational Technology program. He is a recipient of the Kay L. Bitter Vision Award and the ISTE Emerging Leader Award and he's a Google Certified Innovator. He previously taught elementary music, kindergarten and second grade in Covina-Valley Unified School District.