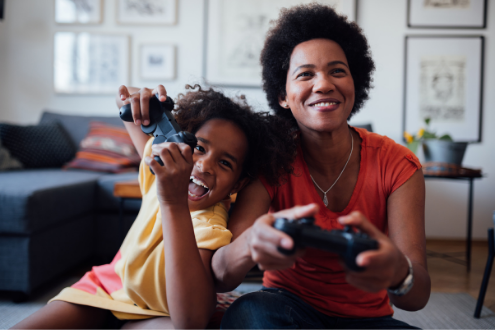 To flatten the curve when the COVID-19 pandemic hit, we were all encouraged to stay home as countries across the world shut down schools, businesses, churches and events. That’s why the World Health Organization (WHO) recommended we stay inside and play games instead, using the hashtag #PlayApartTogether.

And it worked. According to Nielsen Games Video Game Tracking, time spent gaming in the U.S. jumped 46% between March 2020 and June 2020. In addition to the increase in gaming hours, COVID-19 has accelerated growth in other video game areas. Here are three trends on gaming and how they impact educators.

In May 2020, the World Economic Forum predicted that the pandemic would lead to the normalization of esports. Although esports revenues declined in 2020 due to a lack of live events, new leagues sprouted up around the world. For example, NASCAR created the iRacing series, attracting over a million viewers to one event, after live races were canceled.

Beyond money and viewership, esports provide an opportunity for learning. To be successful at esports, a player must work with a team, practice, market themselves and continually research and come up with game strategies.

Those skills transfer to just about every job and career, said Chris Aviles, a middle school teacher and esports coach in New Jersey.

Esports, he says, can be integrated with larger district goals around STEM education, career training, community-building and inclusiveness. It’s also a way to set a school apart and provide an activity for students who are typically underserved.

“Your athletes aren’t the ones coming out for the esports team,” he said. “Your students who have autism and learning disabilities, your students who don't have any home-school connection or aren’t involved in clubs, these are the kids who come out. However you want to split this up, esports teams are some of the most meaningful investments that schools are making right now.”

The Grapevine Public Library in Texas received a $75,000 grant to create its own esports academy. Library Director Ruth Chiego says the academy will be a boost to job creation and program development for those who may have limited financial resources.

Most gamers are not teenagers. In fact, according to the Entertainment Software Association (ESA), the average age of a gamer is 34. Today’s millennial and Gen X parents grew up playing video games — and now they are playing with their children.

According to an ESA survey, 70% of parents say video games have a positive influence on their child’s life and two-thirds of them play video games at least once a week with their child. During the pandemic, the amount of game time between parents and children increased, which helped stem loneliness and increase socialization.

Video games can inspire curiosity in history and culture. For example, the popular pandemic PlayStation game The Ghost of Tsushima is set in 1274 during the first Mongol invasion of Japan. Themes of war, conquest and cultural clashes come up throughout the story. In addition to referencing books and articles on classroom topics, educators can reference a game.

Educators can leverage this trend of parent engagement through videogames to reinforce digital citizenship and media literacy education. Knowing that parents may be playing games at home with their children, educators can send home conversation prompts to encourage discussion. They can also use media examples from games, not just social media or the news, to discuss topics such as representations of women, violence and more.

Twitch, the video live streaming service, doubled its viewership in 2020. As reported in MSN, in the fourth quarter of 2020 there were 6.3 billion hours in the fourth quarter of 2020. But these are definitely not all video game streams. Twitch reported that “Just Chatting” was the most-frequently-watched category. Twitch became a replacement for in-person talk and you can find topics on anything, even education.

When teaching went remote, some teachers chose to livestream classes over Twitch , rather than using Zoom or their LMS. Educators can use Twitch plugins to track attendance, add emotes, and include closed captioning and even mini-games. The pandemic brought new viewers and tools to Twitch, many of whom are here to stay even then schools reopen and many pre-pandemic activities resume.

The COVID-19 pandemic affected so many parts of our lives, including video gaming. While our hours on Twitch streams or in our homes may decrease as pandemic measures lift, gaming will not go away. We can look at gaming and screen time with apprehension, or as an opportunity to better connect and educate our students.

Carrie Rogers-Whitehead is the founder of Digital Respons-Ability and the author of Digital Citizenship: Teaching Strategies and Practice from the Field and the recent title from publisher Taylor & Francis, Becoming a Digital Parent. She'll be presenting at ISTELive 21 on how to host a digital parenting event.

How To Start an Esports Club

Esports is a mammoth and growing ecosystem that includes game publishers, streaming platforms, products, leagues, tournaments and more, all of which add up to a $20-billion-a-year industry. It’s an engine that’s fueled by teenagers and young adults. In fact, more than…