10 ways to get started with 3D printing 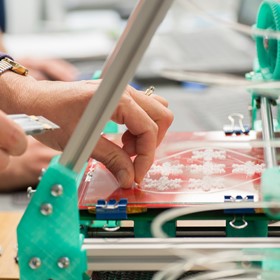 When I first watched a 3D printer in action, I went through a rapid progression of reactions:

As the maker movement has gained momentum and the price of 3D printers has continued to fall over the past year, sales have soared among makers and schools. Educators can't help but be intrigued and inspired. 3D printers, after all, are pretty cool. They put the power to create real-world things into the hands of just about anyone — even young students.

But are they more than just another passing fad? As we all know, coolness alone is not enough to make technology an effective learning and teaching tool. Can these machines really help students develop their creativity, problem solving and STEM skills? Will their use promote the kind of team building and collaboration that will help them in their future endeavors?

Your students will surely be transfixed, as I was, as they watch and use a 3D printer for the first time. But the technology's true potential can only be realized if creative teachers thoughtfully guide their students through the design process, making sure that the novelty does not overshadow the learning.

Think you're up to that task? Here are 10 ideas for jumping into the world of 3D printers and using this innovative technology for real learning.

Of course, that may not be the case for long. Recently I was in a Microsoft store. I stood and watched three preschoolers as they observed a 3D printer creating a yet-to-be-recognizable object. They were completely mesmerized, as if they were looking into a crystal ball.

Maureen Brown Yoder, Ed.D., is a professor of educational technology at Lesley University in Cambridge, Massachusetts. A former classroom teacher, she currently works with inservice educators and teaches an online course on emerging technologies. She coined the term electronic constructivism and has written extensively on how to thoughtfully and creatively integrate emerging technologies into existing curricula.

As more informal learning organizations begin to offer programs that engage kids and foster real-world skills, many are expanding their offerings to include STEM activities and makerspaces.

The impulse to create is one of the most basic human drives. As far back as the Stone Age, we were using materials in our environment to fashion tools for solving the problems we encountered. And in the millions of years since then, we have never stopped creating. In fact, the rise of…

Step into a school makerspace, and you might expect to see science students programming robots, tinkering with circuits or accomplishing miniature feats of engineering.

While there’s plenty of that going on in Harpeth Hall’s Design Den, you’re just as likely to see English students…

© International Society for Technology in Education (ISTE), All Rights Reserved