23 Resources for Bringing AR and VR to the Classroom 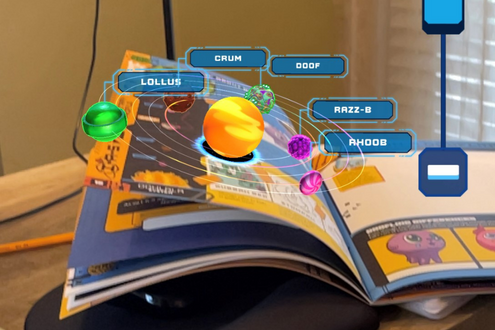 You don’t need a VR headset to experience virtual reality. That’s the message that AR/VR guru Jaime Donally wants all educators to understand.

“Headsets present barriers. I focus on implementation,” says Donally, author The Immersive Classroom: Create Customized Learning Experiences with AR/VR. “There’s a place for VR, but it needs to be more specific and thought through or VR becomes a road block.”

As both augmented and virtual reality become more accessible on ordinary devices, Donally hopes more educators will explore the potential of these tools. Augmented reality (AR) layers and enhances reality. Think using your phone camera to translate a foreign language. Virtual reality (VR) creates its own reality that is disconnected from the real world. It’s possible to use VR, such as a 360-degree view on a phone, without using a headset.

For use in a classroom, Donally recommends setting clear goals and objectives and leveraging whatever technology is already available. One of her favorite activities requires using only one headset for an entire class. The activity uses 3D Creation to play a Pictionary game for math where students build an object in space. It's hard for many students to visualize a 3D object by drawing it on paper. In this case, technology helps students deepen their understanding.

“This is an example of an activity that doesn’t just capture attention or content but bridges gaps we have in the classroom that would be impossible without this technology,” Donally says.

While AR and VR are changing quickly, Donally recommends the resources below for use in the classroom.

Download the Assemblr Studio app onto computers. The 3D library includes many animated objects and educational items. It’s simple, easy to use, and has many options.

Tools and resources that allow students to create in 3D, learn to code, and connect with curriculum on a new level.

This app lets kids create their own 3D AR interactive drawings. Print out the  Magic Worksheet, write a story, and see it animated with the app.

Donally calls this “one of the most curriculum-rich AR/VR resources for early elementary students.” The AR and VR books let students interact with activities and come with worksheets and a curriculum that help educators align with content standards.

One of the easiest platforms to use, this computer app lets users add a short video on top of a trigger image.

Students can use this platform to make 3D and AR presentations. Includes sharing and collaboration, as well as embedded viewing.

The Halo AR mobile app is easy to use. Students can capture or upload a picture and then layer AR on top of it.

Donally recommends the Merge Headsets for those ready to invest. She says they survive an 8th-grade drop test.

The kit asks kids to solve a problem by following AR instructions to build a real item. “While the written content will require teacher support, the guided visuals and immersive technology experience support our youngest learners to make powerful connections with the learning objective,” says Donally.

The MERGE CUBE is a soft black cube that utilizes AR apps to teach young students about the human body age-appropriately.

The popular game has an education version that allows students to create their own virtual worlds, such as Jamestown or Fort Clatsop.

Nearpod is one of education’s most popular platforms for formative assessments. Interactive slides and videos let The free-for-teachers VR-based curriculum can be used on students' devices, in-person or virtually, and for front-of-classroom instruction.

Bring coloring to life with augmented reality content in biology, geometry, and the solar system. Subscription service starts at $10.

This platform lets students or teachers create and describe a VR field trip or virtual tour using resources from the site. The experiences are available in a full-screen mode that doesn’t require a headset.

This costly subscription is worthwhile for anatomy teachers. The iOS app lets students dissect an AR cadaver, watch muscle movements, and learn about all the body systems.

This scanning app is easy to use. AR View allows you to beam your scanned object back into the real world and animate it.

Use this iOS app to record a short film using AR. Students can “Push record and animate the characters with emotions and gestures while walking around the scene for the best shot,” says Donally.

Donally says this is one of my favorite tools because it uses WebXR to make the magic happen in the browser instead of an app, making the experience run faster.

This AR storytelling app for littles includes readers in the story. The visuals come to life around the reader, and students can help the characters.

Jennifer Snelling enjoys talking to and writing about educators doing amazing work with technology in classrooms. Follow her @JdsnellJennifer. This is an updated version of an article that was published on January 4, 2017.

Looking for a Google Expeditions Replacement? Check Out These 2 AR/VR Tools

If you haven’t dipped your toe into the world of augmented reality (AR) or virtual reality (VR), you and your students are missing out! AR and VR experiences can support and enhance learning in all…

One of my first experiences with augmented reality came from the Aurasma app, later known as HP Reveal. The mobile app layered 3D objects and videos on top of a high contrast image. My mind was blown after I viewed a 3D object jump off an image on the paper. I can’t recall anything else I…