3 unplugged activities for teaching about AI 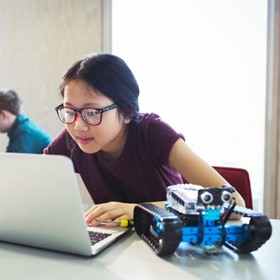 Today’s students will live and work side by side with artificial intelligence. But will they understand it?

What kids know about AI often comes from movies like Wall-E and Big Hero 6, in which they see robots thinking, feeling and learning autonomously. But while science fiction has made some astute predictions about technology, it has also bred many public misconceptions about what machines are capable of.

Now that AI has arrived, students need to explore the realities of both its capabilities and its limitations if they want to use it effectively in the workplace — and they’ll need a firm grasp of how it works if they’re going to steer its development in the future.

“The next frontier is artificial intelligence, which will completely change not only how we interact with and learn about technology, but also how we teach programming,” says MIT graduate research assistant Stefania Druga.

“Providing kids with the tools and access to AI education will create a generation who are not simply passive consumers of this technology but, rather, active creators and shapers of its future.”

Watch the video below to find out how AI can help your students solve some of the world's biggest problems.


Making room in an already overcrowded curriculum to teach AI can be difficult for teachers, especially if they don’t have access to tech tools like chatbot creators or virtual personal assistants in the classroom. Fortunately, you don’t need any devices to show kids how AI works. Here are three unplugged activities you can do in any classroom to demonstrate the concepts behind AI:

1. The intelligent piece of paper

Artificial intelligence is a bit of a misnomer, scientists admit. True AI is still at least a decade off; what we’re seeing now may be better described as “augmented intelligence,” or the use of machines to augment what humans are capable of. Instead of pre-programming a computer to perform a specific task, we’re now able to feed it data and let it discover patterns and learn tasks on its own. In other words, we have machines that can make predictions — and get better at them — based on a library of data. That’s still a far cry from a robot that can think for itself.

This activity uses a game of Tic Tac Toe to demonstrate the difference between human and artificial intelligence. The game pits a human player against a piece of paper “pre-programmed” with instructions. As students watch the paper respond to each move, they discover how, with the right programming, a computer can adapt to human responses and appear to equal, or even best, a human opponent.

Rather than attempt to measure a computer’s ability to think, mathematician Alan Turing argued that a more practical way to assess a machine’s intelligence is to test its ability to mimic human behavior. To pass the Turing test, a machine must be able to fool a human into thinking it is also human.

Students can act out their own version of the Turing test using a list of questions and answers. You’ll need three volunteers. One will act as the computer, responding to questions using only the answers provided, while another will act as the human, answering questions as they see fit; both should be located outside the classroom. The third volunteer will convey their answers back to the class, which must then determine which is the human and which is the computer.

Facial recognition is just one example of what machine learning can achieve — and it’s one of the more controversial. Drawing from a vast pool of digital images, computers can now identify individuals based on facial patterns. In China, it’s already being used to identify suspects and even auto-text tickets to jaywalkers. While the ethical implications of such technology are enormous, it also makes a great entry point for teaching kids how machine learning works.

Since a computer can’t “see” a photo the way a human does, how can it extract meaningful data from one photo and compare it with data from another? In this activity, students simulate a facial recognition algorithm by breaking down images of Disney characters into a list of features they can then use to glean the identity of a mystery character.

AI may be a revolutionary technology, but you don’t need any apps or devices to teach its basic concepts. Want more tech-free activities for teaching computer science and AI? Visit CSUnplugged.org.

This is an updated version of a post that originally published on Oct. 18, 2018.