4 benefits of bringing pair programming to the classroom 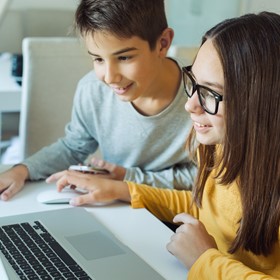 Pair programming is a software development technique that puts two people at one workstation where they team up to do what a single programmer would typically do – but with improved outcomes because the pairing leads to fewer defects, optimized thinking, knowledge sharing and increased information flow between the partners.

The joke in tech circles is that the two developers are “handcuffed” to each other until the project is completed. In reality, the programmers take on different roles while paired up. One person, the “driver,” writers code while the “navigator” reviews the code as it’s written.

Tara Linney, edtech coach at the Singapore American School, compares the approach to taking a taxi in Singapore where the GPS is sketchy and cooperation is required to get to your destination.

“I don’t give the driver an address,” Linney says. “I give him landmarks and tell him which way to go and I correct him as he drives. So one person is the voice who navigates and helps troubleshoot and the other person, the driver, does the work.”

She says the approach helps programmers debug coding because it allows for problem-solving with new eyes.

In the classroom, the paired approach leads to authentic learning. “It empowers students to communicate and collaborate and fosters critical thinking because the teacher is part of the background, a facilitator,” Linney says. It also addresses a number of ISTE Standards for Students, including Creative Communicator, Computational Thinker and Innovative Designer.

Linney pairs boys up with girls and matches students with similar traits rather than ability levels – like putting talkative students together or quiet students together – so both students have an equal opportunity to have a voice.

That’s when the magic happens and students benefit from gender equity and social-emotional learning, including:

When students have an interaction with someone who is different from them,it presents an opportunity to develop empathy and gain new perspectives. Stick with the people just like you or who you’re already comfortable with and social-emotional learning stagnates.

Linney says girls tend to focus on purpose when creating, while boys might focus on fun – think game creation. Create mixed-gender teams and boys experience the purpose aspect– how and why things work and making a difference in the world – and discover a different way of thinking.

What the world needs now is fixers and problem-solvers, but solutions don’t come from getting it right the first time or being perfect. Pair programming sets up a situation where one student sees another student’s approach and views the problem from a different angle.

Pairing girls and boys enables girls, who tend to home in on the end product,  to focus on individual steps and solving the problems that may arise during creation, making the idea of iteration more comfortable.

ISTE members interested in gathering more techniques to drive equity and get girls coding can watch the recording of the ISTE Professional Learning Series webinar “Girls Can Code.”