Teaching Digital Literacy in an Era of Skepticism 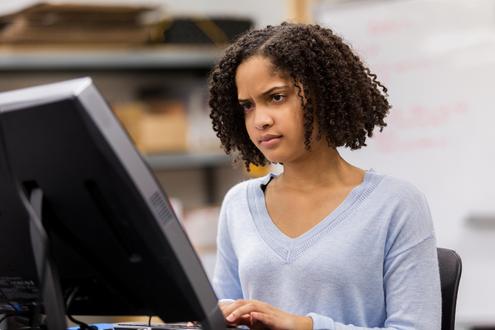 Scrolling the internet lately can be like stepping through the looking glass, where right is left and up is down. Fabricated news stories are going viral. Elected officials are declaring legitimate news stories fake.

Helping students separate fact from fiction is no longer a matter of pointing them toward credible news sources like PBS, the New York Times, The Guardian and other respected global media outlets. That’s because credulity isn’t the issue anymore, says philosophy professor Michael Lynch.

Or at least, it’s not the whole issue, he says. The wider problem is that fake news is causing people to disbelieve real things.

“Fake news, and the proliferation of raw opinion that passes for news, is creating confusion, punching holes in what is true, causing a kind of fun-house effect that leaves the reader doubting everything, including real news,” says New York Times writer Sabrina Tavernise.

Traditional news outlets are losing credibility among students, whose trust in the national news media has dropped 13 percent since 2010. One study found that teens and young adults are “widely skeptical” of the news and concerned that even the national media are inaccurate or biased.

“The default used to be ‘I believe’ and is shifting to ‘I don’t believe anything,’ ” says medial literacy expert Erik Palmer. “When our top elected officials describe news from our most credentialed media outlets as fake, all sources of information are undermined.”

It’s not just students who are confused. Two in three U.S. adults say fabricated news stories cause a lot of confusion over the basic facts of current events, and trust in the media is at an all-time low. Even educators and academics with multiple degrees admit they have a hard time recognizing fake news.

“How much harder, then, would it be for a 10-year-old, or even a 17-year-old high school senior, to identify whether or not a website is credible or factually accurate?” says instructional technology specialist Nancy Watson.

It’s no wonder three in four students can’t tell the difference between real and fake news on social media.

Fake news itself is nothing new, of course, and it certainly predates the internet. What is new, however, is today’s hyper partisan political climate in which decision makers cast doubt on traditional news sources they perceive as hostile to their agenda.

Many educators agree that this climate, “in which elected leaders and senior government officials seem to lie with impunity, makes the teaching of digital and media literacy even more challenging,” says edtech writer Dennis Pierce.

The ISTE Standards encourage students to be able to evaluate the accuracy, perspective, credibility and relevance of information and the media. To achieve that goal in this new era of skepticism, today’s media literacy programs should address the following concepts"

1. Fact and fiction are on a continuum.

Telling real news from fake isn’t necessarily an either-or proposition. There are many shades of gray between, and kids can take a long time to grasp the subtleties. Whether students lean toward credulity or skepticism, the key is to get them in the habit of questioning their immediate reaction and checking with multiple sources to get the whole story.

Public conversation about the media often conflates bias with falsehood, but students need to understand that they’re two different things. For example, a news outlet can publish images that portray someone in either a flattering or unflattering light. “Both images are true — the photos exist,” Palmer says. “Choosing one image over the other displays your bias.

If a story seems too outrageous to believe, it’s wise to be skeptical. On the other hand, if it’s so outrageous students want to believe it, that’s also a red flag. “How we feel about the content we consume can tell us a lot about whether or not it’s been designed to manipulate us," says Darren Hudgins, co-author of Fact vs. Fiction: Teaching Critical Thinking Skills in the Age of Fake News. "We should all be suspicious of videos that trigger swift, passionate and often negative responses, such as fear or outrage.”

All the confusion over fake versus real news makes teaching media literacy more complex, but it also makes it more necessary than ever.

“Digital literacy is a crucial set of skills and attitudes that are necessary now more than ever before to impart to today’s learners,” Watson says. “And it takes a huge amount of pretty sophisticated critical thinking, digital skills and an understanding of our online behavior to even start to understand how complex the action of website evaluation is.”

Nicole Krueger is a freelance writer and journalist with a passion for finding out what makes learners tick. This is an updated version of a post that originally published on Nov. 29, 2017.