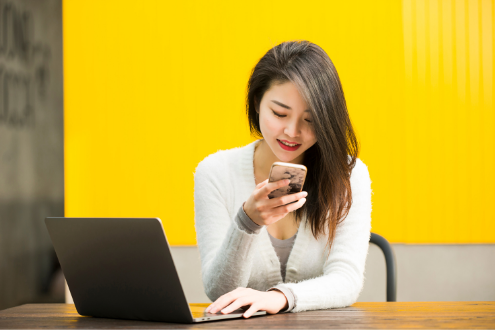 Our job as digital citizens requires more than just being informed. We must also be vigilant about verifying information before posting it online. Being able to evaluate the acurracy, perspective and validity of digital media and social posts is one of the five competencies of DigCitCommit, an initiative designed to prepare students to stay safe, solve problems and become a force for good.

While not a fact-checking site, AllSides curates stories from right, center and left-leaning media so that readers can easily compare how bias influences reporting on each topic.

This nonpartisan, nonprofit project of the Annenberg Public Policy Center of the University of Pennsylvania monitors the factual accuracy of what is said by U.S. political players, including politicians, TV ads, debates, interviews and news releases.

This nonprofit and self-described liberal-leaning research center monitors and corrects conservative misinformation in the media.

This nonpartisan website where Internet users can quickly and easily get information about eRumors, fake news, disinformation, warnings, offers, requests for help, myths, hoaxes, virus warnings, and humorous or inspirational stories that are circulated by email.

This nonpartisan, independent and nonprofit website run by the Center for Responsive Politics tracks how much and where candidates get their money.

This Pulitzer Prize winning website rates the accuracy of claims by elected officials. Run by editors and reporters from the independent newspaper Tampa Bay Times, Politicfact features the Truth-O-Meter that rates statements as “True,” “Mostly True,” “Half True,” “False,” and “Pants on Fire.”

This independent, nonprofit newsroom has won several Pulitzer Prizes, including the 2016 Prize for Explanatory Reporting. ProPublica produces investigative journalism in the public interest.

This independent, nonpartisan website run by professional researcher and writer David Mikkelson researches urban legends and other rumors. It is often the first to set the facts straight on wild fake news claims.

Although the Washington Post has a left-center bias, its checks are excellent and sourced. The bias shows up because they fact check conservative claims more than liberal ones.

Jennifer Snelling is a freelance writer based in Eugene, Oregon, and mom to two digital natives. This is an updated version of a post that originally published April 18, 2017.