Use escape rooms to deepen learning 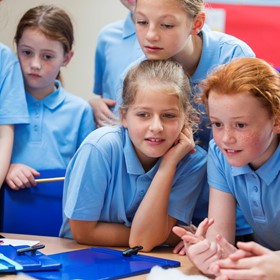 One of the most popular activities for kids’ birthday parties and couples’ nights out, escape rooms also offer a way to instill deep learning.

For the uninitiated, escape room participants are locked in a room and challenged to break out by solving puzzles or completing challenges. The experience combines the elements of theater, game play and special effects.

The excitement behind this immersive entertainment trend isn’t lost on Mary Howard, a sixth grade teacher at Grand Island Central School District in Grand Island, New York. In addition to the fun factor, Howard quickly tapped into the engagement this form of mixed reality could bring to her classroom.

Sure, escape rooms are action-packed and trendy, but they also inspire creative learning opportunities.

“It’s the content that deepens learning,” Howard says. “I could give them a textbook and tell them to memorize information or take notes, but the experiential learning and project-based learning that is part of escape rooms ignites students. They become critical thinkers, they want to seek out more information and it makes the classroom a vibrant place.”

The attraction for students is based in four principles Howard says make escape rooms irresistible:

Howard has combined all of these principles into standards-based mixed-reality lessons she calls phygitals – environments where physical and digital objects co-exist or converge. Here are a few of her favorites:

Students select a theme they’re interested in as the theme of their escape room. Last year, Howard’s students designed Irish Potato Famine Escapes and Batman Cave Escapes, but any theme that students are interested in works. Students then write a paragraph summarizing the theme of their escape and a mystery letter with blank spaces to be “solved.”

Then they share their escape room challenge with classmates who try to solve them.

Create a crime scene right in the classroom that includes a narrative and a mystery to be solved. Students must solve the puzzle of how the crime happened from evidence provided in the room. Howard calls this lesson the classic example of using escape rooms to give students the opportunity to evaluate, think critically and problem-solve.

Create a classroom scavenger hunt that combines QR codes with context clues. In one of Howard’s favorites, students scan a QR code and read a question, filling in their answer from a word bank. Marked letters on an answer sheet lead students to a series of envelopes and more codes. Correct answers net the letters needed to solve a riddle. Howard also recommends creating scavenger hunts with klikaklu or GooseChase.

ISTE members looking for lessons and tools to bring immersive learning games to their classrooms can watch the recorded webinar “Student Engagement: An Open-and-Shut Case,"

4 Ways to Personalize Reading for All Learners

Mar/17/2018
Digital Citizenship, Gamification
Weigh in on the ISTE Standards for Administrators

“Leaders get people moving. They energize and mobilize. They take people and organizations to places they have never…