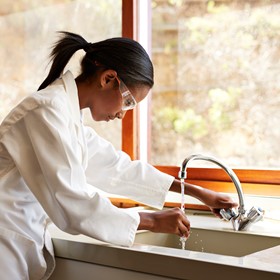 When seventh grader Gitanjali Rao heard about the drinking water crisis in Flint, Michigan, she was troubled to learn that 5,000 U.S. water systems have problems with lead contamination.

Living in a suburb of Denver, where thousands of homes still receive water through lead pipes, she’s watched her parents check for lead in their home’s tap water using simple but inaccurate test strips. The only reliable alternative, she says, was to send a sample to the Environmental Protection Agency for expensive and time-consuming analysis.

She decided families need a better way to ensure their drinking water is safe. So she invented one.

“I wanted to do something to change this, not only for my parents, but for the residents of Flint and places like Flint around the world,” she says.

She used an online simulator to experiment with nanotube technology and a 3D printer to build the casing for her device, which incorporates an Arduino processor and carbon nanotubes for detecting lead as well as a Bluetooth extension to send the results to a smartphone app. The invention won her a $25,000 prize from the Discovery Education 3M Young Scientist Challenge, with which she plans to continue developing her device for market while also donating to some of her favorite nonprofits.

Gitanjali is an example of what today’s digital citizens should look like: informed about the world, concerned about the plight of others and empowered by technology to do something about it. The new digital citizenship asks students to become digital agents who leverage technology to help solve the world’s problems — and project-based learning can serve as a powerful vehicle for getting them there.

Since project-based learning revolves around solving a problem or answering a driving question, it’s a natural fit for teaching the kind of digital citizenship that transforms students from consumers into agents for change. From coding an app to launching an online awareness campaign to raising money through a crowd-funding campaign, technology offers endless entry points for tackling any problem. By guiding students to apply these tools to real-world problems, teachers can make virtually any classroom project double as a digital citizenship lesson.

Every good project starts with a problem or question. Since there’s no shortage of real problems that need solving, the key is to help students cultivate an eye for spotting them. That means getting in the habit of staying informed about what’s happening, both in their communities and in the world at large, and discovering which issues they’re most passionate about. This is also a good time to tie in discussions about how to critically evaluate online sources of information.

At Holy Family Academy, a student-centered Catholic high school in Pittsburgh, Pennsylvania, teens explore the social justice issues affecting their underserved communities using each classroom subject as a different lens. Not only are students encouraged to openly discuss controversial topics, such as racial hatred and police brutality, but they’re given free reign to devise their own driving questions for project-based learning.

“They could read about it in book, or we can give students the space and time to create a program or project,” says Lisa Abel-Palmieri, head of school and chief learning officer.  “This way, they’re working on projects they’re passionate about while learning the core subjects.”

The most powerful projects often stem from problems or struggles students are facing in their own lives. As they start researching potential solutions and discovering that other people share their struggles, they develop empathy along with the realization that the answers to their own problems can also be helpful to others.

“It doesn’t have to a global problem,” says Angela Maiers, founder of the Genius Hour and Choose2Matter movements. “It just needs to be real and meaningful. When you’re making progress on something meaningful, you’re making a difference in world.”

Once students find a problem they’re passionate about, the next step is to figure out an achievable approach to solving it. This often means combating deeply embedded beliefs that students are too young to do anything worthwhile and that real-world problems are best left to adults.

“We insult the intelligence of kids when we don’t ask them to solve real problems,” says Maiers, whose work with Genius Hour has taught her just how much potential students have to change the world. “These are real kids self-organizing around real problems and moving forward change in ways that adults would never, ever suggest or be able to do. To see the kinds of problems these kids tackle is profound. They’re solving not only real problems, but some of our most wicked problems.”

Technology gives today’s students unprecedented power to affect the world around them. Many simply haven’t realized their own ability to make an impact. Working as guides, teachers can help students build a sense of efficacy while pointing them toward different tools that can help them solve problems in innovative ways. Introducing online collaborative tools where students can seek the input of peers or experts in the field, for example, provides alternative avenues for solving a problem while also building digital citizenship skills such as online communication and collaboration.

As students implement and share their solutions with others — whether that involves making a video tutorial, programming an app or building a device — they learn valuable lessons about managing their online property within the permanent digital world. The sharing part of the project is also critical in developing awareness of their own digital agency. When they see their work making a difference in the real world, they become more confident in their ability to tackle real-world problems.

A well-designed project can hit almost every digital citizenship standard while also meeting classroom learning objectives. Plus, it helps transform students into the potent digital agents the world needs them to be.

“When you can help kids see the impact they can have to solve a problem in their own little corner of the world, it’s an opportunity to learn something. It’s an opportunity to make something good happen,” says Dana McCauley, principal of Crellin Elementary School in Maryland. “That gives them that sense of belonging and a sense of being a part of something bigger. ‘Here’s an issue, here’s a problem, and I'm going to lend my part to that. Even I, as a 10-year-old, have something to add to that.’ ”