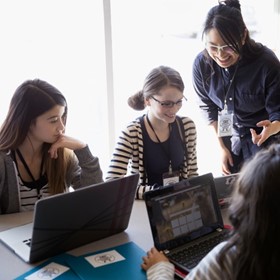 When Ben Churchill rejected his district’s textbook adoption process in favor of using open licensed resources, he got a little excited. Instead of spending thousands of dollars on published instructional materials, he watched his teachers come alive as they created — and shared — their own curricula.

In the euphoria, one of his co-workers heard him vow never to buy another traditionally published textbook again.

“I don’t remember saying that, but it’s very possible that I got carried away in a fit of optimism,” says the superintendent of Carlsbad Unified School District in California.

Two years into using and creating open education resources (OER), Churchill is now convinced there’s room in schools for both traditional textbooks and open licensed materials, which are free for anyone to use, modify and share. But it’s not unusual for educators who are just getting their feet wet with OER to get caught up in an either-or mindset.

That’s not the only mistake educators make when using open licensed resources. As more schools and districts join the fledgling movement to make high-quality instructional materials freely available to all, they’re increasingly discovering the truth behind several common myths about OER.

Open education resources are still in their infancy, and some educators describe the landscape as a Wild West. Unlike textbooks, OER don’t come with any quality guarantees. It’s often impossible to tell who created or modified a resource or when it was last updated. But while there are plenty of low-quality free materials available, there are also some great ones.

Keep in mind that the first OER officially released into the public domain came from MIT in 2001, when the university published nearly all of its coursework online for free. Since then, other schools, cities and states have followed suit.

The New York Department of Education spent millions in grant money to create and publish its own openly licensed curricula. Educators from around the world use open materials developed by Mountain Heights Academy in Utah because they’re more rigorous than many other resources. There are plenty of gems like these out there; it just takes time and a meticulous vetting process to dig them up.

The point isn’t to choose just one or the other. Rather, the goal is to create a more open, flexible curriculum that allows teachers to select the best possible resource for each situation.

Textbook costs have skyrocketed at four times the rate of inflation over the past decade. Altogether, districts spend $8 billion a year on instructional materials, averaging about $250 per student. Since OER are, by nature, free to use, that means educators can chuck their textbooks and pocket the money instead. Right?

Actually, OER aren’t as free as you might think. While there are plenty of high-quality open resources online, schools and districts still need to pay teachers to curate, adapt and customize them to local standards. Adapting curricular materials also requires instructional design skills, which means teachers who are used to relying heavily on publisher content may need additional training to use OER effectively.

“Don’t be too quick to think you’re going to save money by going to OER,” Churchill says. “It’s not an overall budget savings for us. We’re spending the same amount of money, just in different ways.”

Most districts end up reinvesting their savings into teachers. Liberty Public Schools in Missouri, for example, spends the money on professional learning — and considers it well spent.

“Our issue isn’t the money,” says curriculum director Jeanette Westfall. “Our issue is: Is this the very best we can give our kids? Is it making our teachers stronger or weaker?”

Paying teachers to develop curricular materials can seem risky, especially if they don’t have formal instructional design credentials. When Colonial School District in Philadelphia started creating its own OER, the content teachers came up with wasn’t any better than the instructional materials they’d been using — at first, says director of schools Pete Leida.

“We were worried about the quality of materials,” he says. “But it’s evolving. It’s taken a lot of time and a lot of vetting.”

When teachers aren’t used to flexing their instructional design muscles, they’re bound to be a bit rusty. But they’re also experts in their content areas, and they know what their students will connect to, which is why many leaders believe they’re ultimately the best people to create curricular materials for students.

“There’s no one more capable of creating content for your students than the teachers who are with them every day,” says Molly Yowell, an English teacher and digital content coordinator for the Indiana Department of Education’s Office of e-learning. “OER open up all these doors to best practices for our kids.”

Educators who are new to OER have their work cut out for them. Finding, vetting and adapting them isn’t easy, especially since there are so many misconceptions out there. But those who have made the transition say it’s worth it.

Before COVID-19 put schools in lockdown, teachers at Gwinnett County School District in Georgia were reimagining their class field trips.

As students return to the classroom, addressing instructional time lost to COVID-19 may be one of educators’ greatest challenges this new school year. Although students have made a range of…