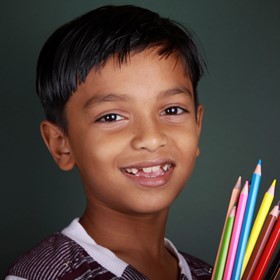 Few stories have the power to motivate like Pencils of Promise founder Adam Braun’s journey to launch his nonprofit organization.

Just knowing that he was able to parlay a $25 deposit into more than 300 new schools serving 30,000 students across the globe in five years is enough to inspire even the most jaded among us. But there was much more that educators could take away from his EdTekTalk at ISTE 2015.

In fact, Braun’s talk was chock-full of wisdom packaged in easily grasped nuggets. For example, he echoed ISTE 2015 keynoter Josh Stumpenhorst’s counsel that “true self-discovery begins where your comfort zone ends.” And he advised educators to “change your words to change your worth.”

Listen between the lines in the video below, and you’ll glean even more advice and ideas you can put into practice right now in your classroom and career.

Here are four of the most salient messages from Braun’s EdTekTalk:

Braun’s leap of faith to leave his comfort zone required leaving everything behind — Brown University, his role on the basketball team, his girlfriend — to join the university’s Semester at Sea. As it turned out, that trip changed his life. In India, he famously ran into a beggar boy on the street who told him that the one thing he wanted in the world was a pencil. The magic didn’t happen because Braun was in another country, though. It happened because he had room to ponder the “what if” and explore his emotions after clearing his head of all expectations, assumptions and routine for a time.

Braun realized that the child’s request for a pencil wasn’t about truly wanting lead wrapped in wood with an eraser on the end. “He lit up,” Braun remembers. “Children have a profound honesty and wisdom. That pencil was a symbol to self-education, to explore, to be creative.” That’s why Pencils of Promise doesn’t exist merely to put supplies in underprivileged students’ hands. It is exploring new ways to teach that include letting children roam about the classroom and inviting them to teach themselves and their peers.

3. You don’t have to sacrifice who you are to have an impact.

Right up to the moment when Braun opened the bank account for Pencils of Promise on Oct. 1, 2008, he was known as the guy who was crazy about numbers, Wall Street and competition. His position at Bain, consulting with Fortune 1000 companies, was the natural outcome for a kid who had been thrilled to work for a hedge fund at age 16. Today, he applies this business acumen to the education world.

4. Gratitude is the true motivation that moves mountains.

Big dreams start with small, unreasonable acts, according to Braun. Even before he opened a business account and asked his buddies to contribute as his birthday gift, Braun had set his mind on how he would honor his mother and grandmother. “Integrity is my mom’s favorite word,” he says.

While he was building a school with donated funds, he sent contributors a video of the youngest students giggling about their future to brighten the donor’s inboxes — and spawn more financial goodwill. When Pencils of Promise eventually launched a Kickstarter-style platform to allow groups to build their own schools, the principal of Crone Middle School on the south side of Chicago took a page from this book and pledged on behalf of his low-income students to raise $25,000. “The most powerful way I can get my students to value their education is to have them realize how fortunate they are to have access to education,” he told Braun. They recently opened a school in Ghana with Crone’s funds.

What great things can you do with the ordinary tools at your disposal? Get more inspiration and ideas at the world’s premier ed tech gathering of the minds. Register now for ISTE 2016 in Denver, Colorado.

How To Lead a School District in a Crisis