Create a culture of innovation using patents in the science classroom 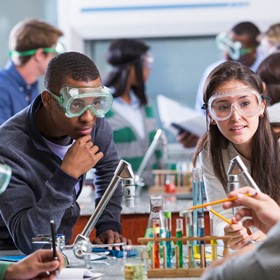 Policy makers, educators, entrepreneurs and even President Obama are pointing out what is becoming more obvious every day: STEM education is critical to success in the digital age, both as an educational imperative and an economic necessity. But as districts adopt their STEM curricula, it is important they understand that how educators teach STEM subjects is just as important as what topics they cover. It's necessary to consider how best to meet both content and ISTE standards.

Recently, Ben was charged with developing a relevant and meaningful high school engineering course. His goals, strongly grounded in the ISTE standards, were to create an environment where it was essential to communicate, collaborate, solve problems and be innovative. Achieving these goals had to begin with a shift in the culture of the classroom. Fostering an authentic learning environment begins with creating situations that encourage students to engage in the class with, as Tony Wagner would put it, passion and purpose.

A key ingredient in this culture is a patenting system that students use to get credit for their innovations while collaborating with classmates. The course, by design, is challenge-based and one in which students must work together to solve problems.

To give you an idea of what a patent system looks like in the science classroom, here's an example of one of the challenges Ben asks students to take on:

Students must create a two-stage mousetrap car using two different mousetraps. One must accelerate the car into a predefined area while the other has to launch a ping pong ball at a target that is neither parallel, nor perpendicular, to the car's movement. The most difficult element of this challenge is developing a method to trigger the second mousetrap after the car has already begun to move.

Naturally, some groups become very protective of their work to preserve the originality and creativity of their solution. So how can we encourage a culture of innovation and maintain positive collaboration? That's where the patenting system comes in. Modeled after an entrepreneurial system, Ben allows students to patent ideas throughout the process to reward innovation.

As students work in the construction and testing phase, they naturally progress toward key elements to solve the challenge. In the example above, it might be to use a long rod attached to the first mousetrap that will systemically trigger the second one. A group that develops this first can patent the idea to preserve their intellectual property, thus allowing them to be less protective of their work once the patent is issued.

The process for patenting an idea or product is pretty simple. The students complete a Google Doc that asks for the names of the group members, a description of their idea, and required drawings, pictures, or videos.

The teacher is the patent officer, unilaterally capable of approving or denying any patent. Sometimes the patent officer may ask for clarification or additional information necessary to show the originality of the student work. Using the Google Doc for this process allows teachers to monitor revision history for changes.

The patent officer can also comment directly on the document to foster a collaborative culture between teachers and students. Initially, it's normal to see groups submit frivolous patent applications. One way to combat this is to require a patent application deposit, in the form of points, of which a portion is forfeited if the patent is denied.

Learning from each other

Once the patent is awarded, the patent officer can post it online and as a printout in the classroom. Groups can make use of the idea but only at the cost of some of their own challenge project points. Those points " "paid" " by one group naturally get awarded to whom? You guessed it, the group that holds the patent earns those points. Permission to use each patented idea or product must be requested via email, being sure to a copy the patent officer to preserve the integrity of the grading process.

Other groups can improve on the patented idea and submit that as well, which creates a invaluable culture where the ideas of many outweigh those of only a few. The teacher can also serve as the judicial branch of the classroom, levying rulings and notifications of patent infringement. Those violating the patent can be hit with sanctions that include loss of capital (points) or restrictions within their work environment.

The obvious benefit of this patent culture lies in a system that encourages each student to be innovative in his or her solutions, but also to share this idea with the rest of the class. This instructional environment isn't reserved for just engineering classes. The Next Generation Science Standards require students to plan and carry out investigations.

We know from experience that students often struggle to design their own investigations. Students will even follow other groups down a path that is not productive, even when they know that they have the freedom to try out solutions of their own. To combat this, Ben awards points for creative and unique solutions that work, not unlike the patent idea. Others groups can use the ideas, again at a cost of a few points, but students have a real-world incentive for working ahead and carefully considering the work they are doing. There's been vast improvement in the quality and timeliness of student work since implementing this change.

This model has changed the culture of Ben's classroom. Students are excited to come and work and will often spend their free time in the room filled with passion and purpose. They are looking to create advantages by working ahead and developing the critical attributes of the digital citizenship standards that we were missing before — even inspiring class discussions about patent lawsuits that are seen in the news each day. The cultural shift has produced a more effective learning environment, one where students have more autonomy, ownership and are more innovative in the solutions to their learning challenges.

Ben Smith is a physics teacher at Red Lion Area High School in Pennsylvania. He teaches AP Physics and engineering and serves as science chair. He's been an educator for 27 years. Follow him on Twitter  @edtechben. Jared Mader is director of educational technology for the Lincoln Intermediate Unit in Pennsylvania. Prior to that, he was the director of technology for five years in the Red Lion Area School District. Follow him on Twitter @rlmader. Ben and Jared run their own consulting business called EdTechInnovators.

Did you miss Ben Smith's ISTE 2016 Ignite session, The Culture and Climate of an Authentic STEM Classroom? Don't worry! There is more powerful learning to come at ISTE 2017 in San Antonio, Texas.