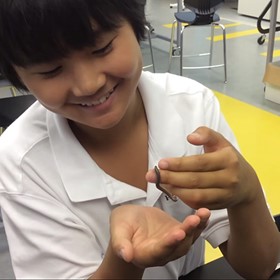 It’s generally a problem when students are dancing in a creek during science class. But not for middle school science teacher Brian Ravizza. He encouraged his students to sing and dance as part of a lesson where students created a music video to document their understanding of arthropods.

Seventh grade students at Hillbrook School in Los Gatos, California, began their field study of arthropods on campus. Rather than simply Googling arthropods, students were required to complete a field study of an arthropod species and tell the arthropod’s story through firsthand observations, not website research. They documented their species through video footage and macro photography.

Students captured so much original footage that they decided to make a video to show their work. When one student started to sing along to a video from The Biodiversity Group in Ecuador, kids got the idea to make a music video. Ravizza “followed the enthusiasm of a few students” and revised the project.

A common problem with documenting arthropods, particularly tiny ones like armadillidiidae (aka pill bugs), is that footage is blurry. But since the students knew this video would be shared broadly, they pushed their own abilities to record high-quality video of insects like a dragonfly nymph, a black widow and a centipede, to name a few.

The process helped increase their understanding as nascent scientists. Common problems, like a bug running into the dark during a photo, leads to further inquiry: “That makes me wonder….” Creating real-life experiences for students is a powerful way to lead students into deeper scientific inquiry.

This project addressed several of the ISTE Standards for Students, including Creativity and Innovation, Communication and Collaboration, Research and Information Fluency, and Technology Operations and Concepts.

What started out as a field study lesson became a passion project where an entire class photographed, filmed, sang and acted to create this collaborative music video.

Bill Selak is director of technology at Hillbrook School in Los Gatos, California. He was the 2014 recipient of the Kay L. Bitter Vision Award for integrating technology with vision and creativity in a PK-2 classroom. In 2013 he was selected as an ISTE Emerging Leader.
Tags
Digital storytelling
Video