Students can learn about flight by actually flying with Kinect 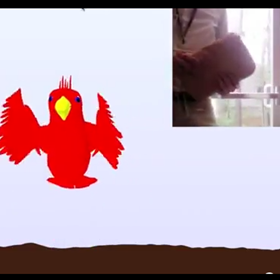 I learned how to fly at my hometown museum. Before that, if you had asked me to imitate the motions of a bird in flight, I would have flapped my arms up and down. While this is generally accurate, the actual biomechanics of flight are more complicated.

The exhibit limits visitors to flying the "correct" way. But trial and error is an important part of the learning process, and exhibits like this do not allow visitors to see a clear contrast between effective and ineffective wing motions.

That's why I developed a game that teaches kids about bird biomechanics. In this game, Flight School, students control a 3D bird avatar with their bodies.

Flight School presents knowledge about the correct way to fly but also allows students to experiment until they simulate proper wing pattern in a game-like environment. This type of exploratory freedom fits nicely with the ISTE Standards, as it promotes problem solving, critical thinking and creativity. As part of a life science unit, students can feel what it's like to be a bird. As part of a physical science unit, they can learn the physics of flight.

Best of all, any educator can implement this project using a laptop, free software and the Microsoft Kinect video game controller.

Here's how it works: A student stands in front of the Kinect, and sensors map the student to a 3D model of a bird. The bird is rendered on a grassy field below a tree branch with a piece of food in her beak. Perched on the branch is a nest with three hungry chicks.

If the student mimics a reasonable approximation of a bird's wing movement, the bird avatar will fly to her nest. However, if the student doesn't make the correct motions, the bird's wings will move accordingly, but the bird will stubbornly remain on the ground. This is an example of the student "failing." After a certain amount of time, the interface will politely overlay the correct path of the wings during flight over the background to help the user. Once the bird takes off, the student will need to keep flapping correctly to reach the nest, or the avatar will fall.

I presented my initial prototype of Flight School to the public at a local TEDx conference. College-aged participants expressed delight as they used their bodies to control their Flight School avatar on screen. Kids will find a similarly delightful experience and come away with a better understanding of the biomechanics of bird flight.

The bottom line is that students are having fun interacting with a simulation while they learn. Experiences are most useful for future problem solving if they are structured in an "explore-able" world, according to James Paul Gee of Arizona State University and the University of Wisconsin. Gee says the pinnacle of learning by simulation is the moment when we figure out a world, real or digital, without having to be told. A bird's wings in flight are a good example of this. If we are able to fly like birds, we would understand bird flight in a matter of minutes.

How to use Flight School

Here's how to implement this project in your classroom: